German aircraft designs were consistently among the most advanced and successful of the war. Of all the nations, Germany was the first to begin to make significant use of jet aircraft, although these nevertheless came too late in the war and in insufficient quantity to have a decisive effect on the course of the air war. The Luftwaffe (German air force) had a few advocates for the production of large four-engine bombers, most notably the prewar chief of staff general Walther Wever. However, with his death in April 1936, the idea of a strategic role for the Luftwaffe also died, and the German air force instead adopted the basic doctrine that bombers should be used tactically to support the ground troops directly by striking targets on or near the battlefield. By the time the war began, German bombers were used strategically to bomb civilian targets, especially London and other English cities during the Battle of Britain. However, because of prevailing Luftwaffe doctrine, Germany, unlike the United States and Great Britain, produced no significant four-engine bombers. Abortive plans were made for the “Amerika” bomber, a spectacular aircraft of intercontinental range, but nothing came of the project.

The Stuka. Perhaps the most infamous of Germany’s bombers was the single-engine Junkers Ju87, better known as the Stuka. Designed in the mid-1930s, the Stuka was a dive bomber, which deployed its 1,100-pound bomb load not from level flight but from low altitude, near the end of a sharp 80-degree dive. This ensured surgical accuracy of the strike. By 1942, it was even fitted with a single 4000-pound bomb, which was used against heavy tanks. After striking its target with bombs, the Stuka often circled around to strafe survivors with its three 7.9-mm machine guns. The aircraft was also fitted with sirens, so-called Jericho trumpets, which produced a truly terrifying scream during the high-speed dive. Thus, the weapon produced as much panic and terror as physical destruction.

Stukas were deployed with great effect in the invasion of Poland, the Battle of France, and the invasion of the Soviet Union. However, after these early operations, the 238-mile-per-hour, poorly maneuverable Stuka proved increasingly vulnerable to fighter attack and was reconfigured in 1942 as the Ju87G-1, a dedicated antitank aircraft.

Germany’s other significant bombers were twin-engine medium bombers and included the following.

Heinkel He111H-3. Crewed by four or five, the Heinkel first flew in early 1939. It was powered by two Junkers Jumo 211D-2 V-12 engines, each making 1,200 horsepower for a top speed, empty, of 258 miles per hour. Range was 745 miles and service ceiling 25,590 feet. The plane’s wingspan was 74 feet 1 3/4 inches. It was heavily armed with 7.92-mm machine guns in the nose cap, in the dorsal position, in a ventral gondola, in waist windows, in a fixed forward-firing position, in the side of the nose (could be operated by the copilot), and in the tail. The plane also had a 20-mm cannon on a fixed mount in the front part of the ventral gondola. Bomb load was up to 4,410 pounds. 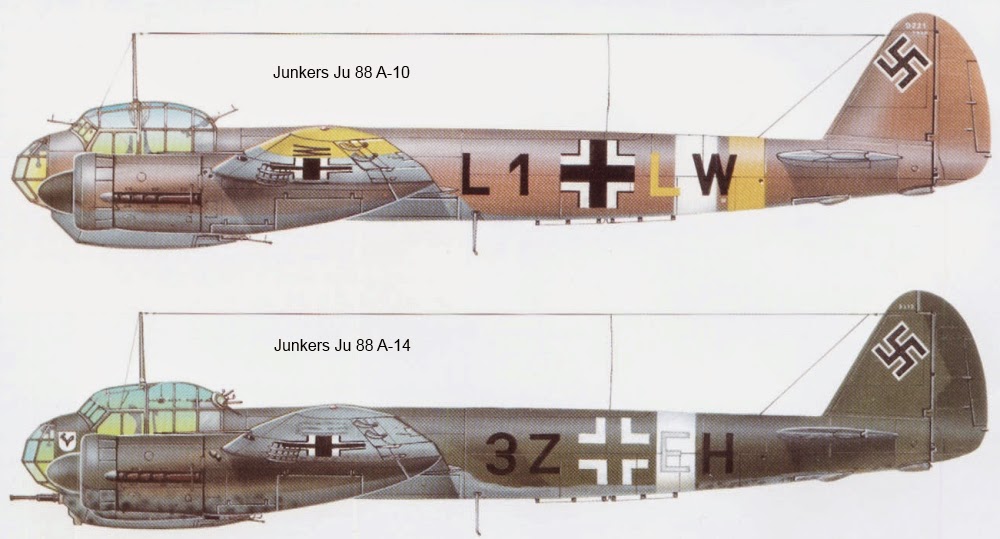 Junkers Ju88A-4. A very successful design, 14,676 were built in all versions. About 9,000 were configured as medium bombers. The rest were configured mostly as night fighters. The versatile aircraft was used throughout the war, beginning with operations in Poland in 1939 and against just about every enemy Germany fought. The Ju88A4 version was capable of operating as a level bomber, a dive bomber, and a torpedo bomber. Generally, the bomb load consisted of 10 50-pound bombs loaded internally with as many as four bombs of various types fixed to hard points under the wings. A pair of torpedoes could also be mounted under the wings. Wingspan was 65 feet 10 inches, and the plane was driven by a pair of 950-horsepower Junkers Jumo 211 F engines. Top speed was 292 miles per hour, ceiling 26,900 feet, and range 1,106 miles.

Dornier Do 217K/M. The Do 217 series of bombers became operational in March 1941 and represented a significant advance over the Do 17. In addition to serving as a level bomber, the Do 217 could be configured as a night fighter, a torpedo bomber, and a reconnaissance aircraft. By August 1943, the aircraft was also being used to carry anti-shipping missiles, and by September, it was delivering guided bombs against warships. Production reached 1,905 of all types, including some 1,366 level bombers. The Do 217K and M versions were crewed by four and powered by two 1,700-horsepower BMW 810D 14-cylinder radials (K) or two 1,750-horsepower Daimler-Benz DB603A inverted V12s (M). Top speed was 320 miles per hour, service ceiling 24,600 feet, and range 1,430 miles. Wingspan was 62 feet 4 inches, and, for the M version, armament consisted of four 7.92-mm and two 13-mm machine guns with a bomb load of 8,818 pounds; the K version added two underwing FX-1400 Fritz X radio-controlled bombs, two FX-1400 bombs, or two Hs 293 missiles.

Junkers Ju188E-1. Produced in reconnaissance (designated D) and bomber versions (designated E), the Ju188 series was crewed by five and first flew in 1940. About 1,100 were produced during the war. The Ju 188E was powered by two BMW 801G- 2 18-cylinder two-row radials, each producing 1,700 horsepower for a top speed of 310 miles per hour. Service ceiling was 31,510 feet, and range was 1,211 miles. Wingspan was 72 feet 2 inches. Typically, the aircraft was armed with a single 20-mm cannon in its nose and three 13-mm machine guns, one in a dorsal turret, one manually aimed from the rear dorsal position, and one manually aimed from the rear ventral position; in some configurations, twin 7.92-mm machine guns were substituted for the last position. Typical bomb load was 6,614 pounds loaded internally, or two 2,200- pound torpedoes under the wings.

Heinkel He177A-5. This was the largest bomber Germany actually deployed, with a wingspan of 103 feet 1 3/4 inches and a bomb load capacity of 13,228 pounds. It was powered by two massive 3,100-horsepower Daimler-Benz DB610 coupled engines. This design feature was an innovative attempt to reduce drag, but it created severe reliability problems that often resulted in engine fires. Fully three-quarters of the preproduction prototypes crashed; 1,146 were produced, and while the 3,100-mile range was badly needed by the Luftwaffe, the airplanes were not very effective as strategic bombers. They were used with moderate effectiveness in an antitank role. Top speed was 295 miles per hour and service ceiling 26,500 feet. Armament consisted of one 7.92-mm machine gun manually aimed in the nose, one 20-mm machine gun manually aimed in the forward ventral gondola, two 13-mm machine guns in a front dorsal turret, one in the aft dorsal turret, and one 20-mm cannon in the tail position.

Arado Ar234B-2. Of greater historical than practical significance was the Arado Ar234B-2, the world’s first jet bomber, which became operational at the end of November 1944, too late to have any impact on the course of the war. Powered by a pair of BMW 003A-1 jets, each developing 1,764 pounds of thrust, the Arado had a top speed of 461 miles per hour and could carry 4,409 pounds of bombs over a 1,000-mile range. Service ceiling was 32,810 feet. For defensive purposes, the Arado carried two 20-mm cannon. Only 210 were built.

German fighter designs were generally more successful and more innovative than its bomber designs. The two most important fighters were the Messerschmitt 109 series and the Focke-Wulf 190 series. 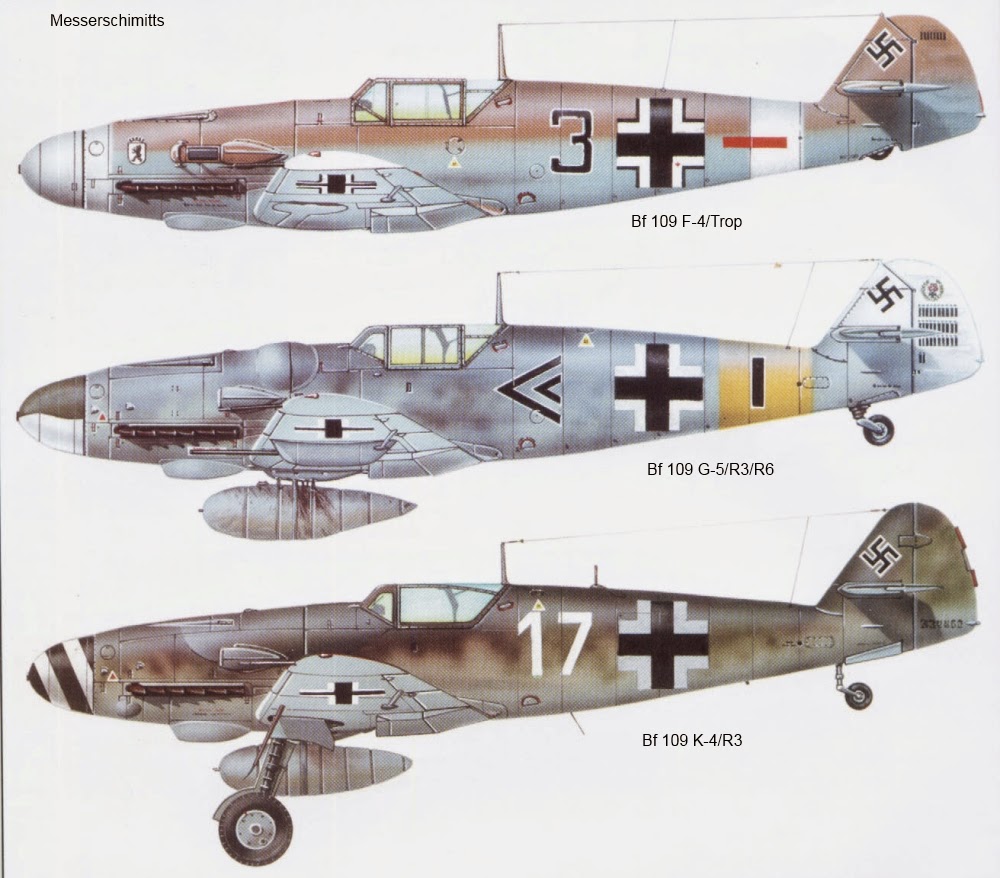 Messerschmitt 109. The Messerschmitt 109 first flew in October 1935, powered by British Rolls- Royce Kestrel engines. The aircraft entered Luftwaffe service in spring 1937 and received its baptism of fire in the Spanish civil war. By the beginning of World War II, the aircraft existed in a number of variants, and 1,000 were deployed against Poland in September 1939. The 109 was superior to most other fighters at the outbreak of the war but was fairly evenly matched with the British Spitfire and Hurricane in the Battle of Britain. It did have one very significant advantage over these rivals, however. Its fuel injection system allowed for a constant fuel flow even in negative-g conditions, which meant that a pilot could dive or shear away much more quickly than his opponents. This added significantly to the plane’s survivability. Counterbalancing this advantage, however, was the 109’s limited range—a 300-mile operating radius for the 109G. This gave the fighter precious little combat time over relatively remote targets such as those in England.

Some 109 variants had a cannon placed in the hollowed-out nose cap. In early models, this created an unacceptable level of vibration, which, however, was eliminated in later versions. Additionally, most of the fighters were fitted with two wing-mounted cannons and two machine guns mounted on the top of the nose cone that were synchronized to fire through the propeller arc. The 109G, introduced in 1942, was powered by a Daimler- Benz DB605 1,475-horsepower engine to a top speed of 387 miles per hour at 23,000 feet. Wingspan was 32 feet 6 1/2 inches. The backbone of the Luftwaffe, some 30,000 109s were built before the end of the war.

Focke-Wulf Fw 190. Superior even to the formidable Messerschmitt 109 was the Focke-Wulf Fw 190, which made its first flight on June 1, 1939. It first saw action in the Battle of France in September 1941 and was markedly superior to the British Spitfire. Most Fw 190s were the A series, powered by a single BMW 801 2,100-horsepower radial engine. However, late in 1943, the D was deployed against U.S. bombers, powered by the Jumo 213 inline, liquid-cooled engine, which developed only 1,770 horsepower but had improved performance, producing a top speed of 426 miles per hour, 18 miles per hour faster than the A version. In all, some 20,000 Fw 190s of all types were built before the end of the war. Wingspan of the D type was 34 feet 5 1/3 inches, and armament consisted of two 20-mm wing-mounted cannon and two 13-mm machine guns in the nose. Range was 520 miles and service ceiling 40,000 feet. 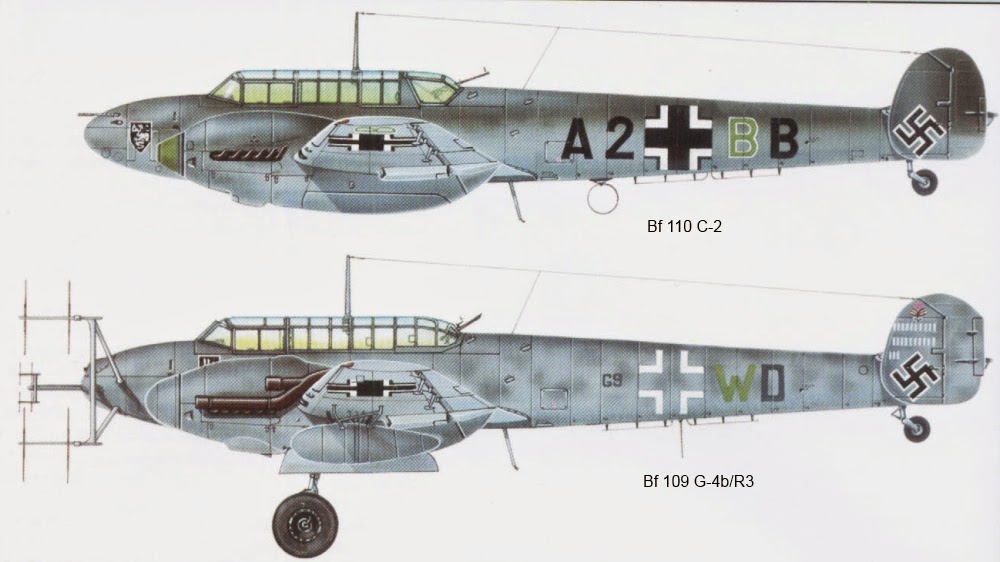 Messerschmitt Bf 110. The twin-engine Messerschmitt Bf 110 made its first flight in May 1936. With all-metal construction and a crew of three, the aircraft was powered by two Daimler Benz DB 601 engines, each making 1,100 horsepower and propelling the plane to a maximum speed of 336 miles per hour over a range of 680 miles. Wingspan was 53 feet 4 inches, and armament consisted of five machine guns and two 20-mm cannon. Formidable as all this seems, the aircraft performed poorly in the Battle of Britain. This prompted a redesign with the inclusion of radar, which transformed the Bf 110 into the Luftwaffe’s finest night fighter. In all, nearly 6,000 Bf 110s were produced before the end of the war.

Jet and rocket-propelled fighters. Late in the war, in 1944, Germany introduced both jet- and rocket-propelled fighters. The Messerschmitt 163B was powered by a single Walter rocket motor developing 3,700 pounds of thrust and capable of reaching 590 miles per hour at 20,000 feet. Range, however, was extremely limited. Armed with two 30-mm cannon and 24 R4M rockets, the 163B had a wingspan of 30 feet 7 inches. Very few were produced. More significant, however, was the jet-powered Messerschmitt 262A, with two Junkers 004 jets, each making 1,980 pounds of thrust, mounted under the wings. Top speed was 540 miles per hour over a range of 420 miles. Armament was limited to four 30-mm cannon. The aircraft was designed primarily to attack Allied bombers, which it did very effectively. Had the aircraft been introduced earlier and in much greater numbers, its impact on the air war over Europe would have been profound.