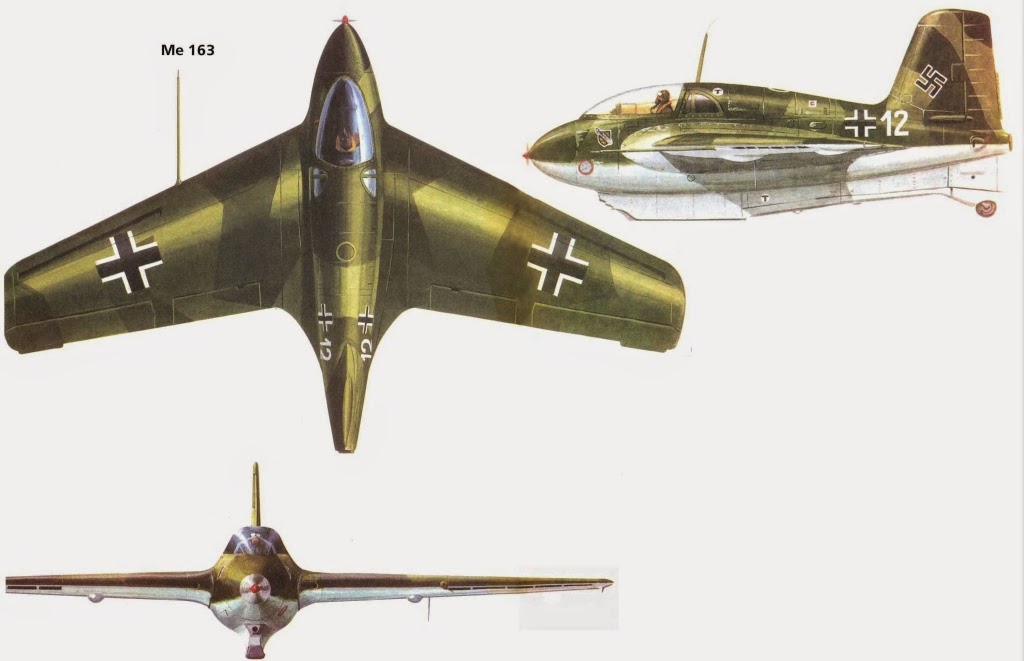 'White 14' - an Me 163B-1a of 1/JG 400, which operated from near Leipzig between July 1944 and April 1945, defending the Leuna-Merseburg refinery complex. Two Me 163B-las were handed over to a special Luftwaffe unit early in 1943 to allow pilot familiarisation to begin, though it was July before training actually commenced. The high landing speed of the 'Komet' (around 220km/h; 140mph) combined with the fact that the pilot was committed to it from the outset, having no power available to allow him to regain height for a second attempt, resulted in many accidents, most of them fatal. The first operational unit, equipped with Me 163B-la aircraft, with a pair of 30mm cannon in the wing roots and a considerable degree of armour protection for the pilot, began forming at Wittmundhaven in May 1944, and first went into action as 1/JG400 on 16 August. It scored its first success some days later, when Leutnant Hartmut Ryll downed a B-17 near Leipzig.

On 24 August 1944, Several B-17's were attacked, with Fw. Schubert claiming two B-17s downed (another is claimed by other pilots). His wingman also downed a B-17. One Komet was shot down by bomber gunners.

On 11 September 7 aircraft attacked a United States Army Air Forces (USAAF) bomber formation, and 3 B-17's were claimed shot down. On 7 October two B-17s were claimed, but two more Komets were lost. By 24 September JG 400 had 11 serviceable Me 163s available, but was short of competent pilots to fly them. The Komets flew operationally on 5 days during the month, but highest number of rocket fighters involved was on 28 September, when 9 were committed. During the same month the two main factories producing the volatile fuel were seriously damaged in bombing raids, and the resulting shortage of fuel would hamper JG 400 for the rest of the war

Tactics were soon developed; typically to zoom through the bomber formations up to an altitude of 40,000 feet (12,000 m), and then to power-dive down through the formation again. This theoretically gave the pilot two chances to aim and fire a few bursts of 30mm cannon fire before gliding back towards the home airfield.

Allied fighter formations countered the Komet in several ways; the extremely short endurance was soon noted, and once in a glide the Komet was highly vulnerable to any escort fighter. Brandis was quickly identified as JG 400's home airfield and strafing attacks curtailed operations.

Many other tactical issues faced the JG 400 pilots apart from the inherent instability of the aircraft and its fuel. It was found very difficult to aim and fire the guns accurately at such high approach speeds. A number of solutions were tried out, the most innovative being fitting a battery of six 50mm mortars, firing upwards. The mortars were fired by activation by a photocell in the upper surface of the aircraft. When the Komet flew under the bomber, the shadow of the aircraft above triggered the mortar rounds to be fired. Research suggests this arrangement was only used once in combat, reportedly destroying an Royal Air Force (RAF) Halifax bomber.

Although over 300 Me 163B's were produced (including a few Me 163-Cs with increased fuel), only 9 confirmed air victories were credited to JG 400 by the end of the war, for 14 Komets lost from all causes ( mainly crashes and accidents).