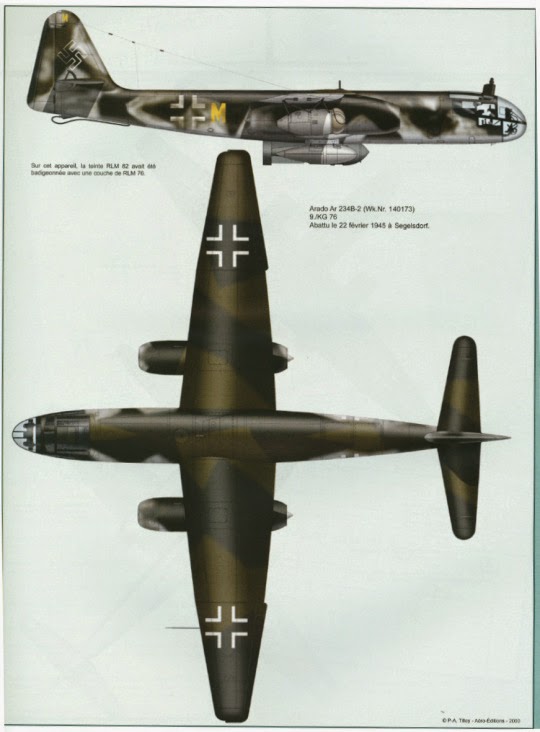 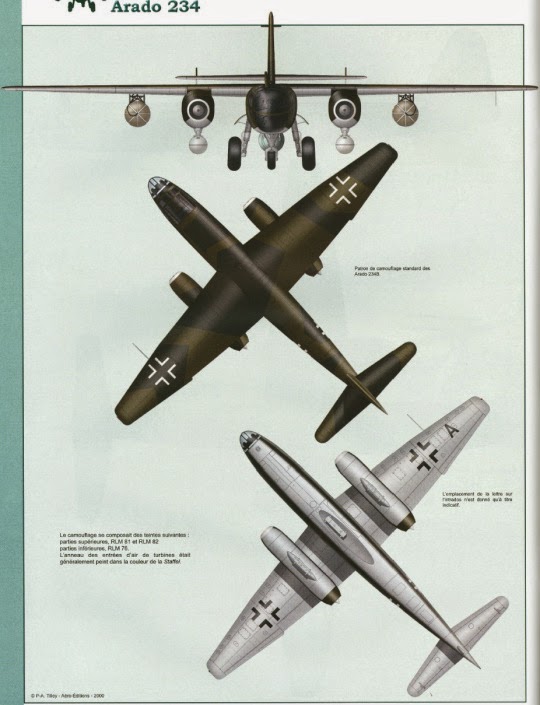 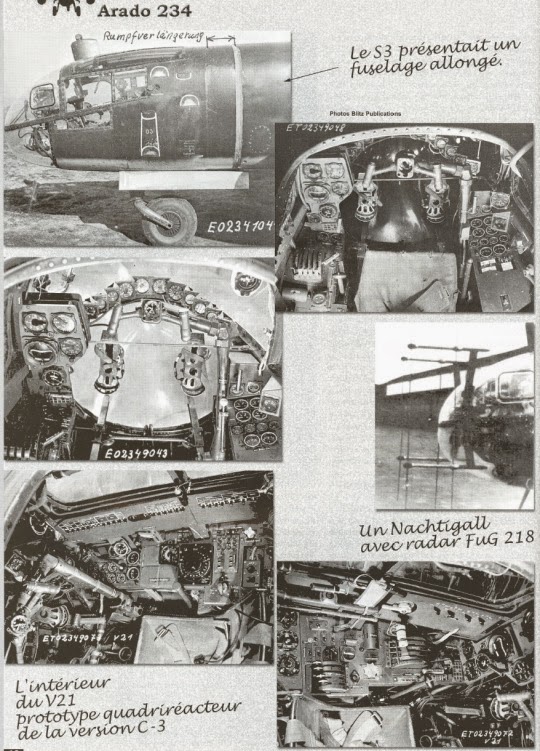 The Ar 234B Schnellbomber, or `fast bomber’ introduced a widened fuselage which permitted conventional landing gear. Although it had a very narrow track the aircraft performed well when taxiing, taking off and landing and was not unduly vulnerable to crosswinds. The B model – first flown March 10, 1944 piloted by civilian test pilot Joachim Carl – was slightly heavier than the reconnaissance versions at 21,720lb. Because the Ar 234 was slender and entirely filled with fuel, it had no room for a bomb bay; its bomb load had to be carried on external racks. The added weight and drag of a full bomb load reduced the speed, so on the B model two 20mm MG 151 cannons with 200 rounds each were added in a remotely-controlled tail mounting to give some measure of defense. Since the cockpit was directly in front of the fuselage, the pilot had no direct view to the rear, so the guns were aimed through the periscope. There is no record of anyone ever hitting anything with these guns and many pilots removed them to save weight.

It was not until June 1944 that 20 Ar 234Bs were produced and delivered, with some of these being diverted to the Luftwaffe test centre at Rechlin. From October 1944 Kampfgeschwader 76 (KG 76) began to convert to the type, with the group flying missions during heavy fighting in the Ardennes region. By the time of the intense flurry of fighting around Remagen, which saw the most combat sorties by the Ar 234, many Allied pilots had run up against the wunderwaffen and had tested their propeller-driven aircraft against the jets. One of them, Capt Don Bryan, a P-51D Mustang ace of the 352nd Fighter Group, dubbed the `Blue- Nosed Bastards of Bodney,’ spoke about his experience.

Close Encounter
At high altitude, east of the Rhine bridgehead on March 14, 1945, Bryan was on his way home from a bomber-escort mission when he spotted an Ar 234 (one of eleven from flying unit KG 76, as it would later transpire) making a bombing run on the newly constructed pontoon bridge at Remagen.

In fact, despite gaps in his knowledge, Bryan may have known more about the Ar 234 than anyone else on the Allied side. While most Allied pilots never even glimpsed one, this was Bryan’s fourth encounter with an Arado. In December 1944, he became the first Allied pilot ever to see one in the air. After studying drawings of the jet in a Group Intelligence document, Bryan spotted Ar 234s on two more occasions later that month. During his third sighting, the Luftwaffe warplane crossed beneath his flight path, from left to right. Bryan went after the Arado but it pulled away. That’s when he realised that while his P-51 was fast, the Ar 234 was almost 87kts faster.

“I’m not letting one get away from me again,” Bryan thought out loud.

Bryan saw the Arado pulling away from the bridge and manoeuvring into a tight turn to evade a formation of USAAF Republic P-47 Thunderbolts. This manoeuvere compromised the jet bomber’s strongest asset – its superior speed – and Bryan was able to position himself so the German would have to fly toward him.

Bryan dived at the bomber and fired a burst of .50-caliber gunfire that disabled its right engine. Now, Bryan was able to stay behind him and continue firing. “I don’t know what the hell was on his mind,” said Bryan, “but he should have gotten out of that airplane while he was high enough. I think he was afraid I would shoot at him in his parachute, which I would never do.” The Arado pilot, Hauptman Hans Hirshberger, waited too long to jettison his roof hatch and attempt to escape from his cockpit. He went down with the aircraft. It was his first and only combat mission.

Variants
The Ar 234 always retained its definitive, twin-engined layout in service, but two different configurations of a four-engined version were built and flown. The sixth and eighth planes in the series were powered by four 1,764lb/thrust BMW 003A-1 turbojet engines instead of two Jumo 004s. The sixth (Ar 234 V6), first flown on April 8, 1944, had four engines housed in individual nacelles whereas the eighth (Ar 234 V8) made its initial flight on May 13, 1944 with two pairs of BMW 003s installed within twin nacelles underneath either wing.

These were the world’s first four-engined jets but offered no performance advantage over the twin-engined version.

An improved Ar 234C was the final production version. This model introduced an improved pressurised cockpit and larger main wheels. A `crescent-wing’ Ar 234 – foretelling the Handley Page Victor bomber of the 1950s – was under construction but never flown.

Pilot’s Perspective
“I liked the Arado very much,” noted Kriessmannn in an interview. “It was a wonderful aeroplane. I thought it was designed better than the Me 262. It was a single seater so we didn’t have time to practise much so we had some `dry classes.’ Landing and taking off was very different from a prop’ `plane.” Kriessmannn also noted that the RATO units often didn’t work properly.

Kriessmann remembered taking the Ar 234 up to 36,000ft while on oxygen. Here the aircraft was significantly faster and he said he reached 487kts in level flight.

Kriessmannn was assigned to ferry Ar 234s from the factory “to different places where they installed optical equipment and bombing equipment. I flew the first one on December 12, 1944, from Hamburg to Kampfgeschwader 76 and the last on May 1, 1945.” KG 76 flew the final Ar 234 sortie of the war against advancing Red Army troops near Berlin.

Dashed Hopes
Plans existed for the manufacture of 2,500 Ar 234 Blitz bombers but they were cut short by the war’s end. Total production was 224 examples of all versions of the Ar 234. Today, the only surviving aircraft in this series is an Ar 234B-2 on display at the Udvar-Hazy Center of the National Air and Space Museum, Smithsonian Institution, at Dulles, Virginia, replete with RATO units. It is one of the aircraft Kriessmann flew.

Some aviation experts believe that the Jumo 004’s technical problems could have been overcome earlier, that other reasons never fully explained were responsible for delays with this aircraft and that hundreds of Ar 234Bs could have been in service by the time of the fighting in the Ardennes. The Arado jet bomber, they say, could have substantially delayed the Allies’ victory. Others insist that, while the Ar 234 was a technical marvel, the Allies had the enormous advantage of sheer numbers of men and machines. By this reasoning, the Ar 234, despite its high-tech qualities, could not have delayed the war’s inevitable outcome.