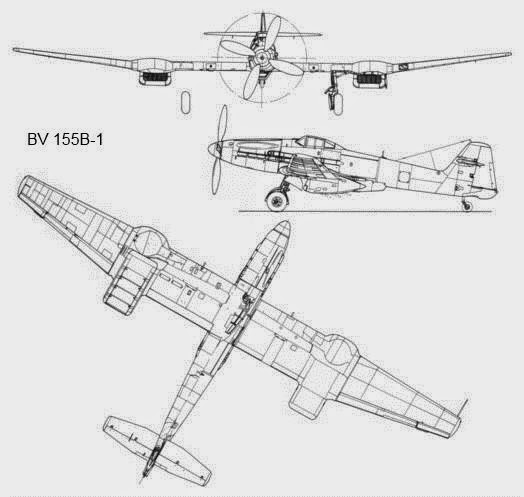 The Blohm & Voss Bv 155 was a high altitude interceptor aircraft intended to be used by the Luftwaffe against raids by the USAF when the performance estimates of the B-29 Superfortress first started reaching German command in early 1942. The B29 had a maximum speed of around 563 km/h (350 mph) and would attack in a cruise at about 362 km/h (225 mph) at 8,000 to 10,000 m (27,000 to 32,000 ft), an altitude that no German plane could operate at effectively. In the hope of countering attacks by this formidable bomber, the Luftwaffe would need new fighters and new destroyers as soon as possible.

Me 155B
By the end of 1942, the increasing number of USAAF bombing raids and intelligence coming in about the new American B-29 bomber led the Luftwaffe to envisage a pressing need for an effective high-altitude interceptor. Messerschmitt adapted its design to this requirement under the designation Me 155B. The engine was to be the DB 628, which was basically a DB 605A with a two-stage mechanical supercharger with an induction cooler. A pressurized cabin was to be provided. It was estimated that a service ceiling of 14,097 m (46,250 ft) could be attained.

A converted Bf 109G adapted to take the DB 628 engine flew in May 1942 and attained an altitude of 15,500 m (50,850 ft). However, the Technische Amt concluded that a DB 603A engine with an exhaust-driven turbosupercharger was more promising. The DB 603A provided 1,201 kW (1,610 hp) for takeoff and 1,081 kW (1,450 hp) at 15,000 m (49,210 ft). This engine change required that the fuselage be elongated in order to house the turbosupercharger aft of the pressure cabin. Exhaust gases were carried to the turbosupercharger via external ducts. Air was drawn in through via a ventral trough aft of the wing. Standard Bf 109G wings were to be fitted outboard of a new, long-span, untapered wing center section. Other parts were scavenged from existing Messerschmitt designs – the vertical tail was from the Me 209, and the horizontal tail and the undercarriage were taken from the Bf 109G.

BV 155A
In September 1943, an order for five prototypes was placed. Blohm & Voss decided that the design problems still needed fixing, but by late 1943 they still hadn't been addressed. A meeting was called to finally address these problems, but the Messerschmitt people didn't bother to show up. As late as November 1943 changes were still being made, and Blohm & Voss decided to remove the complex underwing radiators favoured by Messerschmitt for two large scoop-type units mounted above the wings. B&V built a mock-up and had it tested in the LFA wind tunnel, but Messerschmitt refused to help. Late in 1943, Blohm & Voss formally advised the RLM of their problems with Messerschmitt and implored them to intervene. By this point, the T-Amt was just as fed up, and removed Messerschmitt from the project entirely.

The design, now named the BV 155A, was finally completely in the hands of one design team. B&V modified the design with a completely new laminar flow wing in place of the original "extended" one from the Me 155. They also changed details of many other parts of the plane, including new landing gear (from the Ju 87) and a new tail unit. Further wind tunnel testing showed that there was a serious problem with the overwing radiators, at high angles of attack the wing "blanked" them from the airflow and cooling would suffer. The decision was made to abandon the A model completely and move on.

BV 155B
The Blohm & Voss team elected to adopt a laminar-flow airfoil section, and abandoned the idea of using standard Bf 109G wings for the outer panels. The wing center section was redesigned. Two large radiators were mounted over the wing trailing edges at the extremities of the center section. Ju 87D-6 undercarriage legs and wheels used instead of the Bf 109G units. The Bf 109G horizontal tail surfaces were replaced with larger area freshly designed units, and the vertical tail surface was increased in size.

The first prototype was designated BV 155 V1, and flew for the first time on September 1, 1944. Tests with the V1 showed that the outboard radiators were not sufficiently effective in providing cooling, especially at high angles of attack. The intakes on the next prototype were enlarged and underslung beneath the wing rather than placed over it. However, the enlarged radiators caused a CoG problem, which required moving the pressurized cockpit forward. The Blohm & Voss team took this opportunity to replace the original Bf 109G canopy with an aft-sliding all-round vision canopy, and the rear fuselage decking was cut down. This in turn required that a larger rudder be fitted. The ventral radiator bath was also enlarged.

All these changes were incorporated into the BV 155 V2, which flew for the first time on February 8, 1945 which was the first genuine B series aircraft. The Blohm & Voss team was still not satisfied with the design, and before the V2 began its flight trials they proposed that the engine be switched to the DB 603U having the larger mechanically driven supercharger of the DB 603E. The DB 603U promised a power of 1,238 kW (1,660 hp) for takeoff and 1,066 kW (1,430 hp) at 14,935 m (49,000 ft). The ventral turbosupercharger was retained. The Technische Amt decided to accept this proposal, and abandoned all work on the BV 155B in favor of the revised design, which was designated BV 155C.

Projekt 205
While all of this was going on, Blohm & Voss designers had been working on additional changes under Projekt 205. P.205 replaced the underwing radiators with an annular one around the front of the engine, a design feature commonly found on a number of German designs. With the wings now free of clutter, they were considerably simpler and were reduced in span. This also had the side effect of reducing the track, which would later prove to be a welcome change. The new design would be simpler, lighter and faster, and plans were made to make it the standard version of the aircraft. During the October re-evaluation, it was agreed that V1 through V3 would be completed as B models, while a new series of five would be completed to the new standard as the BV 155C. 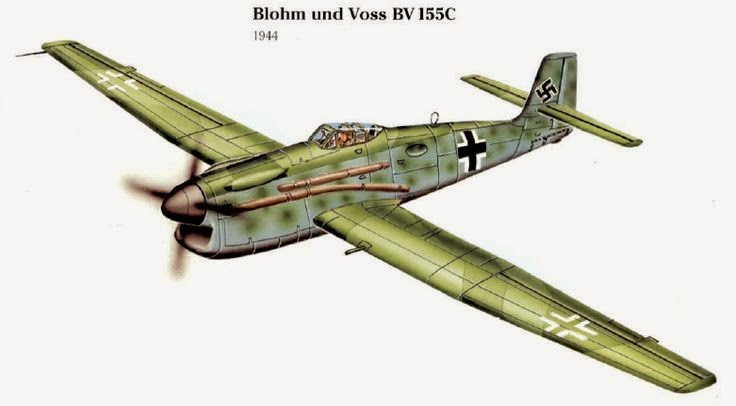 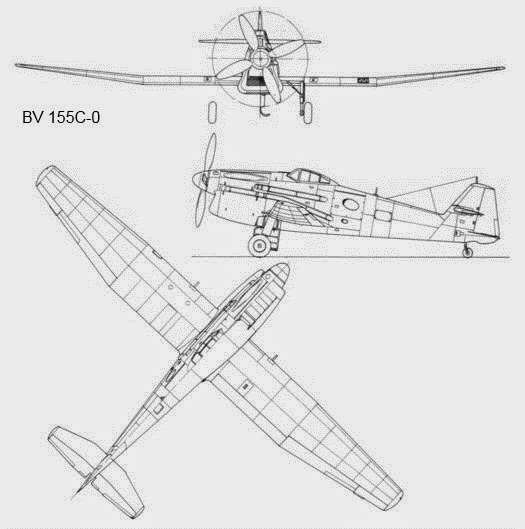 BV 155C
The BV 155C was quite different in appearance from the BV 155B. The clumsy wing-mounted radiators of the BV 155B were eliminated, and the main landing gear leg attachment points were moved inboard to retract inwards. The cooling was provided by an annular frontal radiator à la Ta 152. Large circular intakes were attached to the fuselage sides above the wing roots.

In the meantime, the BV 155 V2 was damaged beyond repair during a bad landing. It was to be replaced in the test program by the BV 155V3. The BV 155V3 differed from the V2 in having the DB 603U intended for the BV 155C. However, the engine cowling and turbosupercharger were unchanged.