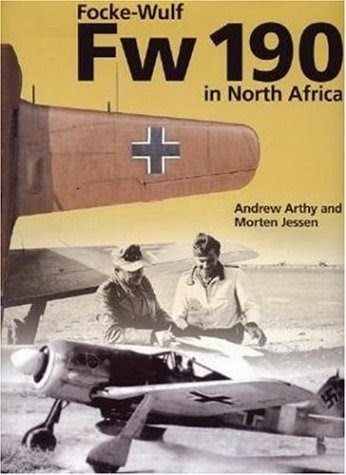 For someone with a special interest in the operational history of Germany’s superb radial-engined fighter of WWII, the Focke-Wulf Fw 190, the brief period this fighter spent in the North-African theatre of operations has always been a bit mysterious to me. Very little has been written on this subject and it seems that even fewer photos were available. And those that were available tended to be re-published countless times. Who haven’t seen the classic shots of Fw 190A-5 KM+EY?

I was therefore pleasantly surprised when I read on Andrew Arthy’s Fw 190 website that a book on this subject was forthcoming. At first opportunity I bought it.

Let me start by concluding that this is a masterpiece of aviation writing! As a scientist I am very, very pleased to see the academic approach taken by the authors when writing this book. By this I mean that not only is the research conducted thorough and extensive but it is also presented in the best possible manner, at least in this reviewer’s opinion. The authors use footnotes extensively throughout their work and this is conveniently placed below each page. I would strongly urge all aviation authors to use this system as it is very easy to find the required reference and a great aid in one’s own research. Fortunately, it seems to be a trend in aviation writing of late.

The authors present their work in a chronological day-to day manner, another approach I must admit I am inclined to favour! The book is broken down into ten chapters, five appendices, a reference section (in addition to the aforementioned footnotes) and thankfully a personnel index. The chapter breakdown is as follows:

Even if emphasis is on Fw 190 operations the allied perspective is not forgotten and combat reports and war stories from several participating American and British are presented. Together with the German view these are an interesting documentation of an air war that has often been overlooked in the past. At the end of each chapter the authors present their “conclusions”, an assessment of the Fw 190 units’ significance and achievements during the time period just described. An interesting way to end each chapter, I think! There are also a few bibliographies in the book, like that of Kurt Bühligen and Erich Rudorffer. Interspersed among the text are various small tables, like summaries of Fw 190 claims or losses for a given period or of unit commanders.

Moving on to the aircraft profiles all that is needed to say is that they are by Claes Sundin! Everyone with an interest in aviation art knows what that means. The profiles included in the book are some of the very best I have seen, indeed some of the best from Sundin’s hand, even if I am not entirely partial due to my interest in the Fw 190. Naturally the emphasis is on the Fw 190 (12 of the 15 profiles are devoted to the fw 190, including the two plan views) but there are one of a Bf 109G-4/R-6 (Franz Schiess’ Black 1, probably thrown in for the Bf 109 guys!), an American Spitfire V and a French P-40F. Sundin has also made three maps in colour of the areas of operations.

A crucial aspect of any Luftwaffe book, at least it is the one aspect I tend to consider the most, is the choice of photos. I am sure that the authors have done their utmost to find new photos and there were several here that were new to me. Of course there are old “friends” like the above-mentioned shots of KM-EY, but they have also managed to find a few new ones of this machine that I have not seen before. There are not really any big surprises as far as photographs are concerned, although the Gruppeemblem of III./SKG 10 was one that I have not seen in print before. Furthermore, I find the shots of White 1/White E fascinating, especially since this machine apparently belonged to Eprobungskommando 19, the first fw 190 unit in North-Africa who only carried out non-operational tests. There are also four pages (appendix V) devoted solely to presenting more photographs, including many of KM+EY and four of a captured Fw 190A-4 with strange red-white-blue tricolor markings painted over the German national insignia.

If I have to find a negative point with this book it is that the photos are far to small for my comfort. At least some of them are deserving of much more space than they have been allocated. The majority of the photographs are only approximately 9x6 cm or smaller and that is not enough. I have been told that this is the choice of the editor and not the authors. Good thing that the profiles span an entire page and are reproduced with excellent clarity.

The appendices include the obligatory claims and loss lists but also a section on Jabo escort missions and, for modellers, a section on camouflage and markings. Perhaps surprisingly for many, the majority of the Fw 190s depicted in the book did not carry tropical camouflage, but the regular greys. Finally, there’s a list of Fw 190s captured in Tunisia.

This then, is my impression of this work. If it is not clear already let me say it again, this book is excellent, it represents marvellous scholarship and is obviously the result of a passion for the chosen subject and I can only look forward to any future titles from these authors.


The aim of Air War Publications is to continue to publish thoroughly researched books and eArticles on subjects that have not previously been covered in depth, with all books and eArticles to be fully illustrated with many photographs, colour profiles, diagrams and maps. We wish our readers to discover history through a broad range of subjects, with interesting stories ranging from those of famous fighter pilots to the unknown soldier who experienced the war, but whose story is untold.

Air War Publications also provides high-quality artwork prints from the talented and well-respected profile artist Claes Sundin. You can see his artwork under the menu ‘Artwork‘ and related sub-pages.

Posted by Mitch Williamson at 8:34 PM

Email ThisBlogThis!Share to TwitterShare to FacebookShare to Pinterest
Labels: Media