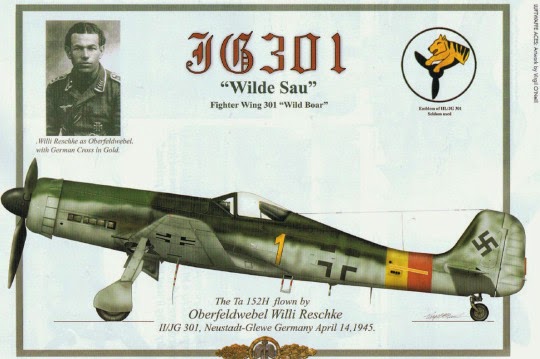 Flying the Focke Wulf Ta 152, the ultimate piston engine fighter.   It was to be nearly three years after initial reports of the standard Fw 190 A model’s performance shortcomings had first arrived in Bremen before service deliveries started of the ultimate Fw 190, so radically different in external appearance and performance that it was re-designated ‘Ta’ after its famed designer, Kurt Tank. The H model of the Ta 152 was the end of the line and, credited with a maximum speed of 472 mph at 41,000 ft, came close to the limits of what was possible using a piston engine.

There were many technical challenges to overcome in the conception of a fighter that would likely see combat at altitudes about one-third higher than either the Bf 109 or Fw 190 types already in production. By summer 1944, the need for the new aircraft was becoming acute.

American heavy bomber raids were increasing and the bomber’s fighter escort was operating at higher altitudes. The Ta 152 had tremendous potential. Unlike the BV 155, a highly experimental, flying test-bed, Tank’s design simply joined a powerful engine, already proven in the Fw 190 D, to an existing airframe tweaked to perform at higher altitudes. The result was an aircraft faster and more maneuverable than the P-51 Mustang and the P-47 Thunderbolt.

The first Ta 152 series aircraft to leave the production line at Cottbus were a batch of 20 pre-production Ta 152 H-0s which were delivered in October and November 1944 to Erprobungskommando Ta 152, commanded by Hptm. Bruno Stolle and based at Rechlin. This unit was responsible for service testing the new fighter although the pressure of events and the soundness of the design led Stolle to recommend a rapid introduction into service. At the close of November, the Ta 152 H-1 began to trickle off the lines, 34 being completed by year’s end. It was not until 27 January 1945 that the first Jagdwaffe service pilots set eyes on the new fighter as Willi Reschke relates in ‘JG 301/302 Wilde Sau';

“On 23 January 1945 on orders from the OKL (Oberkommando der Luftwaffe) Jagdgruppe III./JG 301 was temporarily taken off operations and designated an Einsatzerprobungsverband, a combat test unit, re-equipping with the legendary Ta 152 ” something we’d long given up hoping for.”

In the early hours of 27 January the Gruppe’s pilots were taken by truck to the Neuhausen aircraft plant near Cottbus with orders to ferry the new Höhenjäger to Alteno.

‘Arriving at the airfield at Neuhausen we were confronted with our first sight of the Ta 152 H-1, which with its enormous wingspan and lengthened engine cowl hardly looked like a fighter aircraft at all. With feelings of unease we walked around the machines drawn up in three rows (twelve aircraft in total). Technicians were on hand to answer our queries. After a talk on the technical aspects of the machines that lasted barely 30 minutes, we took the aircraft on charge… I got airborne at 11:08.’

As Reschke opened up the throttle the enormous power developed by the Jumo 213 E forced the pilot back into the seat and after a roll of just a few hundred meters and at 210 kph the big fighter lifted off effortlessly. Flap and gear retraction was smooth and with the 60cm wide blades paddling through the air the climb to 10,000 meters took just 12 minutes. At this height the aircraft behaved impeccably. That same afternoon the twelve aircraft were lined up on the field at Alteno. The well-known, indeed the only known photo of operational Ta 152s published was in all likelihood taken that same day. The first Ta 152 loss occurred on 1 February 1945 when Uffz. Hermann Dörr crashed in WNr. 150 037 while on a test flight. The pilot’s only real concerns centred on the reliability of the three-speed supercharger and a report sent by Gruppenkommandeur Guth to the OKL relating to this test phase stated that the pilots of III./JG 301 were unanimous in their praise of the new fighter. Pilots particularly enthused over the fighter’s maneuverability and at heights of 6,000 to 8,000 considered it hugely superior. An unnamed pilot flying his second sortie in an H-0 completely outmaneuvered a Fw 190 A-8 flown by an experienced pilot in mock combat at all heights.

The pilots of III./JG 301 were eager to fly the new fighter in combat. The nearby city of Dresden had been pounded to destruction during the night and early morning of 14 February 1945 by RAF Bomber Command and the US 8th Air Force. III./JG 301 had been forced to stay on the ground even though the explosions detonating in the city could be heard on the field at Alteno. Although III./JG 301 had been slated to fully re-equip with the new Ta 152 before resuming operations, there were never more than sixteen to twenty aircraft instead of the planned 35 available. The dispersed production of the type suffered all sorts of bottlenecks against a background of impending collapse. The Marienburg assembly plant in East Prussia was soon overrun by the Soviet’s rapid advance, as was ultimately the Cottbus facility itself. The Soviet advance also soon forced a move from Alteno, which had found itself a front line airfield harbouring a variety of Schlacht and Jabo-Gruppen. III./JG 301 moved to Sachau, west of Gardelegen, with the Geschwaderstab and the Doras of II./JG 301 moving to Stendal. These factors resulted in a decision to concentrate the new machines into an enlarged Geschwaderstab as and when they became available and to transfer experienced pilots from III. Gruppe to the Stab.

This took effect from 13 March 1945. On this same day Reschke flew Ta 152 H-1 ‘Black 13′ from Sachau to Stendal, where he was presented with the German Cross in Gold by Kommodore Oberstleutnant Fritz Aufhammer on the occasion of an inspection visit to the Geschwaderstab by the new General der Jagdflieger Generalleutnant Dietrich Peltz. The Wehrmacht’s youngest General flew a twenty minute check flight in ‘Black 13′ and photos of this occasion are well known (even if the aircraft Staffel number is obscured). III Gruppe pilots of note who transferred to the Stab JG 301 were Fw. Willi Reschke, Uffz. Christoph Blum, Ritterkreuzträger Ofw. Heinz Gossow and Staffelkapitän Oblt. Hermann Stahl all of 9. Staffel, along with Sepp Sattler and Josef Keil of 10.

Staffel. Keil was to achieve ‘acedom’ on the type. Former Sturmjäger Walter Loos, who had previously flown alongside Walther Dahl in the Stab JG 300 during the summer of 1944 and had achieved some thirty victories also transferred in. In the last weeks of the war both he and Reschke were awarded the Ritterkreuz. Given the number of Knights Cross holders flying Ta 152s at the end of the war some writers have considered the Geschwaderstab of JG 301 to be something of a crack unit.

The last weeks
The first combat sortie flown by a mixed force of Ta 152 Hs and Fw 190 As of III./JG 301 had taken place on 2 March 1945. That day a powerful 8th Air Force formation of 1,232 bombers screened by 723 fighters was dispatched to Bählen, Magdeburg and Ruhland. Airborne from Sachau behind Verbandsführer (Formation leader) Oberleutnant Stahl, some twelve Ta 152s climbed away southwards and prepared to do battle with the Mustang escort screening the bombers heading for the Bohlen chemical plant near Leuna. The sortie ended in disaster when the Ta 152s were engaged. Willi Reschke has described the events of that day in his history of Jagdgeschwader 301;

‘We reached grid square ‘Heinrich-Caesar’ now flying at an altitude of more than 8,000 meters and closed to formate with a Gruppe of Bf 109s that were wearing yellow and red fuselage bands. We could barely believe our eyes when, moments later, the first tracers split the air around us as Uffz. ‘Bubi’ Blum’s Ta 152 came under attack. The 109s had opened up on us! We could hardly return fire on Kameraden from our own Jagdgeschwader and the sortie was a complete debacle.’

Such had been the secrecy surrounding the introduction of the new fighter and the unfamiliarity of its slender winged silhouette that even JG 301 pilots had mistaken it for enemy aircraft. Although no losses were incurred and the agility and superior performance of the Ta 152 H allowed them to evade all of the “attackers”, the chance to join combat with the P-51s was lost. Meanwhile the 109s of the newly formed IV./JG 301, largely comprising hastily retrained former He 177 pilots from III./KG ‘Hindenburg’ suffered heavily at the hands of the Mustangs west of Magdeburg.

In the event the 2 March 1945 sortie described previously was one of the last to see large numbers of German fighters in the air in defence of the Reich. Thereafter most sorties flown were Jabo or Tiefangriffe on both Eastern and Western Fronts. Although some writers have stated that Ta 152s flew “top-cover” for bases from which Messerschmitt Me 262 jet fighters operated, this seems unlikely. The Ta 152s of the Stabsschwarm did fly airfield protection duties for the Doras of II./JG 301 given that the various Gruppen of JG 301 were housed on different fields.

Incidentally the only recorded encounter with P-51s is the incident noted by Kurt Tank himself, who had a narrow escape while flying one of his Ta 152 Hs towards the end of 1944. He was flying from Langenhagen near Hannover to attend a meeting at the Focke-Wulf plant in Cottbus. His plane carried armament, but no ammunition. Shortly after takeoff, he was jumped by four Mustangs. Tank activated his MW 50 boost, opened the throttle wide, and so the story goes, quickly left the Mustangs far behind in a cloud of blue smoke.

The final victims falling to the guns of the Ta 152 were Russian Yak-9s during the final days of battle around Berlin on April 30, 1945. Approximately 150 Ta 152 H-1 fighters were manufactured between January 1, 1945 and the arrival of Soviet forces at the Cottbus assembly plant. No Jagdgruppen ever completely converted to the type. Most Ta 152 Hs, however, were destroyed on the ground by Allied air attacks while awaiting delivery. A few Ta 152 Hs were allocated to the Mistel program. There is little firm information on numbers produced.

With its scintillating performance, numbers of high performance Allied fighters fell to its guns in the final weeks of the war. Despite the fact that the Ta 152 H was intended to combat high-altitude Allied bombers, very few missions of this type were ultimately ever flown. Despite this no Ta 152s were lost to enemy fire….
Posted by Mitch Williamson at 10:07 PM