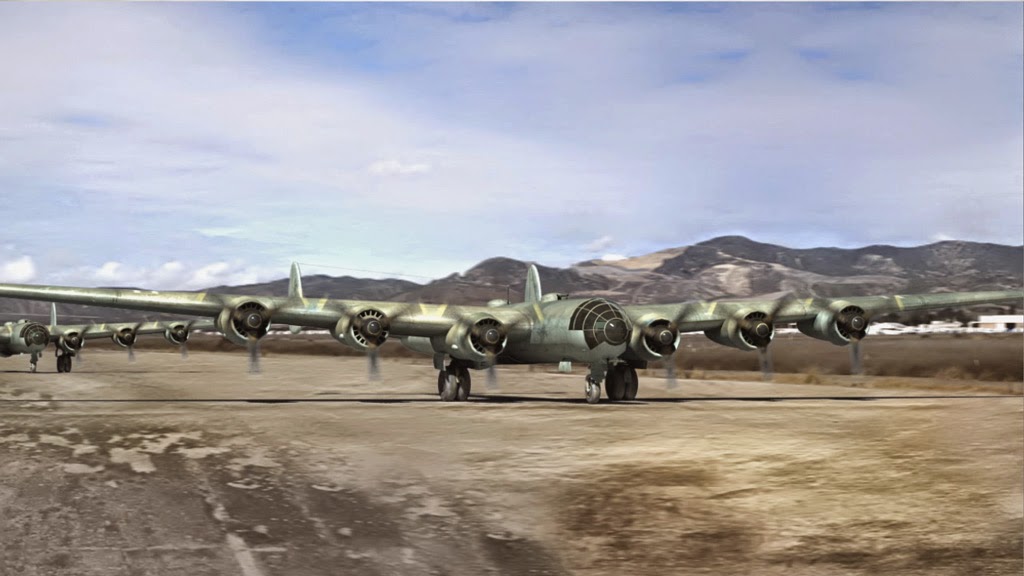 "Amerika" bomber
Amerika Bomber: A group of Me 264 aircraft getting ready to take off


The answer lies with Germany's theory of war in general. Everyone knew that Germany could not sustain a long drawn-out war like WWI. Blitzkrieg, to use a simple term, was developed to achieve quick victories of the kind that were essential to Germany's success. As a result, the sole purpose of the Luftwaffe was to directly support the ground troops in getting that victory through direct intervention on the battlefield.

In general, the twin engine bombers (Do17, Ju88, etc.) were to function in an interdiction role, disrupting supplies and the flow of reinforcements directly behind the battlefield. Strategic bombing, the only use for 4 engined bombers, was a waste of time if the war was only going to last weeks or months. If Germany needed strategic bombing, then she had already lost.

A very decent 4-engine plane was built, the Fw 200 Condor, but used mainly for reconnaissance in support of the navy. It could be used in a bombing role, but again, to what purpose?

The gross statistic for aircraft production is the weight of airframes produced.

So a B-17 is not just 4 times as demanding on production as a fighter, it's more like 7 times.

Additionally the big bombers suck too much gas. One book I read described a raid in 1944 where the US bombing force that raided a German refinery burned more fuel in that single mission than the targeted German refinery could produce in a MONTH.

Finally, if you check the stats for the He-111, Ju-88, and Do-217, the Germans had bombers with lifting capacities fully in line with the B-17 and B-24. This is especially true when you realize that the loads carried by 8th Air Force were restricted to 4,000 - 5,000 lbs. of bombs per plane because management had selected the 500-lb. bomb as the standard weapon and only 10 such bombs fit into an American bomb bay.

The critical difference is mostly the overwhelming production capacity of the US and England. Canada produced more aircraft than Italy. England produced more aircraft than Germany. American production was limited only by the schools to produce aircrew. And with the Luftwaffe already outnumber 3 or 4 to 1 by the English and Americans, you have to include Russian production, which was also larger than Germany's.

As mentioned above, the German's lack of a dedicated 4 engined bomber at the start of the war, was due the philosophical orientation of the German High Command.

At the outset, the German military's goal was to achieve dominance of mainland Europe. To do so, it was decided that rapid strikes by German aircraft over short distances, in support of ground forces, would be the key to victory. Thus, bombers were to perform a tactical, rather than strategic, role in a European war. In examining this plan, German planners decided that it was better (militarily and economically) to field a large force of small bombers performing pin-point attacks (via dive-bombing) than to have a smaller force of heavy bombers dropping huge loads of bombs with a poorer rate of accuracy.

The need for long range heavy bombers was not seriously considered by the Germans until 1940 when Britain did not sue for peace as Hitler had hoped. The campaign over Britain exposed a number of serious flaws in the Luftwaffe's long range capability, which German aircraft designers rushed to rectify.

While it is true that the Fw 200 Condor was a decent 4 engined maritime patrol bomber, it was actually derived from a civilian design and had a limited bomb load. For good or bad, the He 177 Greif was destined to be the Luftwaffe's heavy bomber, but due to demands from the RLM that the plane be capable to perform a multitude of tasks (including medium angled dive bombing attacks), the design was severely compromised from the start. The arrangement of its four engines into pairs driving a pair of large props was complicated and prone to breakdowns with disastrous results. The high incidence of planes lost to engine fires resulted in Luftwaffe crews nicknaming the He 177 "the flying lighter". These problems and other delays did not see the He 177 coming into large scale production until 1943 when the war was already turning against Germany. Although the plane did see considerable service in the east and was employed fitfully against Britain, it had little impact on the course of the war.

Other designs, such as the "Ural" and "Amerika" bomber programs were also harried by design problems, changing RLM demands and interference by Nazi officials, which prevented their complete development.

Posted by Mitch Williamson at 12:13 PM