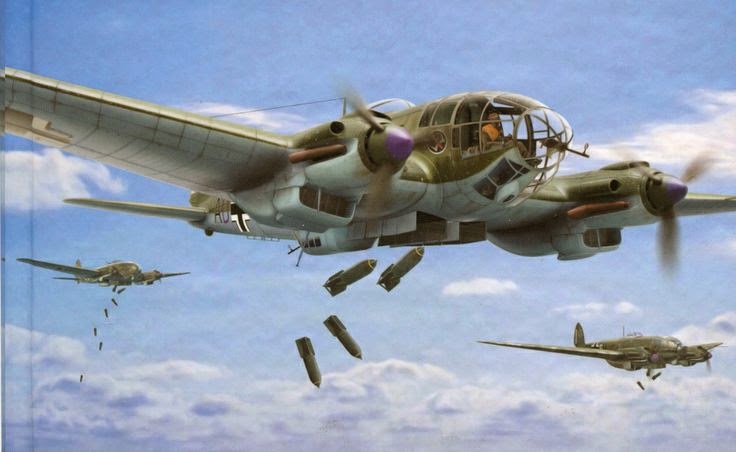 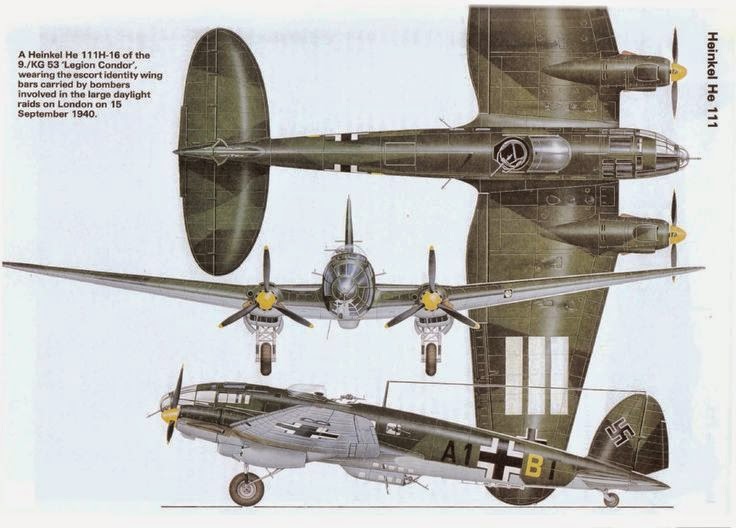 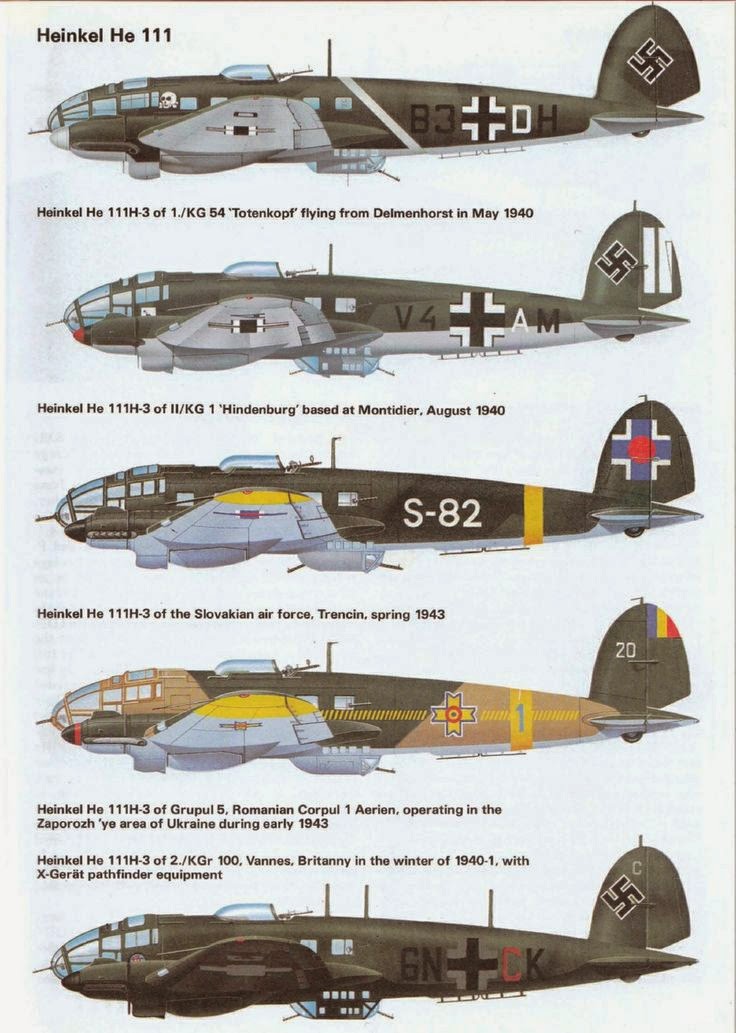 Although the Heinkel He 111 was designed ostensibly as a civil airliner for Lufthansa, its military potential was of a far greater importance. The first prototype of Siegfried and Walter Günter's enlarged, twin-engine development of the remarkable He 70 was fitted with a glazed nose when flown at Rostock-Marienehe on 24 February 1935, in the hands of Flugkapitän Gerhard Nitschke. An all-metal cantilever low-wing monoplane, it was powered by two 660-hp (492-kW) BMW VI 6,0Z engines and was followed by two further prototypes, each with shorter-span wings than those fitted on the first prototype. The third aircraft became the true bomber prototype and the second, which flew on 12 March 1935, was a civil version with a mail compartment in the nose and two passenger cabins, with seats for four and six passengers. After tests at Staaken this prototype eventually joined the Lufthansa fleet, although much of the development work on the civil version was carried out by the fourth prototype, the first to be revealed to the public and demonstrated at Berlin's Tempelhof Airport on 10 January 1936. Lufthansa received six He 111C 10-seat airliners during 1936, and these first entered service on the Berlin - Hannover- Amsterdam, Berlin-Nuremberg-Munich and Berlin-Dortmund- Cologne routes. Lufthansa received subsequently a number of He 111G-3 transports with 880hp (656-kW) BMW 132Dc engines and, later, a further generally similar batch under the alternative designation He 111L.

Development of the military counterpart continued with the manufacture of 10 He 111A-D pre-production aircraft, based on the third prototype, but with a longer nose and armed by three MG 15 machine-guns in nose, dorsal and ventral positions. Two were used for operational trials at Rechlin but poor handling, power deficiencies and inadequate performance resulted in rejection, and all 10 were later sold to China. The solution was the installation of two 1,000-hp (746-kW) Daimler-Benz DB 600A engines, first fitted to the fifth (B-series) prototype which flew in early 1936 as the forerunner of the first production versions built at Marienehe from the autumn of 1936. These comprised the He 111B-1 powered by the 880-hp (656-kW) DB600, followed by the He 111B-2 with 950-hp (708-kW) DB 600CG engines. The improvement in the performance of these aircraft resulted in the Reichsluftfahrtministerium placing such large orders that it was necessary to build a new He 111 construction facility at Oranienburg, near Berlin, this being completed in 1937.

The B-series was followed by the He 111D-1 with improved DB 600Ga engines, but the urgent need to divert DB 600 powerplant for fighter production meant that this version was built in only small numbers. This brought introduction of the 1,000-hp (746-kW) Junkers Jumo 211A-1, installed initially in an He 111D-D airframe to serve as the prototype of the He 111E-D pre-production series. In the initial production He 111E-1 bomber of February 1938 the bombload was increased to 3,7481b (1700 kg), but the He 111E-3 had another increase to 4,409 Ib (2000 kg), and the ensuing He 111E-4 could carry 2,205 lb (1000 kg) of this total on underfuselage racks; final sub-variant of the E-series, the He 111E-5 introduced an additional 183.7 Imp gal (835 litres) of auxiliary fuel carried within the fuselage. The next version into production was the He 111G which first introduced a new wing of simplified construction with straight, instead of curved taper. This was used first in the He 111G-3 civil transport built for Lufthansa, and there was some delay before it was approved by the RLM. Then followed the He 111G-1, basically similar to C-series aircraft but for the addition of the new wing, and the He 111G-4 which was powered by the 900-hp (671-kW) DB 600G engine; four He 111G-5 aircraft supplied to Turkey had Daimler-Benz 600Ga engines. Next came, unsequentially, the similar He 111F-1 powered by Jumo 211A-3 engines of which 24 were supplied to Turkey, and 40 virtually identical aircraft were built for the Luftwaffe in 1938 under the designation He 111F-4.

Developed in parallel were the H-series and P-series, the latter introducing in 1939 a major fuselage redesign which replaced the stepped cockpit by an extensively-glazed cockpit and nose section and, at the same time, moved the nose gun position to starboard to improve the pilot's view. The pre-production He 111P-0 also introduced a revised ventral gondola, with the gunner in a prone position, and was powered by two 1,150-hp (858-kW) DB 601 Aa engines. Relatively few He 111Ps were built before this version was superseded by the H-series, the He 111P-1 which was virtually identical to the pre-production aircraft being delivered first in the autumn of 1939; the He 111P-2 differed only by having changes in radio equipment, and the He 111P-3 was a dual-control trainer. Heavier armour protection and up to six MG 15 machine-guns were introduced in the five-crew He 111P-4 which, in addition to carrying 2,205 Ib (1000 kg) of bombs internally had ETC 500 racks beneath the fuselage for a similar external load; the He 111P-6 had all-internal stowage for 4,409 Ib (2000 kg) of bombs, and later P-series conversions, for use as glider tugs with l,175-hp (876-kW) DB 60lN engines installed, were redesignated He 111P-2/R2.

The major production version, built in a large number of variants, was the H-series, the He 111H-0 and He 111H-1 pre-production/production batches being basically the same as He 111P-2s except for the installation of 1,010-hp (753-kW) Jumo 211A engines. The He 111H-2 which became available in the autumn of 1939 had Jumo 211A-3 engines and carried two additional MG 15 machine-guns, one in the nose and one in the ventral gondola, and the He 111H-3 introduced armour protection and armament comprising a 20-mm MG FF cannon and an MG 15 in the ventral gondola, two MG 15s in the nose, one dorsally mounted, and similar weapons in beam positions. The He 111H-4 introduced Jumo 211D-1 engines and was equipped with two external racks to carry a 3,968-lb (1800 kg) bombload that could include two 1,686-lb (765-kg) differed only by having increased fuel capacity. When He 111H-3 and He 111H-5 aircraft were later fitted with a nose-mounted device to fend off balloon cables they were both redesignated He 111H-8, and subsequent re-conversion for use as glider tugs was made under the designation He 111H-8/R2. Junkers Jumo 211F-1 engines with variable-pitch propellers, and a fixed MG 17 machine-gun mounted in the tail, identified the He 111H-6; and the He 111H-10 was developed and built in small numbers especially for the night bombing offensive against the UK, these being equipped with Kute-Nase balloon cable-cutters in the wing leading edges and additional armour protection. Armament changes and a fully-enclosed dorsal position accommodating an MG 131 machine-gun identified the He 111H-11, in which the nose position carried a 20-mm MG FF cannon and the ventral MG 15 was replaced by a twin-barrel MG 81Z; when the beam guns were later replaced by MG 81Zs these aircraft were redesignated He 111H-11/R1, and changed their designation yet again to become He 111H-11/R2 when adapted to tow Gotha Go 242 gliders. The He 111H-12 and He 111H-15 were both built in small numbers, without the ventral gondola, to serve as missile launchers for Henschel and Blohm und Voss weapons respectively. The first of the pathfinder versions had the designation He 111H-14, and when converted later to serve as a glider tug was redesignated He 111H-14/R2.

Produced in parallel with the F-series, the He 111J-0 and He 111J-1 were intended as torpedo-bombers and powered by 950-hp (708-kW) DB 600CG engines, but the He 111J-1 production aircraft, of which about 8 were built, were equipped as bombers. A single prototype was built of a proposed high-altitude bomber under the designation He 111R, powered by two 1,810hp (1350-kW) DB 603U engines, but no production aircraft resulted. Final, and certainly the most unusual version, was the He 111Z (Zwilling, or twin), designed to tow the Messerschmitt Me 321 Gigant transport glider. It comprised two 111H-6 airframes joined by a new wing centre-section which mounted a fifth Jumo 211F-2 engine. Two prototypes and 10 He 111Z-1 production aircraft were built during the winter of 1941-2.

First deliveries to an operational squadron were made late in 1936, to l./KG 154 at Fassberg, and in February 193730 He 111B-1s were sent to the Legion Condor bomber unit K/88 in Spain, following operational trials in which four of the pre-production He 111B-0s were flown by a flight of VB 88. The He 111 bore the brunt of the Luftwaffe's bombing effort in early World War II: Poland in the autumn of 1939, Norway and Denmark in April 1940, France and the Low Countries in May and against British targets during the Battle of Britain. Large-scale introduction of the Junkers Ju 88, and the He 111's vulnerability to British fighters, resulted in the Heinkel bomber being transferred to night operations and to a variety of specialised roles, as a missile-carrier, torpedo-bomber, pathfinder and glidertug. Transport duties were also undertaken, including operations to supply the beleaguered German army at Stalingrad between November 1942 and February 1943, and by the end of the war He 111s were virtually flown only in the transport role. Production of more than 7,000 German-built aircraft for the Luftwaffe was completed in the autumn of 1944. In addition to those manufactured in Heinkel factories at Marienehe and Oranienburg, He 111s were built by Norddeutsche Dornierwerke in Wismar, by Allgemeine Transportgesellschaft in Leipzig, Arado in Babelsberg and Brandenburg/Havel and at other centres. Some 236 He 111Hs were built by CASA in Spain during and after the war as the CASA 2.111, approximately 130 with Jumo 211F-2 engines and the rest with Rolls Royce Merlin 500-29s; some were converted later for transport and training duties.