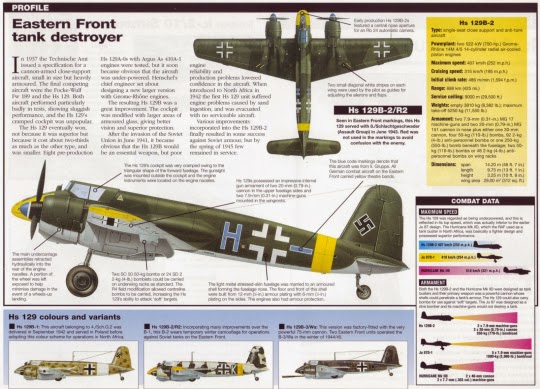 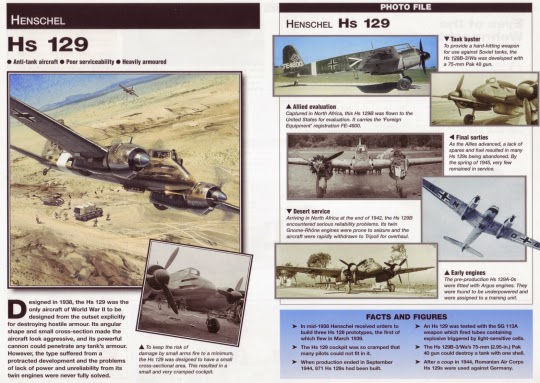 In November of 1942, two units of Hs 129’s were sent to Tunisia to provide air support to Rommel’s Afrika Korps that was in a desperate situation. For the first few days, everything went fine, and the new German plane created a real panic among the British tank units. Unfortunately for the Luftwaffe, the Gnome-Rhône motor was extremely sensible to desert sand, and after three weeks, the whole Geschwader was out of business… Thus ended the short career of the Henschel 129 in North Africa.

Henschel was one of four companies (the others being Focke-Wulf, Gotha and Hamburger Flugzeugbau) to which, in April 1937, the Reichsluftfahrtministerium issued a specification for a twin-engine ground-attack aircraft. It was required to carry at least two 20-mm MG FF cannon and to have extensive armour plating protection for crew and engines. The two designs for which development contracts were awarded on 1 October 1937 were the Focke-Wulf Fw 189C and Henschel Hs 129. The latter was another Friedrich Nicolaus design with a light alloy stressed-skin fuselage of triangular section. It contained a small cockpit with a restricted view, necessitating the removal of some instruments to the inboard sides of the engine cowlings. The windscreen was made of 75-mm (2.95-in) armoured glass and the nose section was manufactured from armour plating. Nose armament comprised two 20-mm MG FF cannon and two 7.92-mm (0.31-in) MG 17 machine-guns. The prototype flew in the spring of 1939, powered by two 465-hp (347-kW) Argus As 410 engines, and two further prototypes were flown competitively against the modified Fw 189 development aircraft for the Fw 189C. Although the Henschel aircraft was considered to be underpowered and sluggish, and to have too small a cockpit, the company was awarded a contract for eight pre-production Hs 129A-o aircraft, and these were issued initially to 5 (Schlacht)./LG 2 in 1940, but transferred to 4./SG 101 at Paris-Orly in 1941, with the exception of two which were converted at Schonefeld to accept Gnome-Rhone 14M 4/5 radial engines. It was with this powerplant that 10 Hs 129B-0 development aircraft were delivered from December 1941; improvements included a revised cockpit canopy and the introduction of electrically actuated trim tabs, and armament comprised two 20mm MG 151/20 cannon and two 7.92-mm (0.31-in) MG 17 machine-guns. The production Hs 192B-1 series went into service first with 4./SchG 1 at Lippstadt in April 1942 and also became operational on the Eastern Front, where the type was to be used most widely, although it served also in North Africa, Italy, and in France after the D-Day landings.

By the end of 1942 the growing capability of Soviet tank battalions made it essential to develop a version of the Hs 129 with greater firepower, leading to the Hs 129B-2 series which was introduced into service in the early part of 1943. They included the Hs 129B-21R1 which carried two 20-mm MG 151/20 cannon and two 13-mm (0.51-in) machine-guns; the generally similar Hs 129B-21R2 introduced an additional 30-mm MK 103 cannon beneath the fuselage; the Hs 129B-21R3 had the two MG 13s deleted but was equipped with a 37mm BK 3,7 gun; and the Hs 129B-21R4 carried a 75-mm (2.95-in) PaK 40 gun in an underfuselage pod. Final production variant was the Hs 129B-3 of which approximately 25 were built and which, developed from the Hs 129B-2/R4, substituted an electra-pneumatically operated 75-mm BK gun for the PaK 40. The lethal capability of the Hs 129B-21R2 was amply demonstrated in the summer of 1943 during Operation ‘Citadel’, the German offensive which was intended to regain for them the initiative on the Eastern Front after the defeat at Stalingrad. During this operation some 37,421 sorties were flown, at the end of which the Luftwaffe claimed the destruction of 1,100 tanks. However accurate these figures, not all of those destroyed could be credited to Hs 129s, but there is little doubt that the 879 of these aircraft that were built (including prototypes) played a significant role on the Eastern Front.