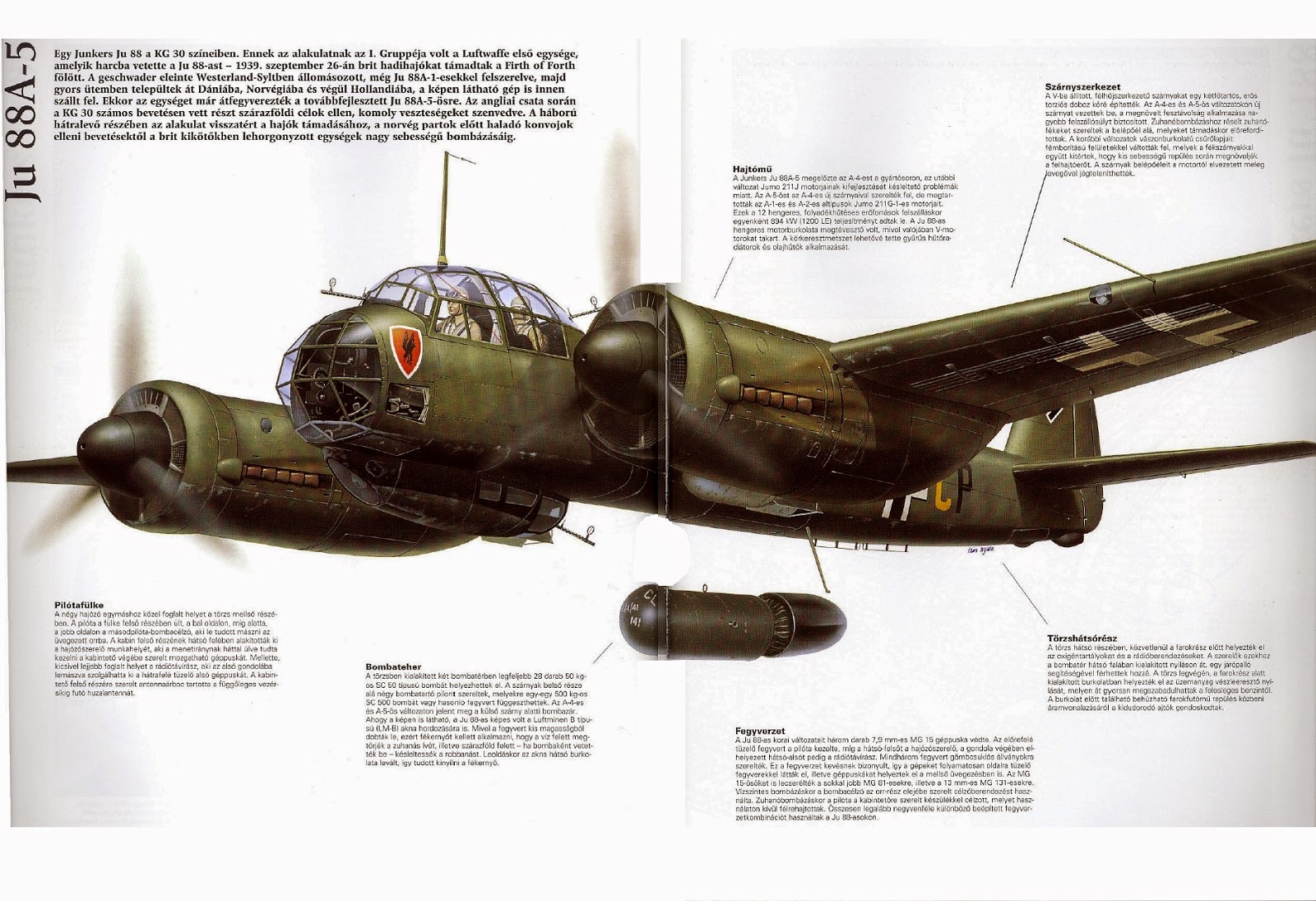 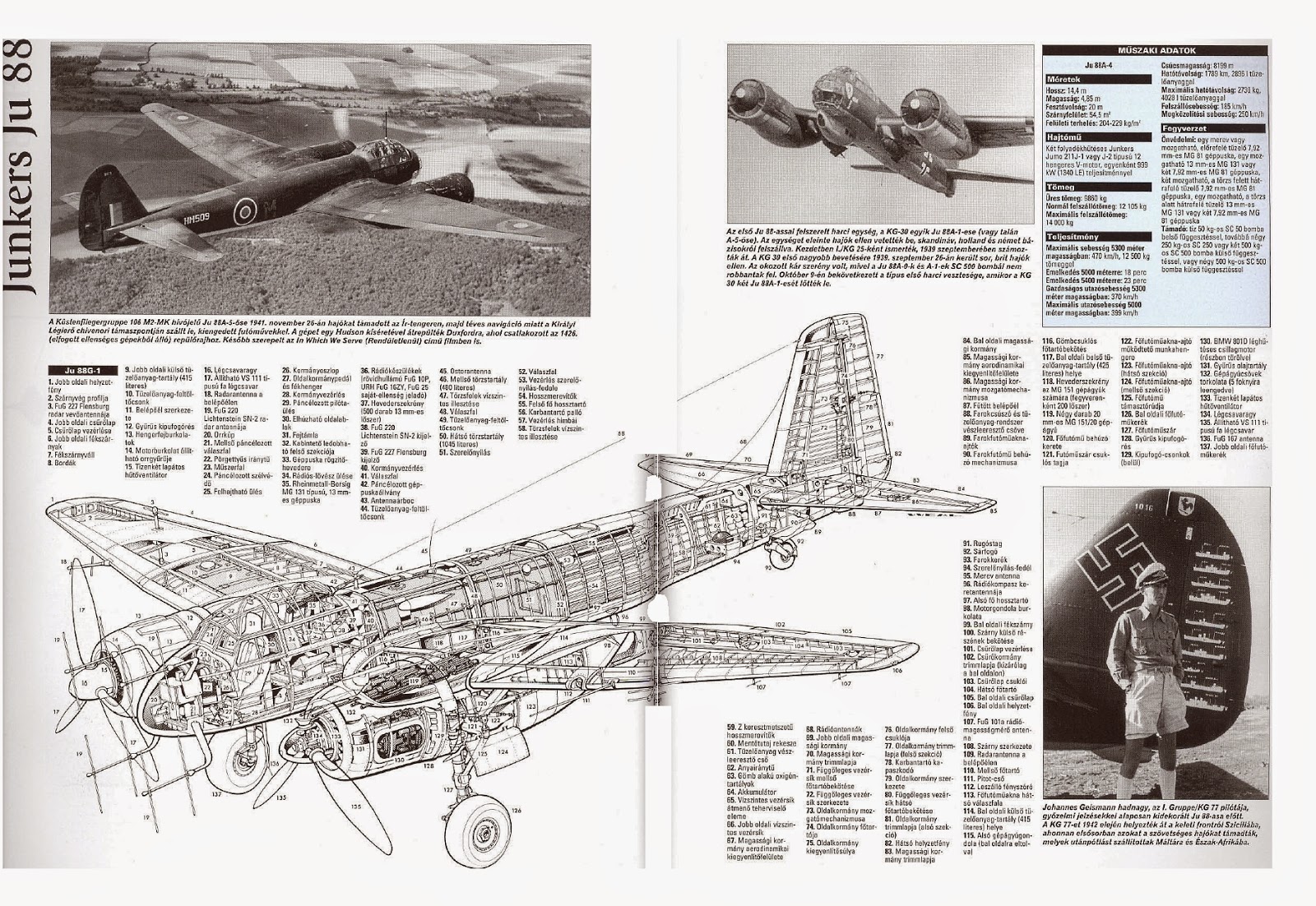 The Junkers Ju 88 was one of the outstanding aircraft of the Second World War, and despite being designed originally as a dedicated fast day bomber ('Schnellbomber'), later became known for its near-legendary versatility. This was a direct result of the aircraft's superb performance characteristics, which in turn resulted from its revolutionary technical innovations. When the original (anti-Nazi) Professor Junkers was replaced, his successor, Heinrich Koppenberg, hired American engineers to supervise his team, laying the foundations for a genuinely modern bomber. Dive brakes were added below each wing during development, as a result of combat experience with other types in Spain and Poland, which showed that dive attacks dramatically improved accuracy, and the fact that dive-bombing was fashionable in Luftwaffe circles.

The prototype Ju 88 flew on 21 December 1936 with two 1,000-hp (746-kW) Daimler-Benz DB 600Ae inline engines with annular radiators, giving them the appearance of radials; the use of these radiators was to continue throughout the development of the aircraft. Further prototypes followed, the third having 1,000-hp (746-kW) Junkers Jumo engines and this, during evaluation, reached 323 mph (520 km/h). The high performance of the Ju 88 encouraged record-breaking flights, and in March 1939 the fifth prototype set a 1,000-km (621-mile) closed-circuit record of 321.25 mph (517 km/h) carrying a 4,409-lb (2000-kg) payload. A total of 10 prototypes was completed and the first of the pre-production batch of Ju 88A-D bombers flew in early 1939. Production aircraft were designated Ju 88A-1 and began to enter service in September 1939.

Early teething troubles were gradually ironed out and sub-variants began to appear, including the Ju 88A-2 with jettisonable rocket packs for assisting takeoff in overload conditions, the Ju 88A-3 dual-control trainer and the Ju 88A4, the first considerably modified development. Designed around the new and more powerful Jumo 211J engine, the Ju 88A-4 had increased span and was strengthened to take greater loads.

Because of problems with the new engine the Ju 88A-4 was overtaken by the Ju 88A-5, which featured the new wing but retained the former engines. During the Battle of Britain many Ju 88A-5s were fitted with balloon-cable fenders and cutters to combat the UK's balloon barrage, and in this form they became Ju 88A-6 aircraft. Some Ju 88A-5s, converted to dual-control trainers, were designated Ju 88A-7.

By the time definitive Ju 88A-4s began to enter service, lessons learned in the Battle of Britain had dictated heavier armament and better protection for the crew. Several different armament layouts were used, but a typical installation was a single 7.92-mm (0.31-in) MG 81 machine-gun on the right side of the nose and operated by the pilot, and two 7.92-mm (0.31in) MG 81s or one 13-mm (0.51-in) MG 131 machine-gun firing forward through the transparent nose panels, operated by the bomb aimer. The same option was available in the ventral gondola beneath the nose, firing aft, while two other MG 81s were in the rear of the cockpit canopy. Some 4,409 lb (2000 kg) of the bombload was carried beneath the wings, both inboard and outboard of the engines, while the internal bomb bay held another 1,102 lb (500 kg).

By the end of 1942 the Luftwaffe had taken delivery of more than 8,000 Ju 88's. While the Ju 88A was in quantity production, Junkers was developing the Ju 88B, the prototype of which flew in 1940 with two 1,600-hp (1193-kW) BMW 80lMA radial engines. Main change in appearance was to the forward fuselage, which was enlarged and extensively glazed, and there was a marginal increase in performance over the Ju 88A, though this was not sufficient to warrant a change in the production lines, and only 10 pre-production aircraft were built.

For the Battle of France, the Ju 88 equipped one three Grüppe Geschwader, and four Grüppen within other Geschwaders. By Adlertag, the Luftwaffe included 13 Grüppen of Ju 88s, and these were able to play a decisive part in the Battle of Britain, highlights including a mass raid on Portsmouth by 63 Ju 88s on 12 August. The Ju 88 was far and away the best of the Luftwaffe bombers operating during the Battle of Britain, and suffered a correspondingly lower attrition rate than either the He 111 and Do 17. The aircraft was vulnerable to single seat fighters, of course, but there were numerous instances documented where Ju 88s were able to escape from an attack by diving away from their pursuers at very high speed.

The original Ju 88A-1 which formed the backbone of the Kampfgeschwaderen during the Battle of Britain were prone to a number of problems, some relatively minor, others much more serious. These led to the imposition of a number of fairly restrictive limitations on speed and manoeuvring. These limitations were not applied to the later Ju 88A-4, though problems with this version's 1350 hp Jumo 211J engines meant that it did not reach the frontline until after the Battle, and nor did its specialist reconnaissance equivalent, the Ju 88D-1. Fortunately, an interim 'improved Ju 88' was available to the Luftwaffe in time for Adlertag. This was the Ju 88A-5 (with the Ju 88D-2 as the recce equivalent), which featured a longer-span, strengthened wing with inset metal-skinned ailerons, and a much-increased bombload. For the first time, the Luftwaffe had a Ju 88 not choked by artificial limitations, and the Ju 88A-5 performed with great distinction. The final variant to participate in the Battle was the initial reconnaissance Ju 88D-0, a handful of which flew from Norway.