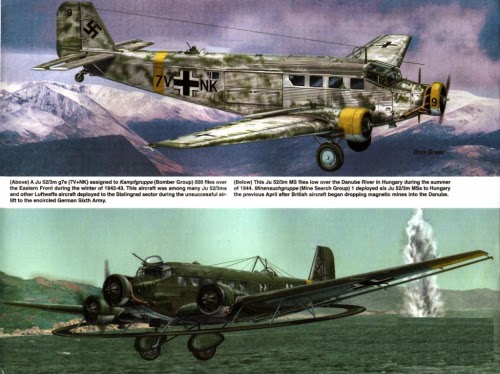 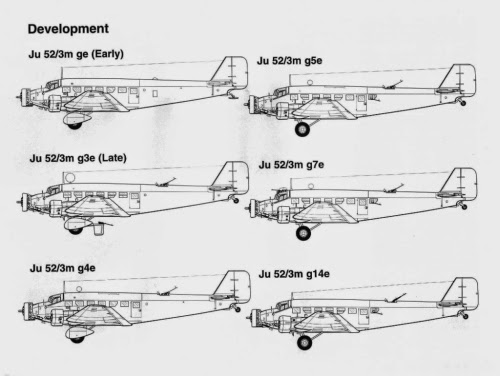 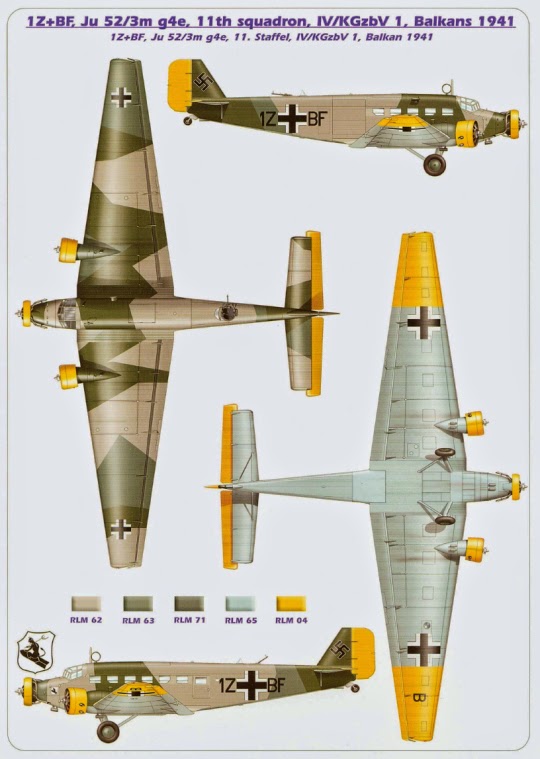 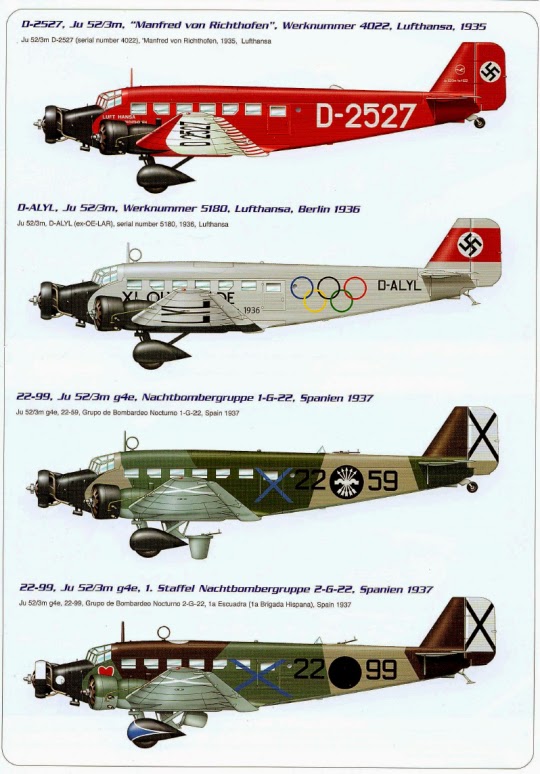 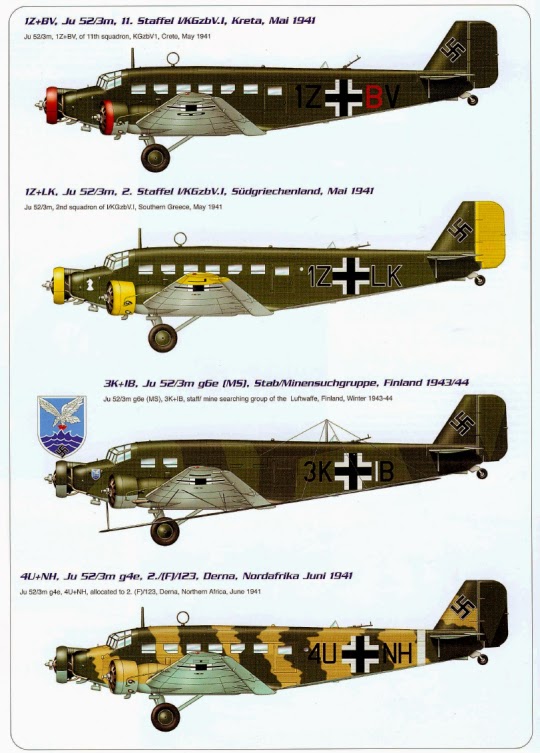 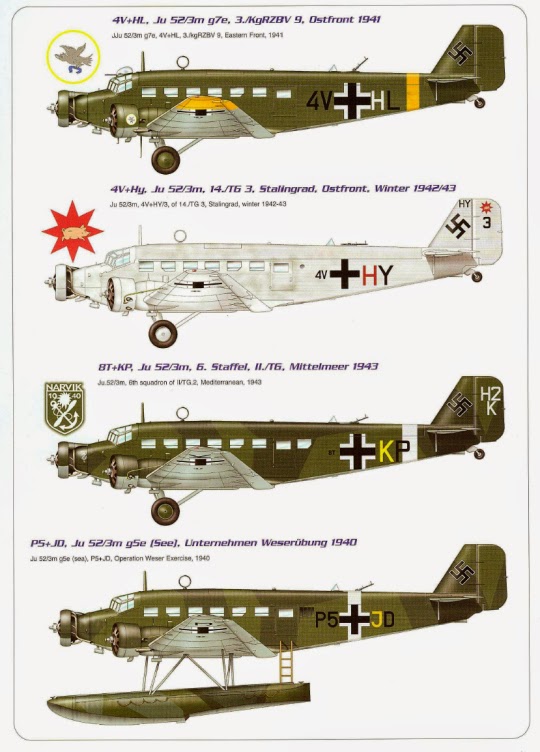 The Ju 52 trimotor, like the USAF C-47, was first built in the 1930s and remained in service for more than a quarter century. This transport made its maiden flight in April 1931, and three years later, a heavy bomber version appeared. The latter aircraft formed the nucleus of the Luftwaffe’s infant bomber force in the mid-1930s, and it was used during the Spanish Civil War.

The Ju 52 was obsolete as a bomber by 1939, but because of its durability, simplicity of design and handling characteristics, it continued to serve throughout World War II as a versatile workhorse of the German transport fleet. For a period, Adolph Hitler used a Ju 52 as his private transport. Ju 52s delivered the attacking forces and their supplies during the German invasion of Norway, Denmark, France and the Low Countries in 1940. Almost 500 Ju 52s participated in the historic airborne assault on the island of Crete in May 1941, and Junkers later supplied Rommel’s armored forces in North Africa.

Approximately 30 different countries have flown Ju 52s. The aircraft on display was donated to the museum by the Spanish government in 1971. Note: This particular aircraft is a CASA 352L.

Ju 52 and the SST Concorde
I have a rather amusing incident to share re the restored Ju-52 of Lufthansa [1]. A number of years ago (back in 1990 plus or minus one or two years), the now restored Ju-52 made a goodwill tour to London’s Heathrow airport. When it was departure time, the Ju-52 found itself on the taxiway behind a British Airways Concord SST. Much to the amusement of the Ju-52 crew, the captain of the Concord requested permission to switch departure orders with the Ju-52. The captain of the SST did not want to miss seeing the Ju-52 take off – he obtained permission from the air traffic controller to let the Ju-52 pass him and take off first. It must have indeed been a wonderful sight to see.

Civil Use
The Junkers Company was an early constructor of aero-engines as well as airframes. In 1923 Junkers Motorenbau was founded, and in July 1936 the airframe and engine companies merged as Junkers Flugzeug-und-Motorenwerke.

Apart from designing and building orthodox gasoline engines, Junkers embarked on a long development programme of what were known as Schweral (heavy oil) or Rohal (crude oil) engines in other words diesels.

Jumo 4-powered Junkers F24s were put into service on Lufthansa’s Berlin-Amsterdam route and nine of the airline’s F24s were fitted with Jumos.

Most of the many thousands of Ju 52/3ms were powered by air-cooled radial gasoline engines but two were fitted with 550-hp Jumo 205Cs. Changes to the airframe made them Ju 52/3mhs and, the Junkers suffix for the Jumo being the letter 0, the correct designation became Tu 52/3mho.

One of these aircraft was the landplane Emil Schaefer. Apart from its Jumo engines and two blade propellers it was a standard aircraft. Then at the 1934 Paris Air Show a Jumo-powered Ju 52 twin-float seaplane was exhibited. After the show it was converted to a landplane and entered Lufthansa service as W Hoehndorf. As far as is known these aircraft were identical and it is presumed that they were used to get operational experience of diesel engines and compare their performance with BMW-powered Ju 52/3ms.

There is evidence to suggest that Emil Schaefer was re-engined with BMW 132 radial engines and that the Jumo 205Cs in W Hoehndorf were replaced by Jumo 206As, since these engines were listed as in the aircraft in 1940 and 1941.

The Jumo diesels, although having lower fuel consumption, were not an unqualified success and were noisy, heavy and smoky.

As history bears out, the Ford Tri-Motor AT and the Junkers tri-motor were on parallel courses. Hugo Junkers was a pioneer in the development of metal-skinned aircraft for Germany. His American analog was William B. Stout. Stout, with Henry and Edsel Ford as investors, was set to build his own metal-skinned planes. Still, Stout cast his eye overseas for ideas on how to improve his own designs. There is evidence that Stout incorporated Junkers’s innovations into his own designs. Ford eventually bought the company from Stout in 1925. Before Stout could adequately demonstrate a working prototype worthy of production, a fire destroyed part of the factory, and the prototype tri-motors. Afterwards, a Ford team (Stout eventually fell out of the picture) produced the Ford Tri-Motor 4-AT in 1926 (199 were built). The 5-AT was produced in much larger numbers after 1928. But this plane was not the same one that Junkers produced.

Hugo Junkers also began experimenting with the production of metal planes during the 1920’s. The first Ju 52 that Junkers rolled out in 1930 was, in fact, a single-engine model. By 1932, the Ju 52/3m version had the familiar tri-motor configuration.

Ford Motor Company, was the majority shareholder of a production plant in Cologne, Germany. Several years before the U.S. involvement in the war, and in hopes to appease the Nazis, Ford replaced the entire board of directors of that company with Germans, place Ford’s German operations in the care of a pro-Nazi caretaker, and changed the name to Ford Werke, AG. When I mentioned “nationalized”, earlier, this notion was mistaken–Ford Werke was never consolidated into the Hermann Goering Werke of nationalized German military industries. Instead, Ford Werke maintained its status as an independent company although Ford, Inc. contends that it lost control of Ford Werke in 1941 after the U.S. declared war. Nevertheless, under National Socialism, the state dictated the product lines that a privately-owned enterprise could sell; at Ford Werke, this product was: TRUCKS for the Wehrmacht (only German-made parts were used in their assembly, even prior to the War).

I did not find a connection between Ford Werke or any of Ford’s other subsidiaries in Nazi-occupied countries as far as aircraft parts production is concerned–but this was not an exhaustive search, so please weigh the evidence accordingly. Did Ford Inc. sell any tri-motor aircraft to the Germans in the 1930’s prior to, or even after the rise of totalitarianism? That I do not know, although Ford did supply tri-motor aircraft to each of the U.S. Services.

Besides the obvious similarity of having three powerplants and being monoplanes, the Ford Tri-Motor 4/5-AT has an overhead wing design, and Junkers Ju 52 has its wing integrated into the lower part of the fuselage. Interestingly, both used a Pratt & Whitney radial engine at some time in their development (5-AT, P&W Wasp; Ju 52/3mce, P&W Hornet). Later, a BMW radial replaced the P&W engines in the Ju 52.