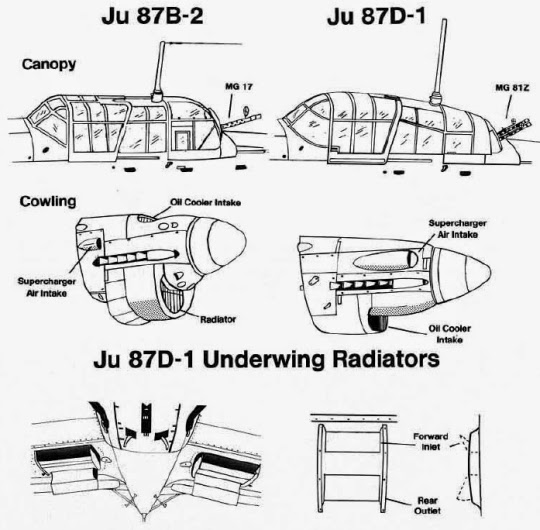 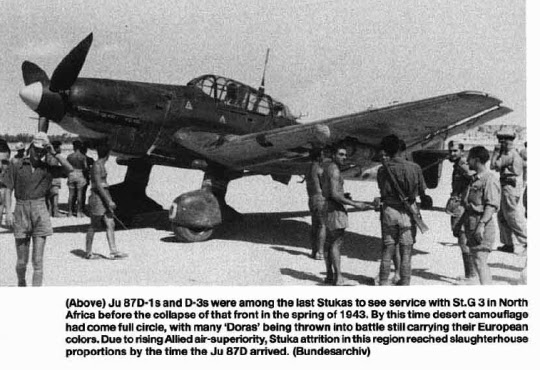 The R-variant was basically a Ju 87B version with facilities for fitting external wing-drop fuel tanks enabling a range of 1,000 km (620 miles). The improved D-version had a slightly more aerodynamic fuselage with a refined engine cowling, and redesigned cockpit line; it could carry an increased bomb load, had a greater range, and could mount various weapons, notably two underwing WB 81 containers each housing six MG 81 guns.

Although the Stukas had suffered mightily at the hands of the RAF, the Luftwaffe had no immediate replacement available and development continued, the next production model being the Ju 87D-1 with the new 1,410-hp (1051-kW) Jumo 211J-1 engine. Considerable changes were made in the aircraft’s appearance and armour was increased, probably the most popular improvement! Production of this version began in 1941 and deliveries during that year totalled 476, with 917 in 1942. The type was deployed extensively in the Middle East and on the Eastern Front, and in the former area was even used as a glider tug under the designation Ju 87D-2. The Ju 87D-3 had extra armour protection for the ground-attack role, and an odd experimental version of the Ju 87D-3 had a pod above each wing, both capable of carrying two persons and intended to be used to drop agents behind enemy lines. The pods were designed to be released in a shallow dive and to descend by parachute, but the point of this is obscure and it is not known if flight trials and release ever took place. The designation Ju 87D-4 applied to a torpedo· bomber version. The Ju 87D-5 had the outer wing panels extended to give a span of 49 ft 2 1/2 in (15.00 m), the increase being necessary to cope with the heavier loads that were being carried. Dive brakes were omitted as the variant was intended only for ground attack.

The Ju 87s in use on the Eastern Front were, by 1943, being severely mauled by the Red Air Force during daytime operations. A night assault version. also without dive brakes, was developed as the Ju 87D-7 with flame-damped exhausts, two wing-mounted 20mm MG 151/20 cannon and night-flying equipment. The Ju 87D-8 final production version was a similar but simplified aircraft.

While the bulk of the Stukagruppen now massed for the forthcoming invasion of Russia, I/St.G 1, II/St.G 2 and I/St.G 3 remained in the Mediterranean theatre to support Rommel in North Africa. With little in the way of Allied defences to oppose them, the Stukas were able to operate freely during the desert offensives and counter-offensives. In December 1941, Luftflotte 2 arrived in the area with the Erganzungs (training and replacement) Gruppe of St.G 1; and in March 1942 I/St.G 1 and II/St.G 2 were redesignated II and III/St.G 3 respectively to bring the Geschwader up to full strength. On 21 March III Gruppe moved to Biscari-San Pietro in Sicily, where it converted to the Ju87D-1; during renewed attempts to neutralise Malta, when crews often made three sorties per day, formations of about twenty aircraft set out with an entire Gruppe of fighters as escort. Eventually, demands for air support from North Africa reduced the strength of units operating against Malta and although small raids by single sections of dive bombers continued, they lacked adequate defensive covering fire and became easy prey for the defending fighters.

At the end of May 1942, III/St.G 3 too was recalled to North Africa and in June and July, when operations in support of the Afrika Korps’ advance to El Alamein called for intense efforts, they again flew as many as three sorties a day, attacking troops, transport and tank concentrations, artillery positions, airfields, stores and ammunition dumps. In early June the entire Geschwader made repeated attacks on the fortress of Bir Hacheim and, up until the time of its capture, many raids were directed against shipping and installations at Tobruk Harbour; but the long advance had exhausted German air and ground forces alike, and Rommel was halted at El Alamein. The now greatly reinforced Desert Air Force inflicted heavy losses, and in spite of close escort flown by the more experienced Luftwaffe fighter-pilots the Allied fighters invariably broke through the defensive screen. As in the Battle of Britain, the Stukas were too slow for the escort. One particularly notable success for the Desert Air Force occurred during the evening of 3 July when a formation of fifteen Stukas, heavily escorted by fighters, was intercepted over El Alamein. In the ensuing air battle the Allied fighters claimed all but two of the dive-bombers destroyed, some being chased back as far as their own airfield before being shot down. Final attacks against El Alamein extended the Luftwaffe to its limit with the result that sorties were considerably reduced due to natural attrition and combat losses.
Posted by Mitch Williamson at 5:45 PM