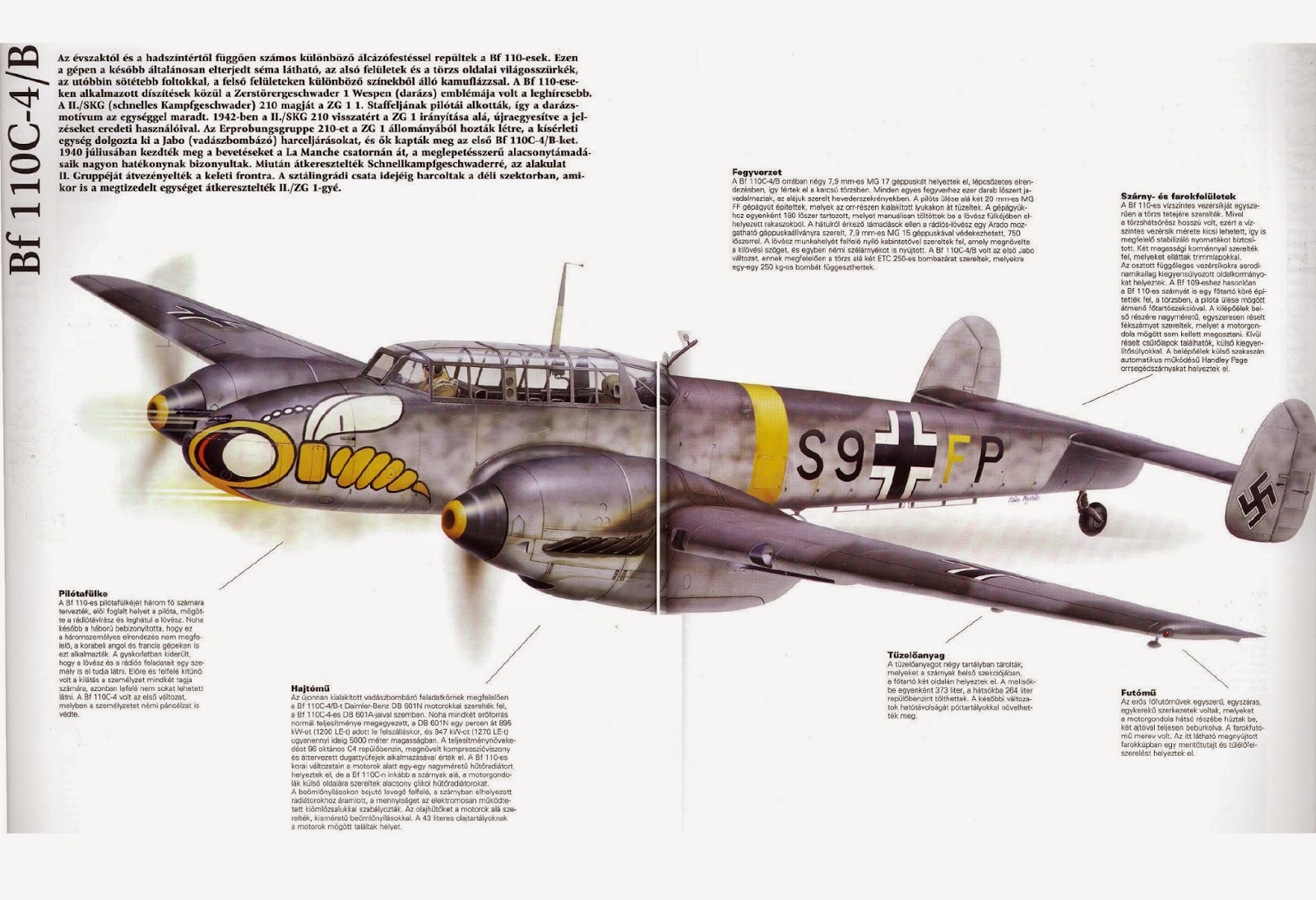 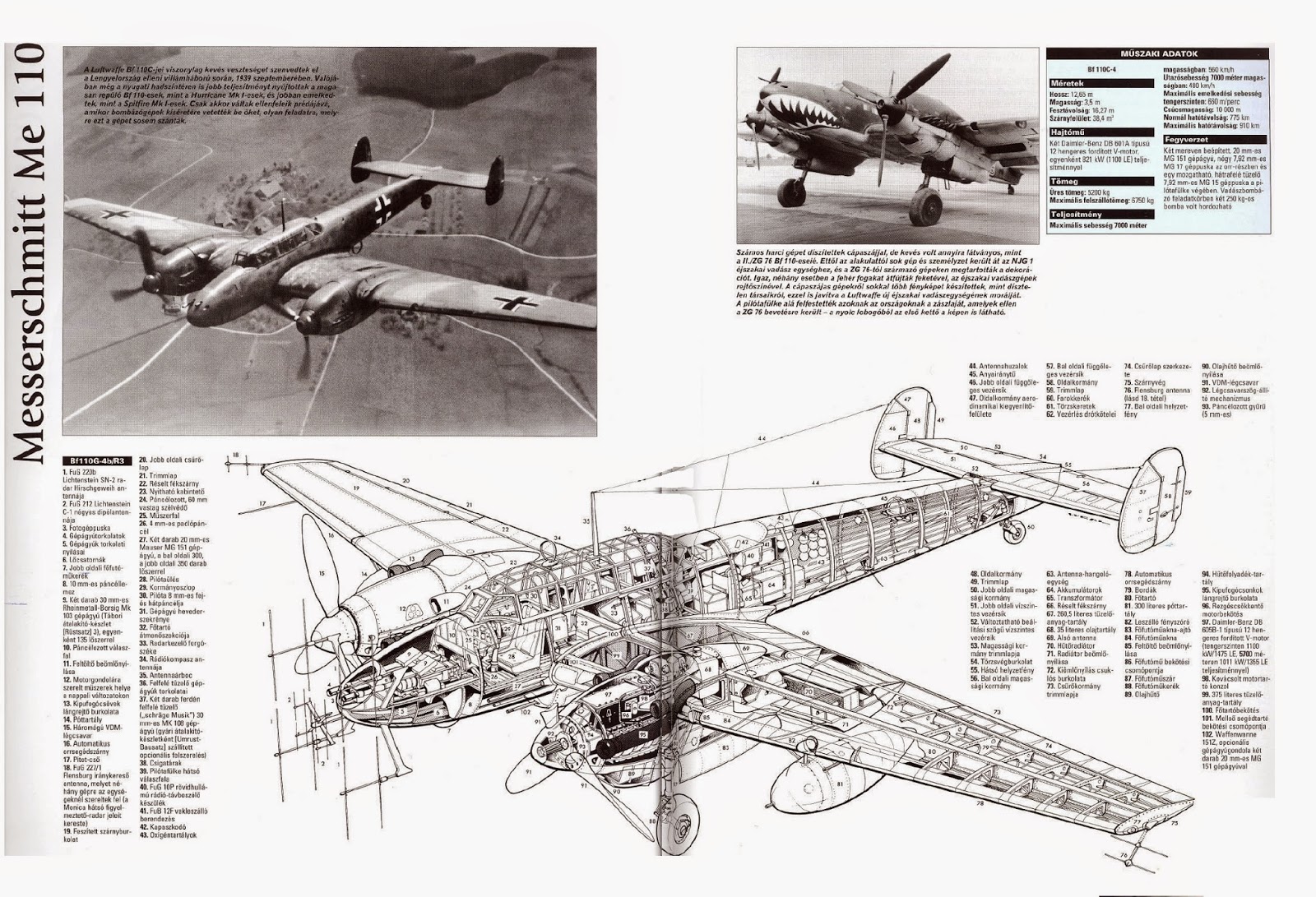 Designed in 1934 by Willy Messerschmitt’s Bayerische Flugzeugwerke (Bf), the first Bf 110 V1 prototype flew in May 1936.

The combat destroyer competition which began in 1934, the Bf 110 ended up as the sole contender, despite - or because of - the fact that it was far removed from the specification. This cantilever all- metal low- wing monoplane was similar in many structural respects to the Bf 109. The divided wing was single- sparred, with very similar attachments at the fuselage. The engine forces were transferred to the spar through an intermediate structure, to which the single- leg backwards- retracting undercarriage was also attached. The wing was more highly tapered than that of the Bf 109, and carried automatic slats and slotted ailerons over the outboard 40 per cent of the semi- span. The slotted landing flaps extended from the ailerons to the fuselage. The vertical stabiliser took the form of twin fins, intended to provide an unobstructed field for the gunner. The tail- plane was adjustable in flight, also as on the Bf 109. Fuel was accommodated in the inboard wing section between fuselage and engine nacelles in two tanks on each side, fore and aft of the spar. The initial version, fitted with Jumo 210 engines, was equipped with 'belly radiators' slung below the engines, as on the Jumo-powered Bf 109, and, incidentally, most other aircraft of the period. The fuselage, although narrow, provided adequate space for the pilot, seated directly in front of the front spar, and for the radio opera- tor/machine- gunner, whose task was to defend the aircraft against attacks from the rear. The original specification called for a third crew member, and he could be accommodated between them. This was a configuration which was also adopted for British and French aircraft at the time. The view forward and above was extremely good for both crew members, whereas little could be seen downward with this over- all layout. Whether it had been planned originally to install a heavier forward armament than the four 7.9 mm MG 17 machine- guns, which were only fitted to the third test machine, has proved impossible to discover; the 1934 technical- tactical requirement called for two 20 mm cannon (and one twin machine- gun for defence).

In terms of speed the Jumo 210- powered Bf 110 exceeded handsomely the requirements of the armament aircraft III, for which it had been built in the first place, but its maximum altitude of 8,000 m was substantially lower than the requirement of 10,000 m. The only recourse here was more powerful engines. The V3 had been planned for the DB 600 engine, and this engine was also required for the Bf 109 in the interests of increased performance, but the unit turned out to have three faults which rendered it unsuitable for the production 109 and 110.

The faults were:
1. As a carburettor engine it did not appear to be suitable as the power plant for a modern fighter aircraft.
2. It had too many teething troubles, particularly in the higher power range.
3. The production figures for the immediate future were far too low to support a second programme (let alone a third) in addition to He 111 bomber production.

In the summer of 1939 the aircraft built with the Jumo 210 were withdrawn from combat formation and transferred for training purposes. The Chief of Training Authority noted on 7 July the 'introduction of the Bf 110B- 1 aircraft type.' The installation of more powerful i. e. heavier engines and correspondingly heavier propellers forward of the centre of gravity meant that the new larger radiators had to be shifted into the rear part of the wing, aft of the centre of gravity, just outboard of the engine nacelles. There may also have been aerodynamic reasons for this. The new layout necessitated a rather complex mechanism for operating the flaps which controlled the airflow through the radiator in parallel with the wing flap setting. Otherwise the structure remained virtually unaltered, apart from necessary strengthening.


An aircraft of very mixed fortune, the wartime-production Bf 110C joined the German air force in early 1939. The strategic fighter was intended to perform as a heavily armed escort fighter to accompany bombers deep into enemy territory, blasting a path through all opposition, and raiding deep into enemy heartland. Seen as offering a multi-role capability, and complementing their primary force of single-engined light fighters, the heavily armed twin-engined Bf 110 raised considerable enthusiasm and high expectations. Special Zerstörer (destroyer) wings were formed, and regarded so highly that most of the best fighter pilots were posted to them. The two-seat, twin-engined monoplane Bf 110 had a span of 16.25 m (53 ft 5 in), a length of 12.1 m (39 ft 8.5 in), a height of 3.5 m (11 ft 6 in) and an empty weight of 4,500 kg (9,920 lbs). Powered by two 1,100-hp Daimler-Benz DB 610A engines, it had a speed of 562 km/h (349 mph), and a range of 850 km (528 miles) but this could be significantly increased to 700 miles by jettisoning underwing fuel tanks. Armament was formidable, including two forward- firing 20-mm Oerlikon MGFF cannons (placed in ventral position), four forward-firing Rheinmetall 7.92-mm MG 17 machine guns (fixed in the nose), and one 7.92-mm MG 15 manually aimed in rear cockpit. Four 250-kg (551-lb) bombs could be carried in underwing racks.

Right before the war a photograph appeared in the German press, showing the new Messerschmitt bomber Me 210 Jaguar; this was an elaborate hoax (in fact a Bf 110 with a glazed nose photographically superimposed) to fool the British and the French. Too late to be tested in the Spanish Civil War, the Messerschmitt Bf 110 met its requirements and, despite unimpressive maneuverability, performed extremely well in the close-support role in the Polish, Norwegian, Dutch and French campaigns. The Battle of Britain, however, proved a turning point in the Messerschmitt Bf 110 heavy fighter’s career. Lacking a powerful rear defensive armament, agility and acceleration ability to cope with the opposing fast, agile and modern single-engine British fighters, it proved itself almost as vulnerable to Spitfires and Hurricanes as were the bombers it was supposed to protect. Suffering heavy losses, the result was that the escort Bf 110s themselves had to be escorted by Bf 109 fighters. As a long-range fighter/light bomber, the Bf 110 was a flop. Despite this setback and its ultimate failure in its originally intended role, the Messerschmitt Bf 110s continued to serve in all theaters.

Improved D and E versions with many improved sub-types performed in various roles in 1941 and 1942, in less dangerous skies in the Balkans, North Africa and Russia, including ground and shipping attacks, light bomber runs, glider tug work, and long-range reconnaissance. By 1942, production was scheduled to end, and the aging Bf 110 was supposed to be replaced by the new Messerschmitt Me 210. The failure of the latter led to the Bf 110 being reinstated (G version) and modified well beyond its original design. Though outdated in 1943, the Bf 110 G was built in larger numbers than all other versions combined. The type found its true niche in the defensive role in which its heavy armament, long range, and ability to carry airborne radar made the Bf 110 useful again. Away from opposition fighters, its destroyer capabilities could work once more. Mainly used as night fighter, the improved G version was powered by two 1,475-hp Daimler-Benz DB B engines, and fitted with flame dampers on the exhausts. Mounting Lichtenstein radar, heavy MG 151 oblique-firing Schräge Musik guns (and eventually 21-cm rocket tubes), the Bf 110 achieved remarkable successes as much as a night fight as day interceptor. That was to change when the Bf 110’s nemesis, long-range escort single-engine fighters (P-47 or P 51 for example), returned to the scene. By March 1944, due to heavy losses, the Bf 110 was forced to withdraw from the daylight air war above Germany. A final version (Bf 110 H ground attacker) was produced in February 1945, after a total of 6,050 of all types had been manufactured.
Posted by Mitch Williamson at 5:29 AM