Scourge of the Atlantic 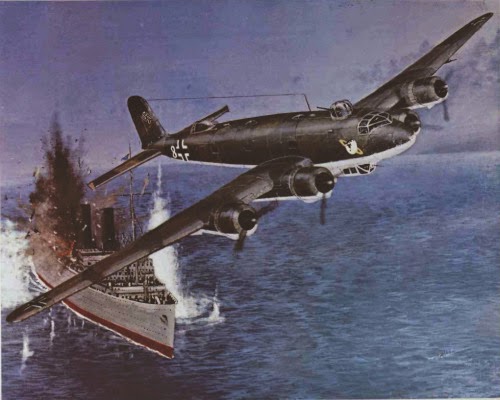 The Focke-Wulf Fw 200 Condor, a long-range reconnaissance bomber famously called the “scourge of the Atlantic” by Winston Churchill for its deadly efficiency between 1940 and 1942.

Focke-Wulf FW 200 Condor was designed as an airliner, this four-engined aircraft first flew on 27 July 1937. Structurally strengthened for military use, and with defensive armament added, it had but two advantages, range and endurance, to fit it for the anti-shipping mission. Flying with KG 40, it became the scourge of the Atlantic from 1940. Offensively it carried four 250kg bombs on underwing racks, although the carriage of two 1,000kg mines made it too unwieldy to be viable. A few aircraft were modified to carry a pair of Hs 293 missiles, but this marriage was not a success. On occasion, Condors encountered RAF four-engined aircraft, Liberators and Sunderlands, and a battle of the heavyweights ensued, usually to the detriment of the Condor. It was produced only in small numbers, and structural weakness was a major failing. Maximum speed 360kph; cruising speed 335kph; service ceiling 6,000m; range 3,560km; endurance up to 17 hours.

It was on 5 August 1940, that the Battle of the Atlantic took a new turn. On this day, the first examples of the Luftwaffe’s Focke-Wulf Fw 200 Condor commenced systematic anti-shipping operations from the recently-captured Bordeaux-Merignac airfield in western France.

Patrolling in wide sweeps out over the Bay of Biscay and into the Atlantic west of Ireland, the Fw 200s were capable of continuing around the north of Britain to land in Norway – flight-paths that encompassed many of the Allied convoy routes. Operated by Kampfgeschwader 40 (KG 40), which was formed in June 1940, the Condors soon began to make their presence felt.

In the first two months of operations, the KG 40 crews claimed the sinking of some 90,000 tons of Allied shipping. By February 1941, this had reached around 363,000 tons. These successes were achieved despite the Fw 200 being fitted with a rather crude bombsight and the attacks often being made at extremely low altitude in order to bracket a target. The threat from these anti-shipping patrols was so real that Churchill once wrote: “To the U-boat scourge was now added air attack far out in the oceans by long range aircraft. Of these, the Focke-Wulf 200, known as the Condor, was the most formidable.”

However, by mid-1941, the writing was on the wall for the Condor. In August the first Fw 200 was shot down by a Hawker Hurricane launched from a CAM-ship (Catapult Aircraft Merchantman). Then, in the following weeks there came a series of defining actions.

Between September and November 1941, the British escort carrier HMS Audacity, carrying Grumman Martlet II fighters, accompanied a number of convoys between Gibraltar and home ports. In a number of engagements, her fighters shot down at least three Fw 200s and damaged a number of others. As the Battle of the Atlantic continued to develop, so did the Condor losses.

A number of damaged Fw 200s landed in Spain during the war. In the beginning they were often repaired and returned to their bases in France. As the course of the war altered following Operation Torch (the Allied invasion of Africa), the Spanish government interned four aircraft that subsequently arrived. Although their crews were still allowed to return to Germany, their aircraft were sold by the Luftwaffe to Spain. One of the three flyable Fw 200s was then operated in the Spanish Air Force, the others used for spares.

One aircraft that would not fly again was a Condor that was brought down on 13 August 1943. A Fw 200 C-5 of 9/KG 40, it had tangled with a Consolidated B-24 Liberator of the 1st Squadron of the 480th Anti- Submarine Group over the Bay of Biscay. One of the Luftwaffe crew, Unteroffizier Werner Zerrahn, recalled what happened: “We had been briefed to fly an armed reconnaissance sortie over the Bay of Biscay as far as the Azores. Flights like this had a duration of about ten to twelve hours … During our approach, we were able to make out a convoy and reported its position to Bordeaux by sending a coded radio message. Only a few minutes later, a B-24 Liberator appeared which caused a lot of trouble.

“The enemy’s speed was considerably higher than ours and we received many hits. Our gunner, Obergefreiter Heinz Wagner, was wounded and holes in the fuel tanks caused the loss of quite an amount of fuel. Fortunately, we reached a layer of cloud and with the last drop of fuel we were able to make a good belly-landing in a harvested field of maize near La Coruna in Spain.”
This was the third of five combats between the American 480th Anti-Submarine Group and KG 40. In the running battle on 13 August, at altitudes ranging between 2,000 feet and sea level, the gunners on the Liberator, piloted by Lieutenant Fred W. McKinnon, expended no less than 1,790 rounds of .50-calibre ammunition to bring down the Condor flown by Oberleutnant Günther Seide. With its No. 3 engine seen to be smoking, the Fw 200 force-landed at Camarinas in Spain. After spending a few days in La Coruna and Valladolid, the German crew travelled to Madrid; two weeks later they were back at Bordeaux.
Posted by Mitch Williamson at 10:04 PM