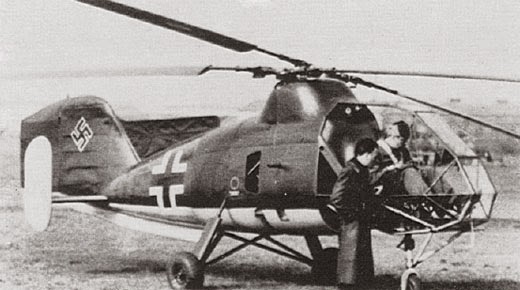 Fl 282 V3, horizontal stabilizers with end plates, glazing in front of pilot only. 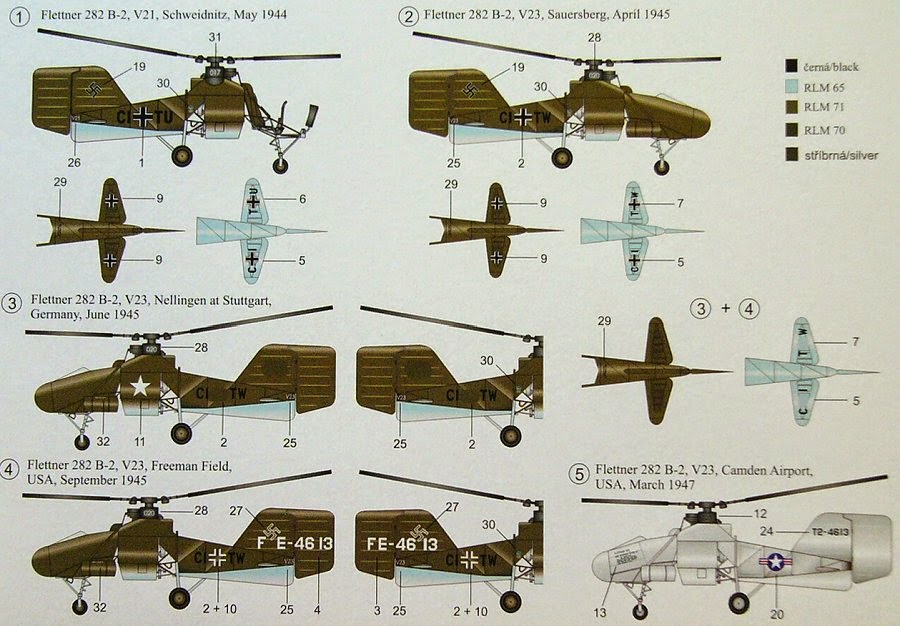 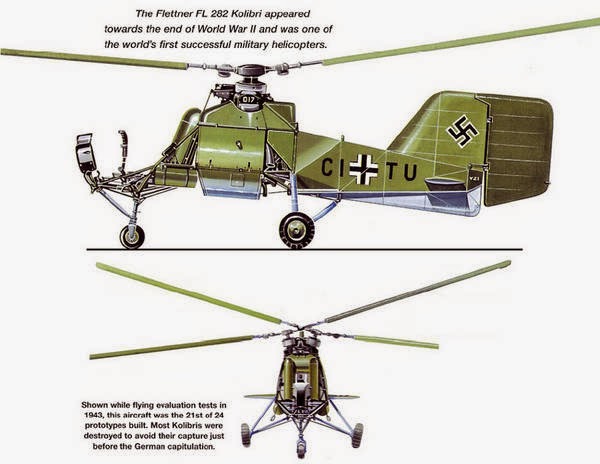 The most important modification Flettner made to the design of the new aircraft was to re-locate the engine behind the pilot's seat, which gave him and the observer a much-enlarged field of view. The drive was taken off the front of the crankshaft through a reduction gearbox and transmitted up and back through a universally jointed drive shaft and a cross-shaft connecting the two rotor shafts, which were set at an inclusive angle of 24 degrees, and inclined forward by 6 degrees. The rotor blades were mounted so that they were parallel when they were at 45 degrees to the aircraft's centreline. The fin and rudder were much larger than in previous Flettner designs, steering being accomplished by a combination of rudder movement and differential collective pitch control.

The 'Kolibri' proved to be very satisfactory indeed, despite a pronounced vibration period as the engine was run-up, with a maximum speed in level flight of 150km/h (93mph), a vertical rate of climb of 91.5m/min (300ft/min), a hover ceiling of 300m (985ft), and a service ceiling of 3290m (10,800ft). Its range, with just the pilot and maximum fuel aboard, was 300km (185 miles). Some 50 pilots were trained to fly it, most of them by Flettner's test pilot, Hans Fuisting. It was extremely manoeuvrable and very stable and at forward speeds in excess of 60km/h (37mph) could be flown hands-off once the controls were balanced.

SEA TRIALS
From 1942, trials at sea aboard the cruiser Köln demonstrated that the aircraft was usable even in very poor weather conditions, and by the following year, 20 were in service with the Kriegsmarine in the Mediterranean and the Aegean. In 1944, an order for 1000 Fl 282s was placed with BMW, which began tooling up for production at its Munich and Eisenach plants, but before manufacture could begin, both they and the Flettner works at Johannisthal were very badly damaged by Allied bombing. Anton Flettner went on to design a 20-seat passenger helicopter, the Fl 339, but never got beyond the development stag. 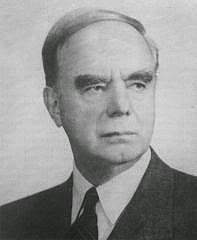 ANTON FLETTNER (*1885 -+1965): In 1905, Anton Flettner started his engineering career
designing control systems for use in Germany’s Zeppelins. Both during and after the
First World War, Flettner continued working on many innovative and successful projects.
In 1922, Flettner built a helicopter which however did not fly (in a tethered flight) until
1933. Flettner was one of the first helicopter designers to use intermeshing rotors. His
designs were superior to the Focke-Achgelis Fa 61 design and they also gave some of the
early efforts of Sikorsky’s a run for his money. Flettner emigrated to the U.S. in 1947,
worked for a while for the U.S. Navy and then started his own company, Flettner Aircraft
Corporation.

Flettner Fl 184: A gyroplane. The only single-rotor helicopter built by Flettner; all others had twin, intermeshing rotors. Single prototype destroyed in a fire; though the Kriegsmarine did have a strong interest in the capabilities of the aircraft.

Flettner Fl 185: Continuation effort of the Fl 184. Built more for design and testing purposes than anything else.

Flettner Fl 265: Built for the German Kriegsmarine in 1938, but the program was stopped because the KM found the Fl 282 to be more optimally suited for its needs. Only six were built. In an interesting twist, the Fl 265 was “combat tested” against a Fw 190 and Me 109 in mock battles - both fighters were not able to score a kill against the agile Fl 265 (this was recorded on film).

Flettner Fl 282 (Kolibri): One of the best helicopters developed during the war by any belligerent power. The world’s first fully operational helicopter. Built primarily to satisfy German Kriegsmarine requirements. Tested extensively in the Baltic Sea with the cruiser Köln taking a leading role in those tests; also tested in the Mediterranean Sea aboard the German minelayer “Drache”. Though ordered for mass production, only 22 were actually delivered for ASW operations. They were allocated to the following in 1943:
Bordfliegerstaffel 196 (known codes: T3+**, 6W+** (until July of 1943), 6I+**):
Gruppenstab (established 12.1937)
1/196
2/196
3/196
5/196

Flettner Fl 285: A theoretical design intended to fill the needs of the German Kriegsmarine. None were built. 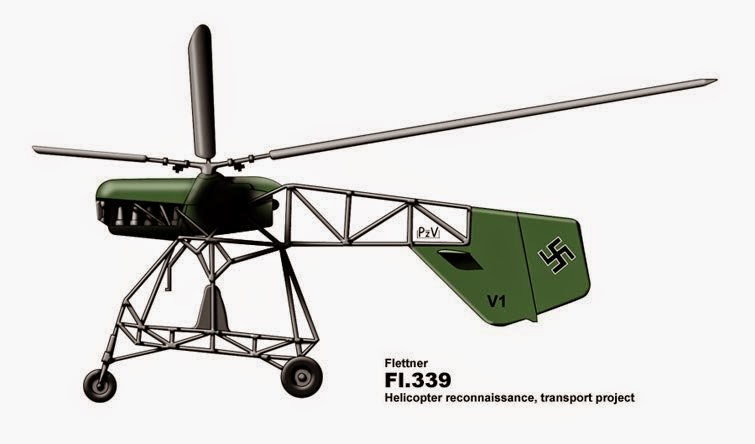 Flettner Fl 339: The Fl 339 was intended to serve the needs of the Wehrmacht as a communications, liaison and aerial observation platform. Two/four seaters were planned.  None were built as the project was canceled.

Posted by Mitch Williamson at 7:46 PM