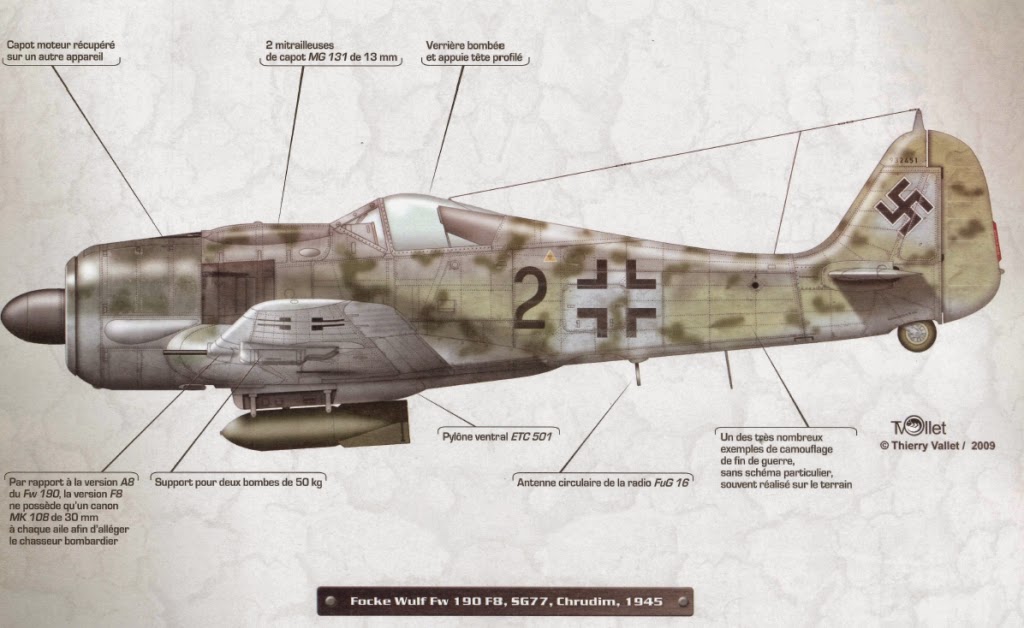 The Focke-Wulf Fw.190 F-8 was the most mass-produced variant of the Fw.190F series, based on the Fw.190A-8. By March 1944, Fw 190F-8s were also produced by the Arado Company in Warnemuende, and by April the NDW Company in Wismar. The aircraft was powered by the BMW 801 D-2 engine with improved injector on the compressor, which provided emergency power for up to 10-15 minutes at 1,000 meters of altitude. Otherwise the plane’s equipment was largely similar to the A-8, although the FuG 16 ZY radio was replaced with the FuG 16 ZS in April 1944. This allowed for direct communication with ground troops on the battlefield. A distinctive characteristic of the F-8 was a widened rear canopy. The new canopy was introduced in the latter half of 1944. It improved forward and downward visibility, which was very important for ground attack. On-board armament consisted of twin MG 131 machine guns in the fuselage and two MG 151/20E cannon in the wings.

In the spring of 1944 the F-8 model replaced F-3 on assembly lines.The base for the plane was A-8 armed with two MG131MGs in fuselage and MG151/20E in wings. It was quite short series and then the new model F-8/R1 was intruduced. Its armament was extended with underwing ETC50 (later with ETC70 or ETC71 ) bomb racks.In addition the new bulged cockpit conopy was introduced.

Here a few variants of the F-8 assault Wurger with Umrustbausatz kits and Rustsatz kit standards,

Fw 190F-8/U1 - long range fighter-bomber (provided as replacement for the Fw 190G-8 by then withdrawn from production). The plane had underwing pylons installed from the Bf 110 V.Mitt-Schloss (Verkleidetes Messerschmitt Schloss) for mounting two 300 litre fuel tanks and additional fuel pumps inside the wings. Some planes had ETC 503 bomb racks in place of the pylons that gave the capability of carrying two additional 250 kg bombs (in this case the fuel tank was mounted under the fuselage) on ETC 501 racks. It was possible was to mount bombs on all points (2x250 kg and 1x500 kg), this reduced range but made the Fw 190A dangerous plane carrying 1000 kg of bombs.

Fw 190F-8/U2 - torpedo plane with two underwing ETC 503 racks or under-fuselage mounted ETC 504 (previously ETC 501) bomb rack. The plane was equipped with a special sight system, TSA 2A (Tiefsturzangle 2A) for precise aerial torpedo BT (Bombentorpedo) aiming. Using this torpedo it was possible to attack targets from a higher altitude and from a higher angle than in the case of an ordinary aerial torpedo LT (Lufttorpedo). It was planned to use two BT 400 or one BT 700 torpedo. Other armament was reduced to two fuselage mounted MG 131 machine guns. A small number of these planes were in service with 11./KG200.

Fw 190F-8/U3 - torpedo plane adapted for transportation of the heavy BT 1400 torpedo on an under-fuselage mounted ETC 502 pylon designed especially for this in TWP Gotenhafen-Hexengrund (see the section "Operational use"). His plane had a lengthened tail wheel strut to eliminate the possibility of striking the ground with the torpedo. The plane was equipped with the TSA 2 sight system coupled with a FuG 101 radio altimeter. This version was powered by the more powerful 2000 hp (1470 kW) BMW 801 TS engine. The Ta 152 tail was also mounted.

Fw 190F-8/U4 - night fighter-bomber powered by a BMW 801 TS engine with exhaust flames dampers. Standard equipment was: PKS 12 autopilot device, FuG 101 radio altimeter, TSA 2A sight system and other devices to aid night navigation and flight. Armament consisted of aerial torpedoes and bombs that could be carried on two underwing ETC 503 bomb racks. Other armament was reduced to two MG 151/20 E cannons in wings. Probably only one plane built (W.Nr. 586596). Admittedly, NSGr 20 used numerous Fw 190F-8 with flame dumpers and underwing mounted bomb racks but it was not a F-8/U4 but rather field adapted, standard G-8 or F-8/U1 planes.

Fw 190F-8/U5 - simplified variant of F-8/U2 modification, without some of the external equipment.

Fw190F-8/Pb1 - Panzerblitz 1 (Pb 1) system was developed consisting of six and, more often, eight R4M air-to-air missiles. They were adapted for tank destroying by mounting an 80 mm M8 type warhead for an armour penetration of up to 90 mm. Using the Pb 1 unit it was possible to destroy tanks at a 200 m distance with rockets being fired in salvo or in pairs. The only limitation was a maximum speed of 490 km/hr, not to be exceeded during missile firing. Up to February 1945 the Luftwaffe received 115 Fw 190F-8/Pb 1 planes.

Fw190F-8/Pb2 - Panzerblitz 2 (Pb 2) unit( the successor to the Pb 1 unit). The main difference between them was the replacement of the M8 warhead by a hollow-charge warhead able to penetrate up to 180 mm armour. Also developed was the new missile system Panzerblitz 3 (Pb 3) with a 210 mm hollow-charge warhead, but it was not operational by the end of the war.

Posted by Mitch Williamson at 2:13 AM