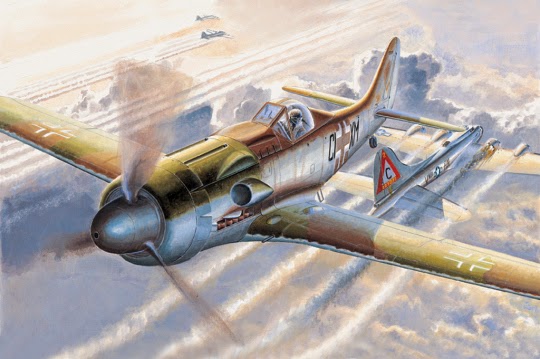 The Ta 152 with JG 301 never flew at its proposed high altitude of 35,000 feet upwards. Only in test trials before it became combat operative. All combat engagements against Soviet fighters, P-47’s and Tempests were at medium altitude so the “hot rod” was never able to prove itself except for one case when Kurt Tank himself took a C variant up and got bounced by P-51D’s. Kurt hit the MW 50 and “walked away” from the Mustangs…… 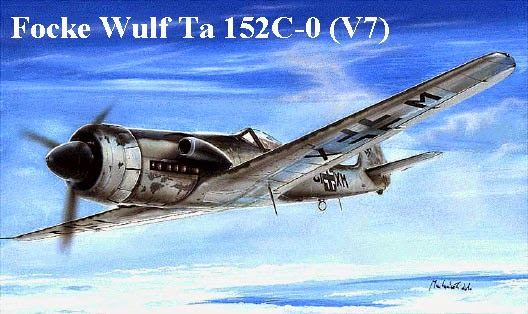 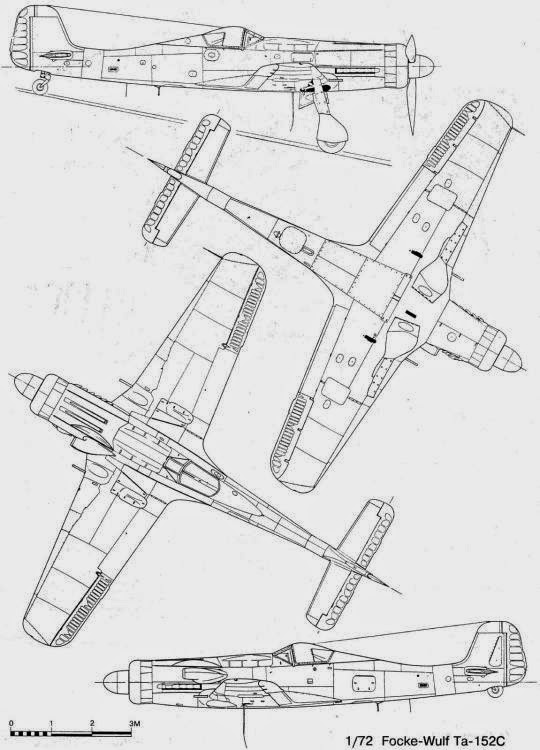 Focke-Wulf Ta 152C
From the beginning Kurt Tank wanted to use a Daimler Benz inline V-12 for his Fw 190 series of fighters, but had to settle for the BMW radial for the early series. Finally the RLM gave permission for him to use the Jumo 213 in the Fw 190D and the Daimler Benz in a few prototypes. The reasoning behind not allowing him the use of the DB 600 series engines was that production was needed for the Messerschmitt Bf 109 fighters and could not be spared for Focke-Wulf.

While production started up on the Ta 152H, Tank got permission to use the DB 603 for the Ta 152 series in the autumn of 1944. The Ta 152C with the lighter DB 603 engine was considered primarily as a medium altitude Zerstorer to compliment the high altitude Ta 152H and had a wingspan similar to the earlier Fw 190D. The MW 50 boost installation for the enhancement of low-altitude performance was standard as was an additional pair of 20mm mounted in the fuselage unlike the Ta 152H which only had a pair in the wings.

A Fw 190D prototype had been rebuilt and flown with a DB 603 engine in support of the Ta 152C program, and this plane took to the air for the first time in October 1944. During December 1944 and January 1945, the first Ta 152C-0 service test aircraft joined the test program. The definitive production version was to be the Ta 152C-1, and it was hoped that the first examples could be rolling off the production lines in April of 1945. However, series production of the Ta 152C was only just beginning when Allied forces overran the assembly plants, so this fighter never entered service with the Luftwaffe.

Which was the better aircraft is hard to answer in a meaningful way.

The P-51 was in full service from 1944 onwards, the Ta 152 came into service in very small numbers from February 1945... So the potential qualities of the Ta 152 had little chance to show themselves.
But the few pilots that flew the aircraft in combat in the last desperate months, saw it as their life insurance. Among its virtues they commended its turning and climbing ability, general handling, and take-off and landing behavior.

It is worth noting, that most of the aircraft (the majority Ta 152H-0) lacked the wing tanks, some even the MW-50 system, and most the GM-1. So the performance fell far short of the intended performance of the production series. The Jumo 213 didn't run as smoothly as expected, especially there were problems with the supercharger high gear. There were problems with the pressurized cockpit.

Production commenced with only a good 30 hours of test flight with rebuilds of old Fw 190's. No proper prototype entered the test program before production went ahead!

Had there been time to iron out all the wrinkles of the design, it would in all probability have been a star performer. The excellent lateral maneuverability of the Fw 190 was of course lost to some degree, but there were gains in all other aspects (except, perhaps, at very low altitudes).

So, which were the better aircraft? Certainly the Ta 152 at high altitudes. The Ta 152 also had a more potent armament (max. 4x20mm + 1x30mm all centrally positioned). But the P-51 was also further developed into a more lightweight high-powered configuration.

I think the best answer to the question would be: there's simply not enough data available to answer the question. But the Ta 152 was a beaut!

Posted by Mitch Williamson at 9:53 PM