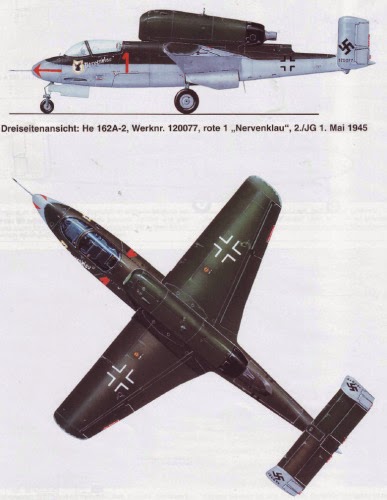 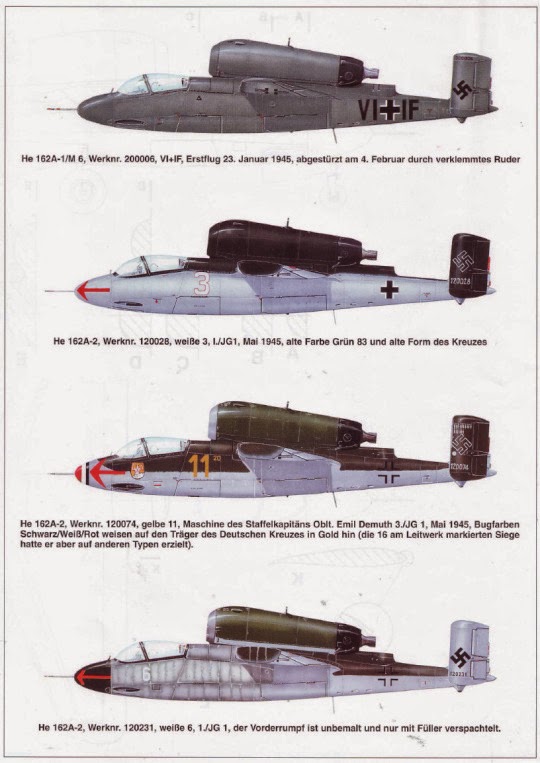 As the war turned irretrievably against the Third Reich, Reichsmarschall Hermann Göring proposed a Volksjäger, or “People’s Fighter”—a cheap, simple jet made of nonstrategic materials and capable of being flown even by hastily trained Hitler Youth. “Projekt Salamander,” issued on September 8, 1944, was not beyond the technical capabilities of Germany’s advanced aircraft industry at that time, but the requirement that the design be drafted in twelve days and the prototype flying within ninety days placed it in the realm of fantasy. Generalmajor Adolf Galland, chief of the Jagdwaffe, opposed the whole idea, and only the Ernst Heinkel Flugzeugwerke made a serious effort to fulfill it. Working round the clock, the Heinkel designers managed to come up with a basic layout in four days. Of mixed construction, the Heinkel He 162V1 had a fuselage of light steel with a wooden nose cone, a single-piece wooden wing with metal down-angled tips, and twin vertical stabilizers at the ends of a V-shaped tail plane. A BMW 003E axial-flow turbojet engine, producing a maximum of 2,028 pounds of thrust, was mounted above the fuselage aft of the cockpit.

First test-flown by Gotthard Peter on December 6, 1944—incredibly, within the required time frame—the He 162V1 displayed a good turn of speed but marked instability along its longitudinal axis. During a subsequent flight on December 10, it reached a speed of 560 miles per hour at 20,000 feet—faster than an Me 262—but during a final high-speed run at low altitude, the He 162 suddenly rolled hard to the right and crashed in a fireball, killing Peter. An investigation concluded that the glue used in the plane’s wing had failed under the aerodynamic stresses of high-speed flight.

By that time, Göring had already committed Heinkel to the production of his pet project, so its engineers did their best to make it more stable, increasing the wing area and the span of its tail plane. Because the twin 30mm MK 108 cannon intended for the He 162A-1 placed excessive stress on its light airframe, two fuselage-mounted 20mm MG 151s had to be substituted in the He 162A-2. Given the location of the engine intake, waiting to suck in the pilot if he had to bail out, an ejection seat, activated by an explosive cartridge, was added. The definitive He 162A-2 model was rushed into production, but a two-seat version was never built, and training consisted of veteran pilots getting a cockpit briefing at Erprobungskommando 162 at Rechlin-Roggenthin, and then going up to take its measure solo. In February 1945, the He 162 Spatz (Sparrow) entered service in JG 1, commanded by Oberstleutnant (Lieutenant Colonel) Herbert Ihlefeld.

Ihlefeld, a 123-victory ace who had scored his first nine flying Bf-109Bs over Spain, was not impressed with this latest Heinkel product. “The jet was rubbish,” he said in a telephone interview in 1989. “Wood and glue. In very cold temperatures it became brittle. The shaking from the engine made it a death trap, but when the weather warmed up it became flexible. In my opinion it was a flying torch. Just a sad waste of resources, really.”

By mid-March, JG 1 had twenty-five combat-ready He 162s, but the loss of nine experienced pilots killed and five injured in accidents, against only one to enemy action, gave a clue as to how the Volksjäger would have fared in the hands of a neophyte Hitlerjugend. The earliest combat loss, Harald Bauer, was ferrying an He 162 to Varel on March 24 when he was spotted by the lead navigator of a B-17G of the 390th Bomb Group, who directed escorting Mustangs to shoot him down. Wounded in the leg and discounting bailing out as too chancy an option, Bauer belly-landed and found himself surrounded by American soldiers of the 2nd Armored Division, who promptly took him prisoner. Oddly, no corresponding claim has been found among VIII Fighter Command’s Mustang pilots for that day.

On April 15, Ltn. Rudolf Schmitt of 1./JG 1 claimed to have had a brief, bloodless run-in with a Spitfire. On the nineteenth, a captured Royal Air Force pilot claimed to have been shot down by a jet, and Oberst Ihlefeld attributed the victory to Fähnenjunker-Feldwebel (Sergeant/Officer Cadet) Günther Kirschner of the 3rd Staffel (3./JG 1). Kirschner himself was unavailable to testify, however, because shortly afterward he crashed to his death. He was apparently the victim of Flying Officer Geoff Walkington, a Tempest V pilot of No. 222 Squadron RAF, who claimed to have attacked a small twin-tailed jet fighter he’d never seen before, and although unable to catch up at 360 miles per hour, he saw it make the fatal effort of turning sharply to the right, allowing him to close the range and shoot it down.

With casualties mounting, Ihlefeld, joined by Galland and other veteran officers, confronted Göring at his estate at Karinhall. As Ihlefeld recalled it:

Galland was very much against the Volksjäger, claiming that it was a waste of time, money and lives. He argued that it was stupid to place these young boys in this thing. I agreed, and this was in front of Göring, in April. Göring waved away our concerns, and he told Galland, “You will do as you are told, and so will you, Ihlefeld.” Well, I told him that unless I saw that a pilot was well qualified, I would not be responsible for killing young men. Galland then said that he would never follow that order. Göring turned red and became angry, but said, “Then do what you can.” We left Karinhall with the others, and everyone just looked at me. [Günther] Lützow said, “What will you do, Herbert?” I told him that as far as I was concerned, my new pilots would all be unable to pass the flight physical.

JG 1 formally began operations against low-flying Allied fighter bombers on April 21. Three days later, Hptmn. Paul Heinrich Dähne, Gruppenkommandeur of II./JG 1 and a Ritterkreuz recipient with ninety-nine victories previously scored over the Eastern Front, lost control of his He 162 and crashed near Warnemünde, dying due to a malfunction of the ejection system. On the twenty-sixth, Uffz. Helmut Rechenbach of 3./JG 1 claimed a de Havilland Mosquito, with his Staffelführer, Obltn. Emil Demuth, and Stabsintendant (Staff Director) Siegfried present to bear witness, but again the victor fatally crashed soon afterward, before he could submit a combat report.

On May 1, JG 1 was based at Leck in Schleswig-Holstein, from which Ltn. Rudi Schmitt was flying his fifth mission on May 4 when he caught what he reported as a low-flying Hawker Typhoon and sent it crashing to earth. In fact, Flying Officer M. Austin of No. 486 Squadron, Royal New Zealand Air Force, was shot down, bailed out of his Tempest, and was taken prisoner.

Unfortunately for Schmitt, however, his claim was disputed by a local flak unit, which got the credit instead. Any further hopes for the Volksjäger to balance some success against all the sweat and blood which had gone into its hurried creation ended that evening, as British troops occupied Leck.

Because of Göring’s crash program, numerous He 162s were available for the Allies to evaluate—and later to preserve in their museums. While the Me 262 pointed to the future, however, the He 162 endures merely as an aeronautical curiosity, a monument to desperation, and a far-fetched deviation along the road to jet-plane development.
Posted by Mitch Williamson at 9:57 PM