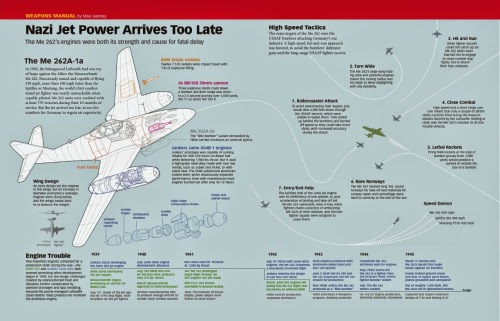 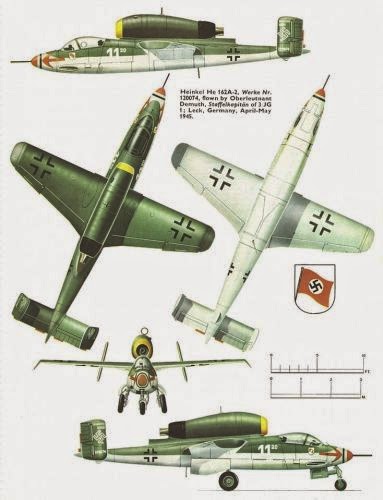 The basic constituents of the jet engine were patented in 1930 by the British aeronautical engineer Frank Whittle (1907-96). A British aircraft with a Whittle engine successfully flew in May 1941. German engineers patented an engine in 1935, but work on jets proceeded much more quickly in Germany than in Britain, and the first turbojet-powered aircraft, a Heinkel HE-178, flew in August 1939, a month before the start of World War II.

At first Adolf Hitler was a strong supporter of developing jet technology, but during the course of the war, acting on the advice of Luftwaffe chief Hermann Göring, he diverted production from jets to increasing the output of greater numbers of conventional aircraft. For this reason, Germany never produced jet aircraft in great quantity during the war. Nevertheless, both Germany and Britain recognized the jet as the wave of the future, at least for small fighter aircraft. In contrast, the American military and the aircraft industry were slow to develop jets, and the first American military jet fighter, the Shooting Star, did not become operational during the war. In Britain and Germany, the RAF and the Luftwaffe both flew jets in combat by 1944. Neither nation fielded a sufficient number to make a significant impact on the air war.

The British jet was the de Haviland Meteor. The principal German plane was the Messerschmidt Me 262. The Me 262 was extremely effective against U. S. bombers, since the aircraft easily outran even the best U. S. fighter escorts, such as the P-51 Mustang. The drawbacks of the Me 262 were its short range and flight duration-it was extremely fuel hungry-and its relatively poor maneuverability relative to piston fighters. Most important, it was introduced too late in the war and was produced in quantities too small to have a significant effect on the outcome of the struggle.

The Me 262 was actually very much a compromise aircraft, and its designers were not particularly happy with many aspects of it. The advanced swept wing was an inelegant solution to a late engine change that significantly altered the center of gravity, and the underslung nacelles were a solution to oversized and overweight power plants. The aircraft had precious little serious wind-tunnel time and a disappointingly low critical Mach number. In all, like many aircraft before it, the Me 262 was simply the best that could be built given the circumstances.

The Luftwaffe experimented with other jet designs, as well as the ultraradical tailless flyingwing, the Me 163, which used a liquid-fueled rocket motor instead of an air-breathing jet engine. The Me 163 could fly at nearly 600 miles per hour and quickly climb above bomber formations, then attack from above-the ideal approach against bombers. Fuel lasted a mere 12 minutes, however, making the aircraft highly impractical.

A training unit was formed in late 1942, well before the first powered flight, operating from Peenemünde airfield. The first operational missions of the Me 163B were in May 1944, but its short range and low reliability did not allow actual engagements until August. The Me 163Bs never became a significant threat, although 279 Komets were delivered before the end of the war.

In 1939, the Heinkel He 176 and Heinkel He 178 became the first aircraft to fly under liquid-fuel rocket and turbojet power respectively, and Heinkel was the first to develop a jet fighter to prototype stage, the Heinkel He 280. This latter aircraft never reached production, however, since the RLM wanted Heinkel to concentrate on bomber production and instead promoted the development of the rival Messerschmitt Me 262. Very late in the war, a Heinkel jet fighter finally took to the air as the Heinkel He 162 Volksjäger (People’s Fighter) but it had barely entered service at the time of Germany’s surrender.

Had Germany devoted more development and production effort to jet aircraft, it is likely that both the United States and Britain would have been forced to curtail the strategic bombing of Germany, and the war might well have been prolonged.

Jet Engines
A jet engine works according to a simple principle, based on Newton’s third law of motion: “To every action there is an equal and opposite reaction.” A jet engine produces a forward thrust from the consequent reaction. Air is sucked in the engine and compressed. Fuel is added and the air/fuel mix is ignited, causing a rapid extension of the gases, which are expelled through the engine outlet, thus providing thrust and pushing the aircraft forward. This was a theoretical possibility as early as the early 1900s, owing to the work of pioneers such as René Lorin and Konstantin Tsiolkovsky. The jet engine became a practical reality in the late 1930s. Laws of physics imposed a speed limit about 500 mph on a piston- engined aircraft, and a good alternative was offered by the turbojet engine. This promised to deliver much higher thrust-to-weight ratios, but ran at high temperatures, making it difficult to control. Besides, alloys such as chromium and nickel-absolutely necessary to build a jet engine-were extremely expensive.

With the shadow of war came the inevitable boost to airplane manufacturers, and certainly Germany provided the trigger with its massive rearmament program commenced in 1935. Although designers were hard at work on jet propulsion, the results of their labors were varied. The technological advances were great, but it was piston-engined aircraft that fought World War II.

The basic scheme of jet power had several variations, the purpose being to accelerate and discharge a fast-moving jet of exhaust gases to generate high-velocity forward thrust.
A ram-jet engine is the lightest and simplest jet engine. Usually given the necessary high initial velocity by rocket boosters or catapult, it was used mainly for long-distance, high-altitude purposes. In its most primitive form, the ram-jet engine had no moving parts, and resembled a stove pipe into which air was rammed by an inlet diffuser; a spray of fuel was added and ignited, and hot gases were burned in the combustion chamber or burner. The expansion of hot gases after fuel injection and combustion accelerates the exhaust air to a velocity higher than that at the inlet and creates energy expelled at the other end of the tube (nozzle) and thus positive push or thrust.

A pulse-jet engine (developed by German engineer Paul Schmidt from the ram-jet in the 1930s) worked with the same principle, but operated using a two-part cycle. Ram-jet and pulse-jet engines do not start working until the plane has a speed of about 200 mph, so a launching device has to be provided for takeoff. During World War II this consisted of either launching from a parent aircraft, assistance by additional rocket engine, or catapult. Once there was enough air pressure, the valves in the air intake opened, letting air in. This was then mixed with fuel and ignited. The resulting explosion closed the valves and burning exhaust gases exited at high velocity to the rear, creating thrust in bursts as the process was automatically repeated.
The turbojet engine is the basic engine of the jet age. It is the largest and most complicated jet engine composed of inlet, compressor, combustor (or burner), turbine and nozzle. The inlet or air intake (which can consists of fans) sucks air into the engine. The compressor draws in and pressurizes large amount of air (thus increasing its pressure) which is forced into the combustor. In the combustor, high pressure air is mixed with a highly flammable fuel; this is injected, ignited, and combusted, producing very hot gases which expand rapidly rearward and pass through the turbine wheels; a part of their energy is used to power the compressor (as the turbine is connected to the compressor by an axle). The exhaust gases exit at the rear of the engine giving the aircraft its forward push or thrust. For additional thrust, an afterburner or augmenter can be added. Extra fuel is introduced into the hot exhaust and burned, with a resultant increase of up to 50 percent in engine power by way of even higher velocity and more push. Finally the gases exit rearward via a nozzle whose shape increases velocity of gases and generates more thrust.

A turboprop engine used the power and thrust from a jet engine to turn a propeller. As in a turbojet, hot gases flowing through the engine rotate a turbine wheel that drives the compressor. The gases then pass through another turbine, called a power turbine. This is coupled to the shaft which drives the propeller through gear connections, and the rotating propeller provides thrust. The turbopropeller engine attracted much attention in the late 1940s and early 1950s, but lost out because the jet engine was faster.
Posted by Mitch Williamson at 5:31 PM