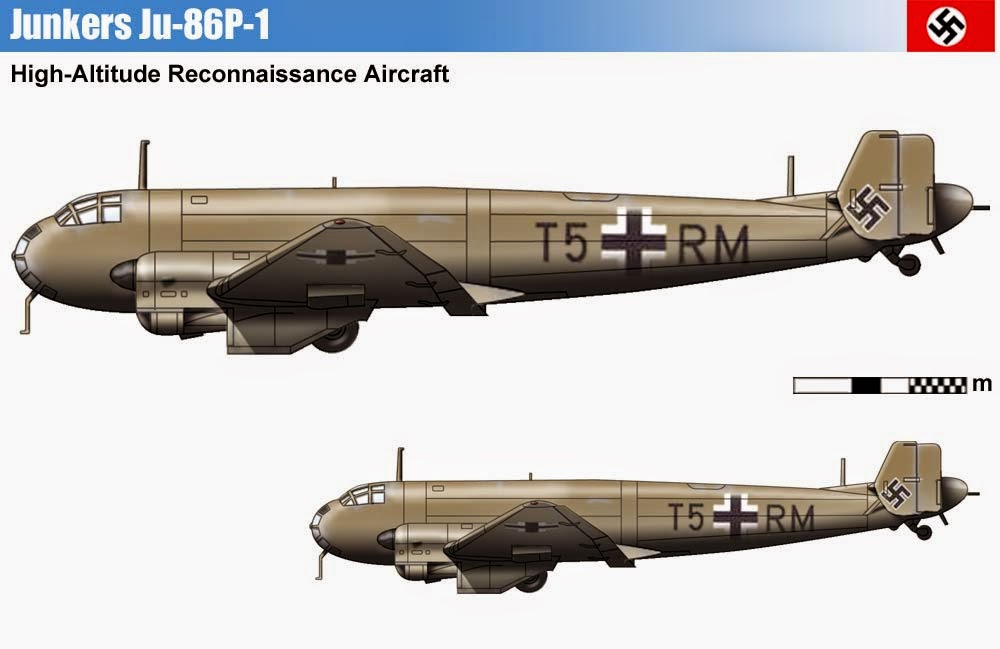 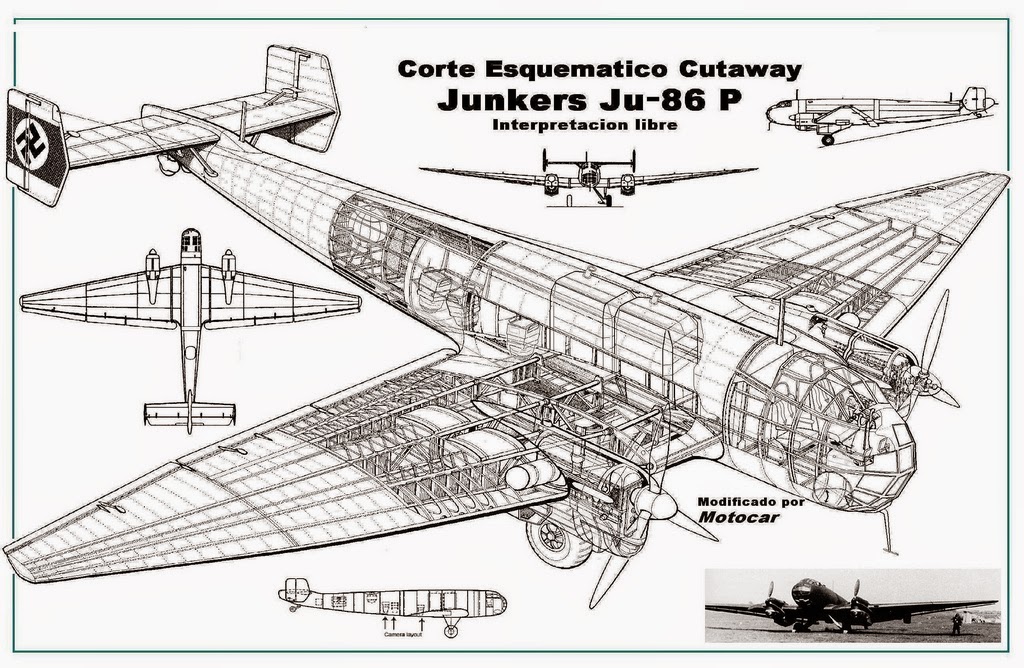 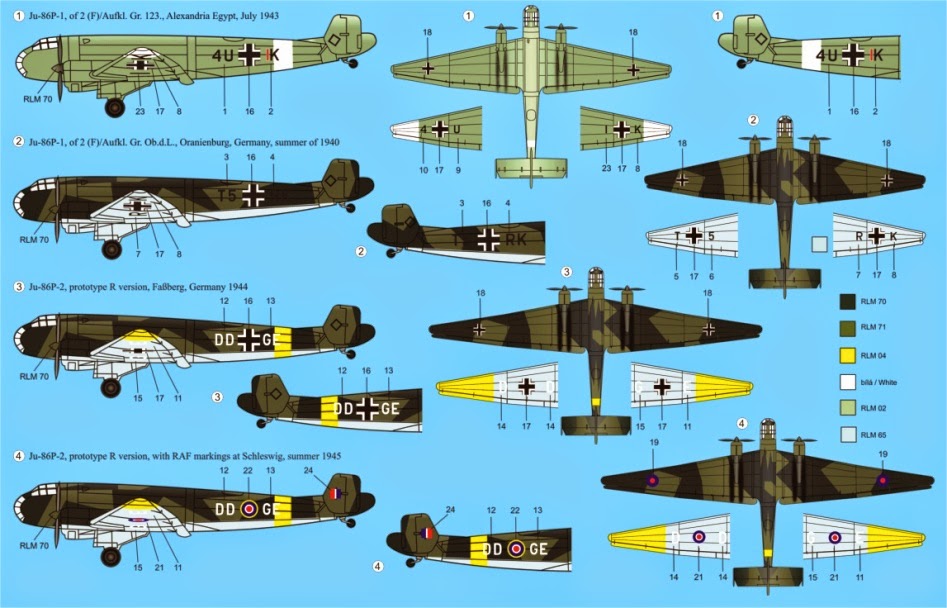 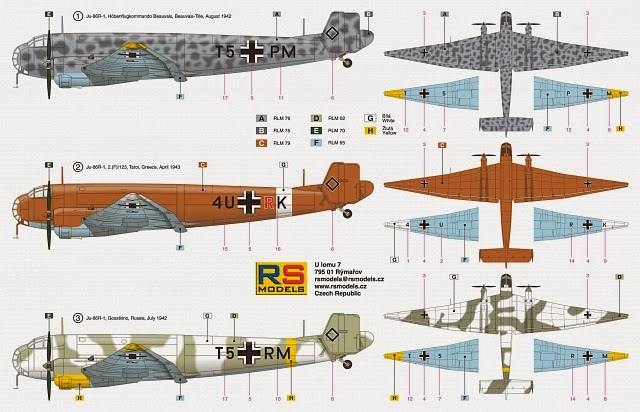 In January 1940, the Luftwaffe tested the prototype Ju 86P with a longer wingspan, pressurized cabin, Jumo 207A1 turbocharged diesel engines, and a two-man crew. The Ju 86P could fly at heights of 12,000 m (39,000 ft) and higher on occasion, where it was felt to be safe from Allied fighters. The British Westland Welkin and Soviet Yakovlev Yak-9PD were developed specifically to counter this threat.

The Luftwaffe ordered that some 40 older-model bombers be converted to Ju 86P-1 high-altitude bombers and Ju 86P-2 photo reconnaissance aircraft. Those operated successfully for some years over Britain, the Soviet Union and North Africa. In August 1942, a modified Spitfire V shot one down over Egypt at some 14,500 m (49,000 ft); when two more were lost, Ju 86Ps were withdrawn from service in 1943.

Junkers developed the Ju 86R for the Luftwaffe, using larger wings and new engines capable of even higher altitudes - up to 16,000 m (52,500 ft) - but production was limited to prototypes.
In 1933, in defiance of the terms of the Versailles Treaty, the new Nazi government in Germany created a foreign intelligence agency, the Abwehr, headed by Captain Conrad Patzig. He was replaced in January 1935 by Admiral Wilhelm Canaris, who developed an organization split into three Abteilung devoted to secret intelligence, sabotage, and security. Each of the three sections included air branches, designated as I Luft, II Luft, and III Luft respectively. Although run from headquarters in Berlin, Abwehr operations were dispersed to Abwehrstellen, regional centers corresponding to the German military districts, and to Kriegsorganisationen established in neutral and occupied territories, with internal structures mirroring the head office at 72 Tirpitzufer.

Abteilung I Luft was responsible for preparing a prewar survey of airfields in England, and in 1935 dispatched a lawyer, Dr. Herman Goertz, to tour the country accompanied by a girl he claimed as his niece, but his indiscretion led to his arrest and imprisonment. As a result of this episode, the Abwehr was banned from conducting further similar operations and was obliged to rely on photographs taken from aircraft flown by Theodor Rowehl.

THEODOR ROWEHL.
Prior to the outbreak of World War II, the Luftwaffe conducted a series of aerial photographic flights across Europe in an He-111 twin-engined bomber painted in Lufthansa livery and flown by Theodor Rowehl. A reconnaissance pilot in World War I, Rowehl was renowned for having penetrated British airspace in his Rhomberg C-7. After the war, he had continued to fly a chartered aircraft until he began to supply the newly formed Abwehr with photos he had taken over Poland and East Prussia. Having begun with a single Junkers W-34 based in Kiel, Rowehl soon gathered a group of pilots around him to form an experimental high-altitude flight of five aircraft based at Staaken, but training at Lipetsk, the Luftwaffe’s secret airfield in Russia. His work impressed Herman Göring and he was transferred to the command of Otto (“Beppo”) Schmid, head of the Luftwaffe’s intelligence branch at Oranienburg, to fly specially adapted Heinkel 111s equipped with cameras designed by Carl Zeiss.

Under Rowehl’s leadership, the Luftwaffe’s air reconnaissance wing [Aufklärungsgruppe Ob.d.L.] grew from three squadrons to 53 on the outbreak of war in September 1939, amounting to 602 aircraft, by which time much of Germany’s neighboring territories had been mapped. The organization was divided into 342 short-range aircraft, dedicated to tactical support, and 260 longer-range planes, mainly Junker 88Ds and Dornier 17Fs, undertaking strategic missions.

In December 1943, following the death of his wife in an Allied air raid, Rowehl resigned his command. His efforts led to the creation of a unit operating for the Luftwaffe's 5th Branch (air intelligence). The new unit flew high-altitude photoreconnaissance missions over Europe, Africa, Soviet Union and this in a variety of military and even civilian aircraft.

Later he would be replaced by Captain Karl Edmund Gartenfeld. Replaced is not correct as he was to form his own new group in 1942. This would lead to the creation of the famous Kampfgeschwader 200.
Posted by Mitch Williamson at 5:58 PM