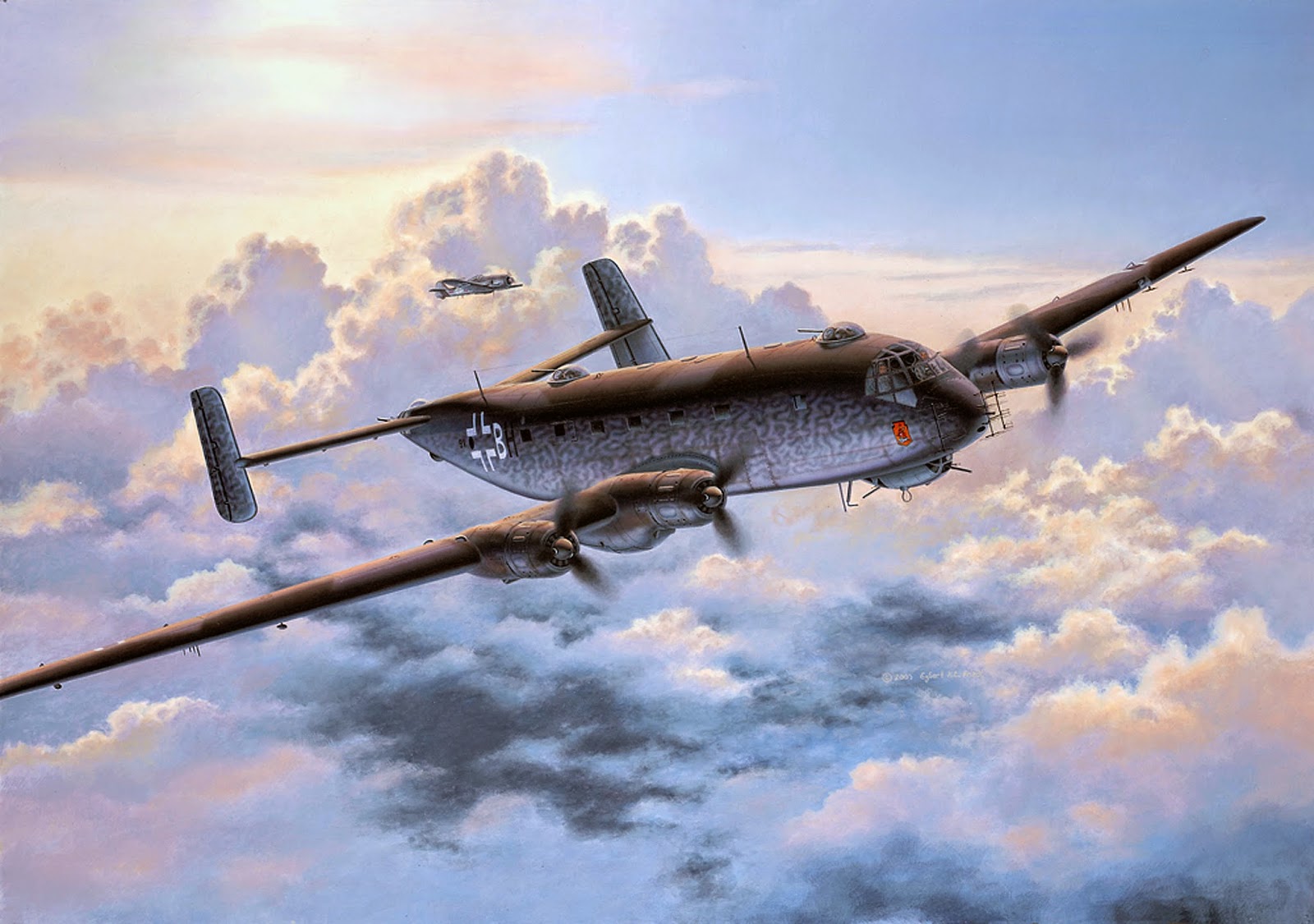 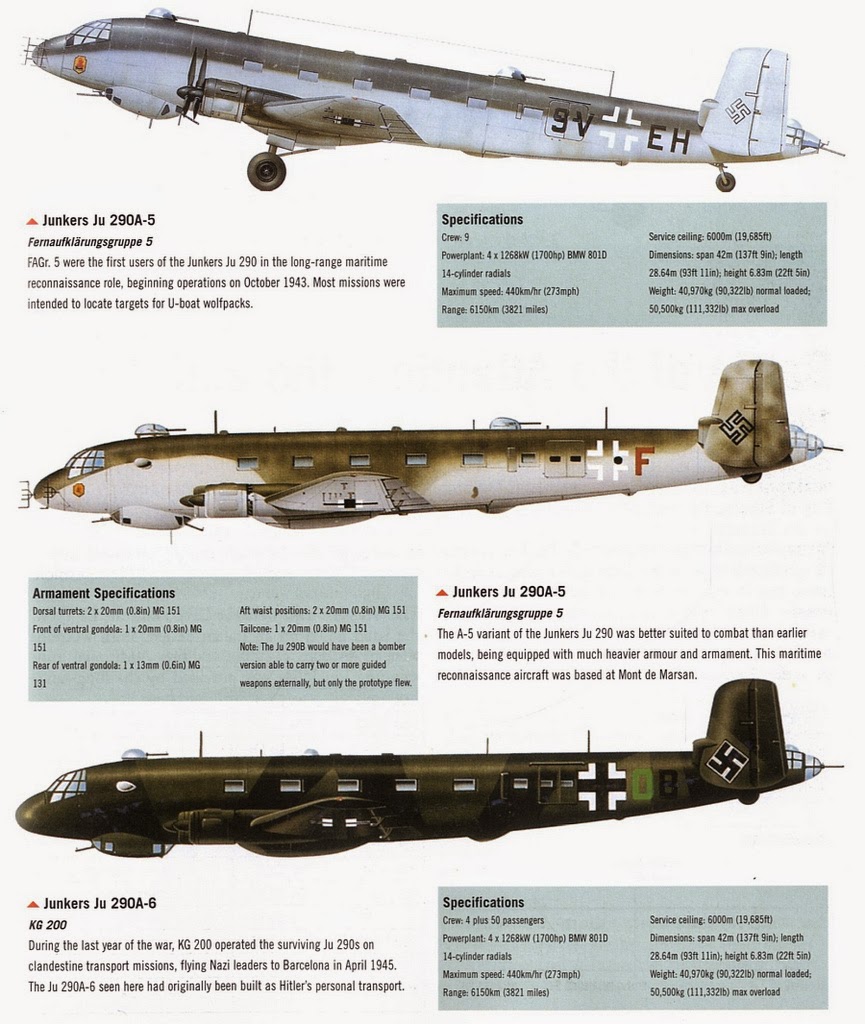 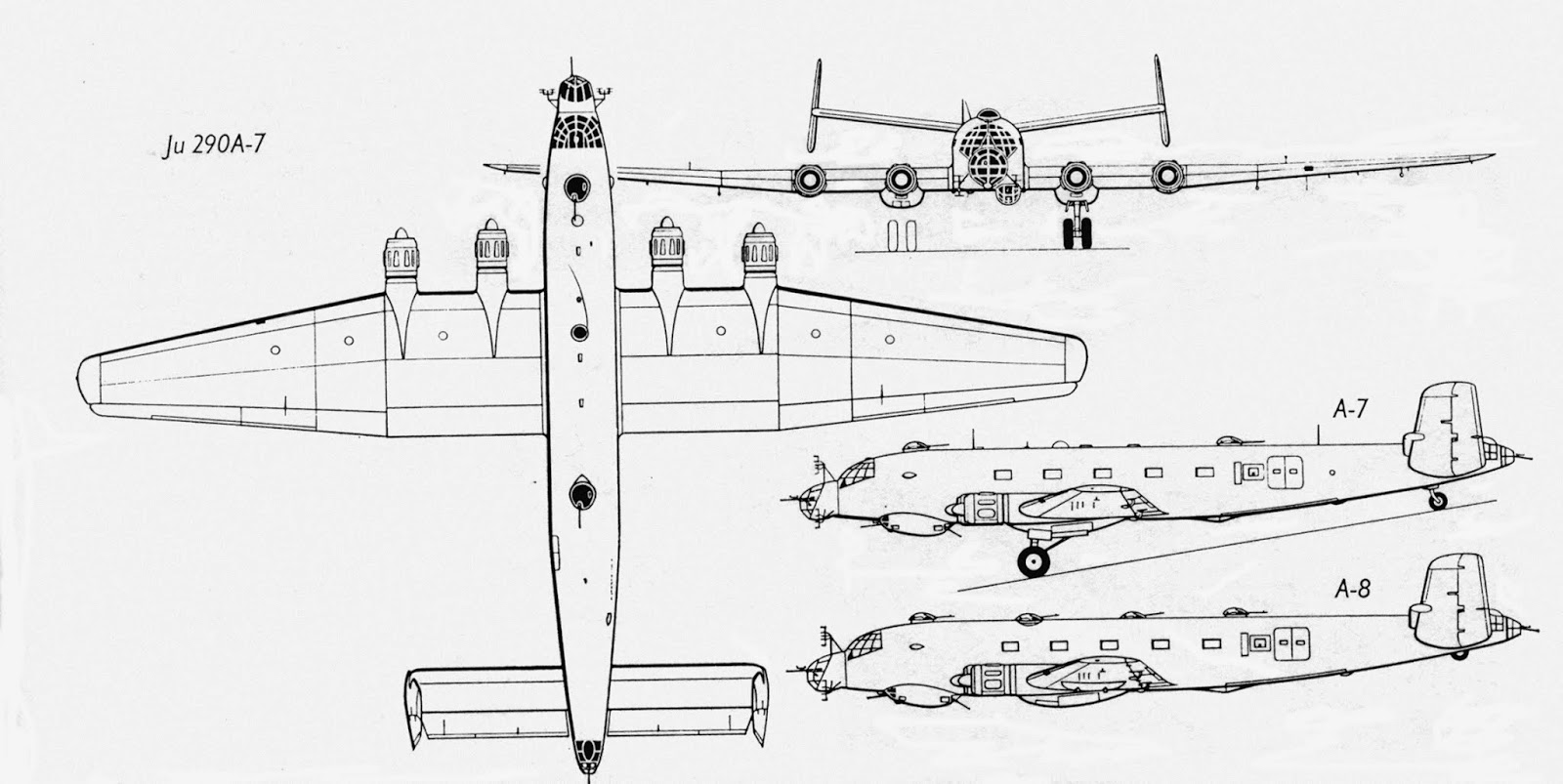 The Ju 290 long-range bomber was a military development of the Junkers Ju 90, a four-engined airliner which had been in regular service with Deutsche Lufthansa since 1938.

From the beginning of series manufacture of the Ju 290 and the maiden flight of the Ju 290 V1 prototype in July 1942, until production ceased in July 1944, a total of 48 machines had been built and delivered with a whole raft of various equipment fits depending upon each variant's intended operational role. The Junkers Ju 290A-7 was one of the most interesting versions of the A-series. Employed as a long-range bomber and reconnaissance machine against shipping targets, its most prominent external feature was the glazed gun position protruding from the nose. It also included significant improvements in the internal structure.

As a long-range anti-shipping weapon the A-7 was equipped with search radar and guidance systems. It was also fitted with ETC- 2000 weapons racks beneath the fuselage and wing outer sections to enable it to carry three Henschel Hs 293 remotely-controlled glide bombs. Defensive armament comprised eight weapons stations, each operated manually by members of the eight- to ten-man crew.

A further development of A-7 was the Ju 290A-8. Also intended for the anti-shipping role, this too carried three Henschel Hs 293 glide bombs but featured increased defensive armament.

A planned further improvement of the Ju 290B-1 bomber was the Ju 290C. This would have had an even stronger fuselage and more powerful 1,850 hp BMW 9-801 engines. Additional projected versions of the Ju 290B-1 included a long-range reconnaissance variant and a heavy transport with a large, ventral loading ramp. The Ju 290D long-range bomber was an improved Ju 190C, as too was the Ju 290E night bomber project, which could carry an even heavier bomb load in its enlarged bomb-bay.

Operational history
A special long-range reconnaissance group, FAGr 5 (Fernaufklärungsgruppe 5), had been formed on 1 July 1943 and during the late summer of 1943 three of the new Ju 290 A-2s were delivered to its 1 Staffel, which became operational at Mont-de-Marsan near Bordeaux on 15 October of that year. They flew their first operational missions in November 1943, shadowing Allied convoys in cooperation with U-boats, and often remaining airborne for up to 18 hours.

Five Ju 290 A-3 aircraft with more powerful BMW 801D engines followed, as did five Ju 290 A-4 aircraft with improved dorsal turrets mounting 20 mm MG 151/20s. The Ju 290s were well suited to their patrol role and began replacing the Fw 200 Condors. An A-4, Works no. 0165, was experimentally equipped with attachments for FX 1400, Henschel Hs 293, and Hs 294 missiles, and fitted with FuG 203e radar; it was surrendered to the US after the war and flown across the Atlantic to the USA.

In November 1943, a second Staffel was activated and, with a range of over 6,100 km (3,790 mi) the Ju 290s ranged far out over the Atlantic, relaying sightings of Allied convoys to U-boats. 11 Ju 290 A-5s with increased armour protection, 20 mm MG 151/20 cannons in place of the earlier waist-mounted machine guns, and self-sealing fuel tanks were delivered to FAGr 5 early in 1944, as were around 12 of the Ju 290 A-7 version; the A-7 could carry three Hs 293 glide bombs or Fritz X anti-ship missiles and featured a redesigned nose section which combined a 20 mm cannon installation with the FuG 200 radar aerial array.

Towards the end of 1943, Admiral Dönitz demanded that the entire output of Ju 290s be made available for U-boat warfare. However, a mere 20 machines were assigned for this purpose. Even though both Hitler and Dönitz demanded an increase, the Luftwaffe General Staff declared it was unable to assign any more for naval reconnaissance purposes. The General Staff argued that there could be no increase in output so long as the Luftwaffe was not conceded "precedence in overall armaments".

In the spring of 1944, after Albert Speer had taken over the direction of air armaments, the Luftwaffe High Command baldly announced that production of the Ju 290 was to be suspended despite it being urgently needed for maritime reconnaissance; suspending production meant that resources could instead be diverted to building fighter aircraft. At that point in time, Speer's position was weak and Hermann Göring was trying to find allies to help him strip Speer of his power, and the Luftwaffe was not prepared to offer the Navy more than "goodwill".

On 26 May 1944, shortly after daybreak, a Sea Hurricane piloted by Sub Lieutenant Burgham from the escort carrier HMS Nairana shot down Ju 290 9K+FK of FAGr 5 over the Bay of Biscay. The afternoon of the same day, Sub Lieutenants Mearns and Wallis attacked two more Ju 290s, Mearns shooting down 9V+GK piloted by Kurt Nonneberg, which ditched in the sea. The other Ju 290 disappeared on fire into cloud and was assumed to have crashed.

As the Battle of the Atlantic swung irrevocably in favour of the Allies with the loss by the Germans of French bases in August 1944, maritime reconnaissance unit FAGr 5 was withdrawn eastwards and the remaining Ju 290s were reassigned to transport duties, including service with KG 200, where they were used to drop agents behind enemy lines and other special missions.

Ju 290 A-5, works number 0178, D-AITR, Bayern of Luft Hansa flew to Barcelona on April 5 1945, piloted by captain Sluzalek. The aircraft suffered damage to its landing gear on landing and was repaired with parts brought from Germany by a Luft Hansa Fw 200. It remained in Spain because the Spanish Government ordered that regular Luft Hansa flights on route K22 be terminated from 21 April and was turned over to the Spanish authorities.

Planned but Not Happening Flights to Japan
Following the invasion of the Soviet Union in June 1941, plans were made to connect Germany and Japan by air using Luftwaffe aircraft modified for very long range flights. Commercial flights to the Far East by Luft Hansa were no longer possible, and it had become too dangerous for ships or U-boats to make the trip by sea. Field Marshal Erhard Milch authorized a study in to the feasibility of such direct flights. Various routes were considered, including departing from German-occupied Russia and Bulgaria. Nautsi, near Lake Inari in the north of Finland, was finally selected as the optimum starting point for a great circle route along the Arctic Ocean then across eastern Siberia, to refuel in Manchuria before completing the flight to Japan.

In 1943, the Ju 290 was selected for the flights and tests began in February 1944 of a Ju 290 A-5 (works number 0170, KR+LA) loaded with 41 tonnes (45 tons) of fuel and cargo. Three Ju 290 A-9s (works numbers 0182, 0183 and 0185) were modified for long-range work at the Junkers factory in March 1943. The plan was eventually put on indefinite hold after the Japanese failed to agree on a course, as they did not want to provoke the Soviet Union by an overflight of any part of their Siberian territory, and the three aircraft were eventually transferred to KG 200. 0182 was lost in action in Russia, 0183 was wrecked at Travemünde, and 0185 was found to be unrepairable following a mission in Russia, all during 1944.

The Japan flights were revived again in December 1944, mainly to transport Luftwaffe General Ulrich Kessler to Japan as a replacement for the German air attaché in Tokyo. Ju 290 A-3, no. 0163, was flown to Travemünde for the necessary modifications, but the work was delayed and it was decided to send Kessler aboard the submarine U-234 instead. The aircraft was destroyed on May 3 1945 as British troops arrived. Some sources claim that the trips to Japan actually took place, departing from Odessa and Mielec and landing in Manchuria. Bring me Proof!
Posted by Mitch Williamson at 11:26 PM