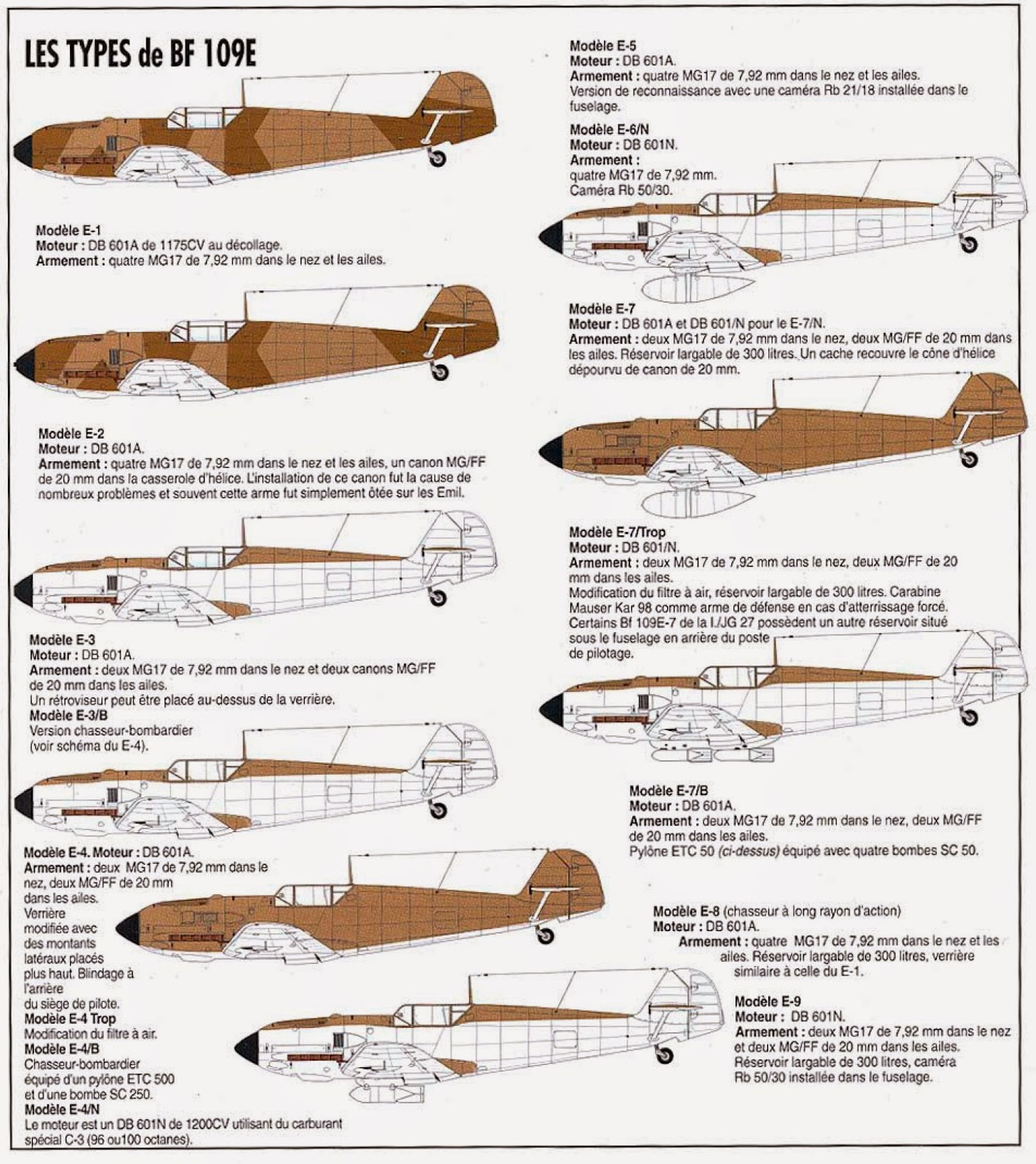 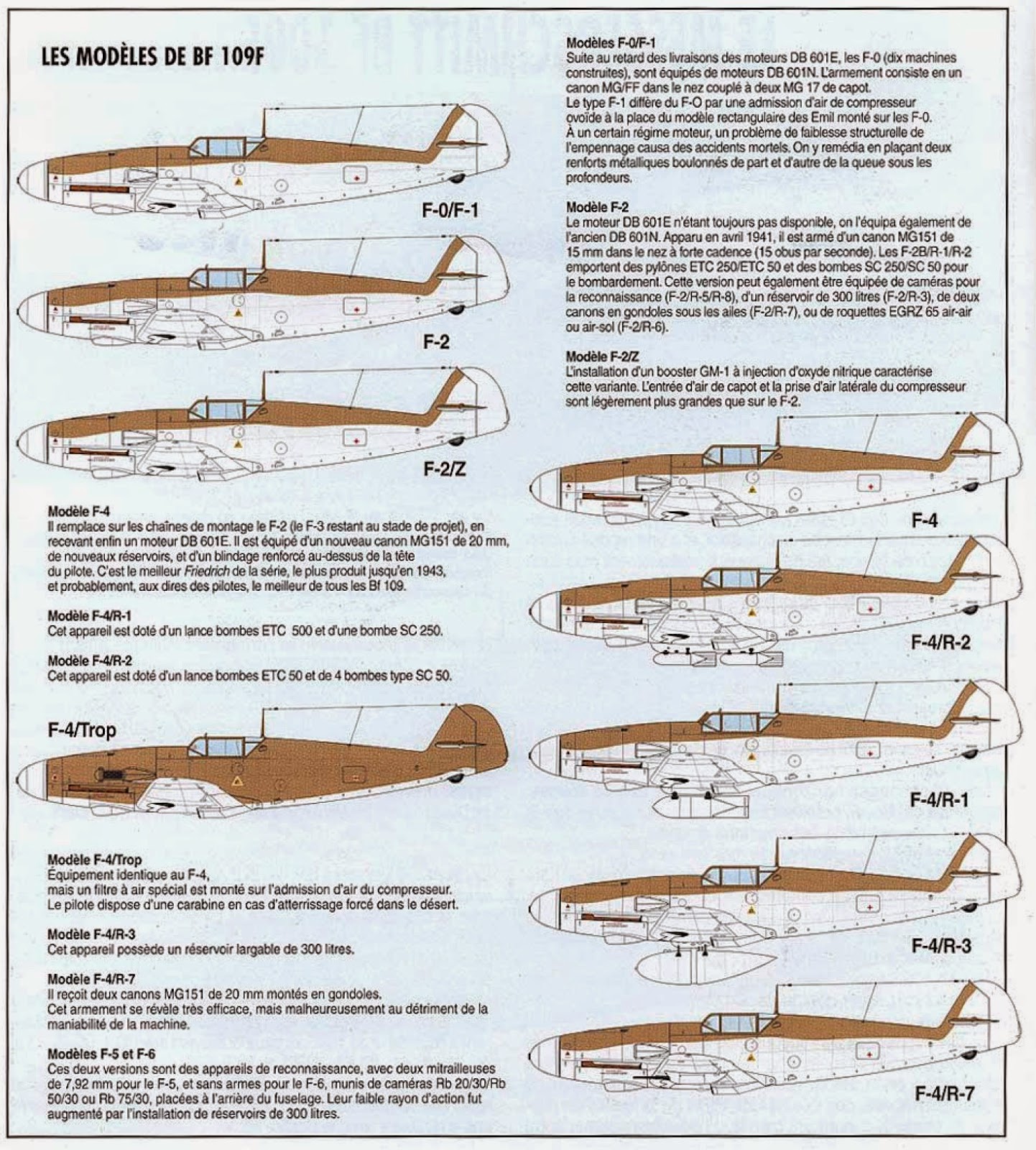 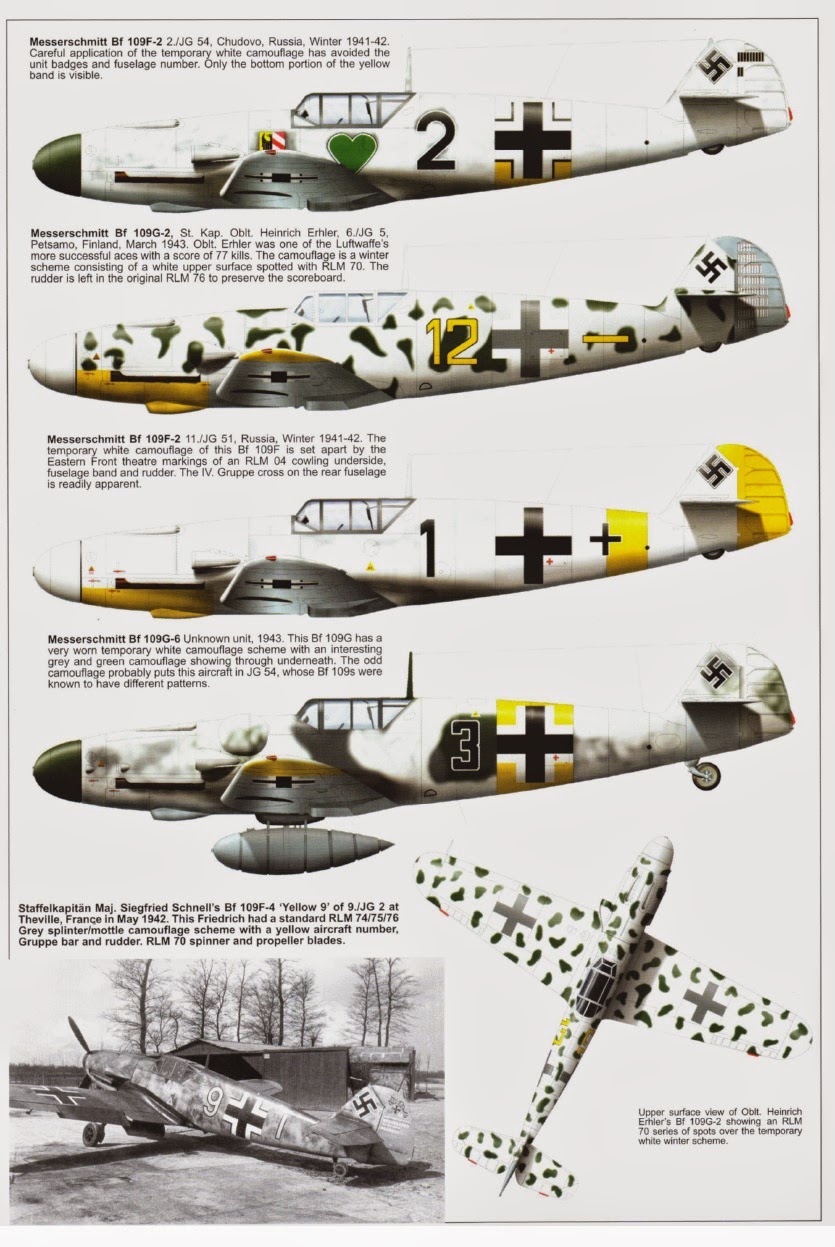 By the beginning of World War II in September 1939, the Luftwaffe had standardized its fighter Geschwader on the Bf 109. The Bf 109D series, although produced in fairly large numbers and still in service, was already giving place to the Bf 109E (widely known as the 'Emil'). Ten pre-production Bf 109E-0s appeared late in 1938 with two nose-mounted 7.92 mm (0.31 in) MG 17 machine-guns and two in the wings, and powered by the 1,100 hp (821 kW) DB 601A engine, which promised to solve the reliability and other problems of the DB 600 which was to have been used by the 'Dora'.

Production Bf 109E-1s started leaving the Augsburg factory at the beginning of 1939 with alternative provision for two 20 mm MG FF cannon in place of the wing machine-guns, although late delivery of the new engine meant that the first few Es to come off the line were put into storage to await their engines! Maximum speed was 570 km/h (354 mph) at 3750 m (12,305 ft) and service ceiling 11000 m (36,090 ft), performance figures which helped the Bf 109E to eclipse all of its opponents in the first eight months of the war. A sub-variant, the Bf 109E-1/B, introduced soon after, was a fighter-bomber capable of carrying a 250-kg (551 lbs) bomb under the fuselage.

Production of the Emil was shifted from Augsburg to Regensburg in 1939 (to make way for the Bf 110 twin-engined fighter) as a massive subcontract programme was undertaken by Ago, Arado, Erla and WNF, 1,540 aircraft being delivered that year. Despite deliveries of 10 Jumo-engined Bf 109Cs, and thirty Bf 109Es to Switzerland, Bf 109E deliveries were almost too fast for the aircraft to be absorbed by the newly forming Jagdgruppen. Nevertheless, on the eve of the invasion of Poland the Jagdverband comprised 12 Gruppen flying 850 Bf 109E-1s and Bf 109E-1/Bs and one with Ar 68s. Some 235 Bf 109D-1s were still serving with the Zerstörergeschwader. A handful of Bf 109Bs were on charge with II/ZG 1, while I/JG 21 had a few Bf 109Cs on charge. Five Bf 109 Gruppen actually participated in the invasion of Poland, with just over 200 aircraft. 67 Bf 109s were lost, most, but by no means all, to ground fire. The first occasion on which Bf 109s fought the RAF was during the daylight raid by 24 unescorted Vickers Wellingtons on Wilhelmshaven on 18 December 1939, 12 of the bombers being destroyed for the loss of two Bf 109Es of JG 77.

In 1940 production of the Emil increased to 1,868 aircraft, the D-series being almost entirely discarded from front-line use. Principal sub-variants produced that year were the Bf 109E-2, Bf 109E-3 (with two 7.92 mm MG 17s in the nose and two in the wings, plus an MG FF/M firing through the propeller shaft) and the Bf 109E-4 (with two nose MG 17s and two wing MG FF cannon). All these versions saw widespread action during the Blitzkrieg against France and the Low Countries (with sixteen Gruppen), and in the great daylight battles over southern England during the Battle of Britain. When employed in the 'free chase' tactic they proved deadly, the combination of experienced pilots and fast Bf 109 proving generally superior to the mostly novice RAF pilots in their Hurricanes.

The Bf 109s initially bettered even the Spitfire, except in what became, in the Battle of Britain at least, the all-important arena of turn performance. The Bf 109E, though suffering heavy attrition, wreaked havoc on the RAF's fighters, but simple arithmetic was against it. The Bf 109 had insufficient fuel to stay and fight for more than a few minutes, and damaged aircraft inevitably failed to make it home, while downed pilots became prisoners of war. Similarly damaged RAF aircraft and downed RAF pilots were usually airborne again within hours. Moreover, as is now well known, the capabilities of the Bf 109E were frequently squandered when the aircraft were too often tied to close escort of bomber formations, a role in which the Bf l09Es were deprived of their greatest assets, speed and manoeuvrability. At the same time, the enemy was not slow to learn from his mistakes, and RAF fighter pilots rapidly ditched the cumbersome pre-war tactics which had led to so many losses.

Unfortunately for the RAF, it was less easy to switch from the small-calibre light machine-gun armament used on most RAF fighters, and which proved ineffective against most targets, unless the pilot could get close enough to score multiple-hits. Nevertheless, by the end of the Battle, the Luftwaffe had lost 610 Bf 109s (of an overall total of 1,792 aircraft destroyed on operations) while the RAF's 1,172 losses included 403 Spitfires, 631 Hurricanes, 115 Blenheims and 23 Defiants.

These figures obscure the fact that RAF losses were falling, while Bf 109 attrition was reaching worrying levels. Later in the Battle of Britain the Bf 109E was also employed as a fighter-bomber (the Bf 109E-4/B), proving particularly difficult to intercept. Jabo versions of the Emil were later used with great success in other theatres, one such aircraft successfully sinking the British cruiser HMS Fiji during the invasion of Crete in 1941. Other variants, which appeared soon after the Battle of Britain, included the Bf 109E-5 and Bf 109E-6 reconnaissance fighters, the latter with Daimler-Benz DB 601N engines, the Bf 109E-7 with provision for belly drop tank, and the Bf 109E-7/Z with GM-1 nitrous oxide engine boost.

Early in 1941 the Emil was beginning to appear in the Mediterranean theatre, with tropicalised versions of the above sub- variants serving with JG 27 in North Africa. Here the combination of experienced pilots with Bf 109Es were able to repeat their success against the RAF, though scoring mainly against ageing Hurricanes and Kittyhawks. By the time Germany opened its great attack on the Soviet Union in June 1941, the Bf 109F series was beginning to join the frontline fighter squadrons, although the Emil provided one third of the fighter strength for the initial assault and continued to serve for a long time yet, especially in the ground attack role.

Powered by the 1,300 (969 kW) DB 601E, the Bf 109F was generally regarded as the most attractive of the entire Bf 109 family, and its design represented almost a textbook exercise in drag reduction. It introduced extended and rounded wingtips and an enlarged spinner, while Frise ailerons and plain flaps replaced the Emil's slotted flaps. A fully retractable tailwheel superseded the earlier fixed type, and a cantilever tailplane, without bracing struts, was introduced. In the matter of gun armament, however, the Bf 109F was widely criticised, for it deleted the wing-mounted 20 mm Rheinmetall-Borsig (Oerlikon licence) MG FF cannons in favour of a higher-velocity 15 mm Mauser MG 151/15 cannons firing through the propeller hub with two 7.92 mm (0.31 in) MG 17s above the nose. While this tended to satisfy the German Experten (aces) as benefiting the aircraft's performance, it was pointed out that the majority of Luftwaffe fighter pilots needed a heavier armament with which to achieve a 'kill'.

Pre-production Bf 109F-0s were evaluated by the Luftwaffe during the second half of 1940, and Bf 109F-1s were delivered early the following year. Both initial variants had an engine-mounted 20 mm Rheinmetall-Borsig MG FF due to shortages of the 15 mm Mauser MG 151/15 cannon. A number of accidents indicated that removal of the tailplane struts left the entire tail unit vulnerable to sympathetic vibration at certain oscillating frequencies of the engine, and strengthening modifications were quickly put in hand. With these in place the Bf 109F proved superior in performance and agility to the Emil, and many pilots preferred its handling characteristics. Thereafter, the increasing weight and engine power which accompanied the essential stream of modifications steadily degraded the Bf 109's handling characteristics. After the Bf 109F-2 (with 15 mm MG 151 finally replacing the 20 mm Rheinmetall-Borsig MG FF) came the principal version, the Bf 109F-3, early in 1942 with a top speed of 390 mph (628 km/h) at 21,980 ft (6700 m).

Bf 109Fs had joined the Geschwaderstab and III Gruppe of Adolf Galland's JG 26 'Schlageter' early in 1941 on the Channel coast, and during the early stages of Operation Barbarossa in the East this version equipped Major Gunther Lutzow's JG 3 'Udet', Werner Molders' JG 51, Major Gunther von Maltzahn's JG 53 'Pik As' and Major Johannes Trautloft's JG 54. The superiority of the new fighter (even over the Spitfire Mk V in the West) quickly became apparent as the German fighter pilots' victory tallies soared.

The 'Friedrick' underwent progressive improvement and development: the Bf 109F-4 had an MG 151 rebarrelled to 20-mm, while also introducing morale-boosting windscreen and cockpit armour, and the larger F2Z supercharger, the Bf 109F-4/R1 could be fitted with a Rustsatz (field conversion kit) comprising two 20 mm MG 151/20 cannons in underwing packs for the bomber-destroyer role, the Bf 109F-4/B fighter-bomber was capable of carrying up to 1,102 lbs (500 kg) of bombs, and the Bf 109F-5 and Bf 109F-6 reconnaissance fighters were introduced later in 1942. It was principally in the tropicalised Bf 109F-4 that the 22-year-old Oberleutnant Hans-Joachim Marseille became the highest-scoring Luftwaffe fighter pilot in the West with 158 air victories, although he died bailing out from a Bf 109G-2 on 30 September 1942 in North Africa.

The Bf 109G (dubbed the 'Gustav' by German pilots) was introduced into service in the late summer of 1942 and came to be built in larger numbers than any other version, serving with more units, although its characteristics were such that it rapidly came to be regarded as Germany's second fighter, the Focke-Wulf Fw 190 equipping the most important units. The emergence of the Spitfire Mk IX and P-51D had finally shown the Bf 109 to be on the verge of obsolescence, and to counter this, Messerschmitt finally sacrificed handling and manoeuvrability for outright performance. The Gustav was thus powered by the much heavier 1,475 hp (1100 kW) DB 605A, although pre-production Bf 109G-0s retained the DB 601E.

The Bf 109G-5 introduced the DB 6O5D engine with MW-50 water-methanol power boosting (making possible a maximum power of 1,800 hp/1343 kW for combat bursts), while the Bf 109G-5/R2 featured a taller rudder and lengthened tailwheel leg in an effort to counter the aircraft's swing on take-off. Ever since the introduction of the Bf 109F had removed wing-mounted guns from the 109, a controversy had raged over how a fighter should be armed. In the hands of an expert the Bf 109F's three guns were adequate against fighter targets, but the quality of Luftwaffe gunnery training had steadily declined (young pilots being expected to learn most of their skills on the job) and the Bf 109's most important targets had become heavily armoured Russian Shturmoviks and large American bombers, making three relatively slow-firing guns clearly inadequate. Therefore the Bf 109G-5 introduced a basic armament of a single hub-firing 30 mm MK 108 cannon, and two nose-mounted MG 131s, whose larger breech blocks were covered by the distinctive 'beulen'.
Posted by Mitch Williamson at 5:13 PM