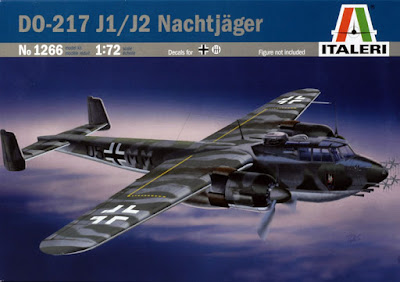 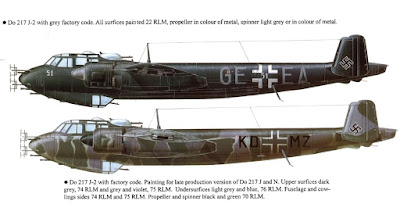 In 1941, with Germany under increased night-time attack by the bombers of RAF Bomber Command, and with shortages of the Messerschmitt Bf 110 and the preferred Junkers Ju 88C night fighters, it was decided to supplement the night-fighter force with a version of the Do 217E, despite its much greater size and weight. This aircraft, the Do 217J, was fitted with a new "solid" nose ,similar to that used by Dornier in night fighter versions of the Do 17 and Do 215, with four forward firing cannon and four machine guns. By October 1940, the production of heavy night fighters, and night fighters such as the Do 217 and Ju 88, had been discussed comprehensively and by 5 November 1941 these discussions had been concluded. On 23 November the Technische Amt (T.A) had ordered the Dornier bomber fleet to be withdrawn in accordance with a decision made earlier that year on 23 May. Dornier designated the subject of their new project the "Do 217Z", later renamed the Do 217J. The Japanese Imperial Navy and Japanese Army Air Force had also taken an interest in license building the type in the summer, 1942 demonstrating the types potential. The Luftwaffe had no intention of delivering the Do 217 to Japan. Owing to this none were ever exported. The Dornier encountered many problems in procuring the BMW 801 engines required for the night fighter versions. Junkers had also struggled with BMW deliveries, its Ju 88C variants were to be powered by the BMW as the initial Jumo 211B/F engine plan had been abandoned. The Do 217s competitor, the Ju 88C, had only five fixed guns, whereas the Dornier could hold eight. In most cases, the Ju 88C carried only one MG 151 and up to four MG 17s.

In January 1941 Junkers concentrated on the C variant designs. It planned on producing 60 C-4s and 374 C-6s powered by Jumo 211s. It later transpired to Dornier that Junkers also wanted the BMW 801 to power the C-6. The power plants would also be supplemented with GM-1 nitrous oxide injection engine performance boosters for greater performance or alternatively, using the new, more powerful Jumo 213. The Ju 88s weaponry was improved by the addition of one or more MG FFs in the fuselage. Both the Do 217 and Ju 88 used the FuG 202 Lichtenstein BC sets, but later Ju 88s were given FuG 212 Lichtenstein C1s and later FuG 220s. The equipment of the Dornier did not change. Against this competition Dornier needed to improve the types abilities as a night fighter. The first problem Dornier attempted to overcome was long and short range capabilities. A modified E-1, (Wrk Nr. 42) was used to test the equipment for the forthcoming Do 217J. During testing the characteristics of the various types fire extinguisher hardware were carried out. Performance trials were carried out in January 1942 using a E-2, Wrk Nr 1122 which was put through its paces at the Löwental testing facility.

Dornier intended the prototype to ready by February 1942. The machine, Wrk Nr 1134, was a modified E-2 was equipped with FuG202 and a Spanner-Anlage Infrared gun sight. These systems enabled the Dornier to detect the heat signature heat seeking detection at limited range making the Dornier a good proposition for the Defense of the Reich campaign. Unfortunately the prototype crashed owing to engine failure. The continuing slow development of the IR equipment precluded its use in the J-1. Work on the IR program was sped up until late 1943. Modified IR equipment appeared in 1945 and was installed in the Ju 88G-6.

Delays of BMW 801 engine deliveries forced the project to be temporarily abandoned. In November 1941 the directive for the design team had been a J-1 with a spanner, IR system, and a J-2 with Lichtenstein radar. In 1942 the directive changed slightly, and the J-2 was to be fitted with AI radar. Specifically, the Dornier was to be armed with four MG FF and MG 17 fuselage mounted cannon for bomber assault, and one MG 131 in the B-Stand and C-Stand positions for defence from RAF night fighters. Curiously, the night fighter version was ordered to be able to carry eight 50 kg bombs so the type could act as a night fighter and intruder over enemy territory.

The electronic equipment to be installed was listed as the FuG X, 16, 25 Peil G V air-to-ground communications and blind landing devices. The FuB1.1 was also listed as a potential piece, and if possible a FuG 101 radio equipment was to be fitted as standard. It was intended to J-1 with the Lichtenstein DB FuG 202, which had an effective range of 4,000 metre, with three tubes and a rear-mounted aerial. The weight of the equipment would reduce the performance of the J-1 by 30 – 40 km/h so in January 1942, Dornier opted to install the IR spanner equipment instead of the Lichtensten. A rear braking system had also been in the original plan, but it was deemed unnecessary. The design was declared ready on 5 January 1942 and first flew later that month. The prototype was delivered to the Tarnewitz test facility where gunnery trials took place with MG FF and MG 17 weapons. Satisfied with the performance, series production began in March 1942. 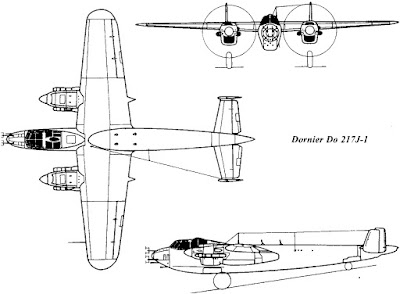 Do 217 J-1
The operational Dornier night fighter, redesignated J-1, before entering operations was powered by BMW 801L engines. It was fitted with a revised crew compartment housing a crew of three, with a solid nose housing four fixed 7.92-mm MG 17 machine guns, with four 20 mm MG FF/M cannon in the forward part of the ventral gondola. It retained the MG 131s in a dorsal turret and ventral position of the bomber, and was could carry eight 50 kilograms (110 lb) bombs in the rear bomb-bay, with a fuel tank in the forward bomb-bay.

Production had commenced in March 1942, during which eight J-1s were built. In April, 13 followed and 55 were built in May. Despite this start production declined in June and this trend continued until November 1942, when only four were built. Dornier had been ordered to withdraw Dornier airframes for unspecified. Owing to this, by 31 December 1942, only 157 J-1s had been completed. Dornier kept a production run of 19 aircraft for evaluating equipment. These were to be used when Josef Kammhuber, General of the Night fighters demanded the J-1 to have a modified fuselages made available for upward firing cannon installed within the dorsal areas of the fuselage, above the wing roots. This armament configuration was called Schräge Musik ("slanted" or "oblique" Music). A prototype was given four MG 151s in place of its MG FFs and named J-1/U1. The prototype was modified in September 1942 and sent to the Tarnwitz Experimental Establishment on 14 October for tests on gunnery performance. The guns delivered 125,000 rounds during tests without problems. The concept was available for adoption, although Dornier had some reservations about the slow firing pattern of the MG 151/20.

The Dornier appeared to be a very effective night fighter with significant hitting power. However it attracted strong criticism from the Luftwaffe. The first J-1 was delivered to 4./Nachtjagdgeschwader 1 in March 1942. The crew complained it was too heavy, criticised its takeoff and landing characteristics. The pilot complained it had "too little performance reserve". The aircrafts high service loading and its poor manoeuvrability in aerial combat did not enhance its performance reputation. Part of the types performance issues lay with the fact the MG 131 defensive guns and bomb release mechanisms had remained, and been built into the J-1 to allow for its use as a bomber. With eight machine guns mounted in the fuselage and the supporting ammunition, the weight was increased and outweighed the Do 217E by 750 kg. Do 217 J-2
The J-2 night-fighter version of Do-217J was fitted with FuG 202 Lichtenstein radar in nose, and having the rear bomb-bay plated over. The MG FF/M of the J-1 were replaced by 20-mm MG 151 cannon. The J-1 was withdrawn from intruder duty following an order stopping night intruder raids against England,[77] while the J-2 proved disappointing as a night fighter, showing poor performance and manoeuvrability, although they were used for early trials of the Schräge Musik arrangement of upward firing cannon, three Js being used for tests in July 1942.[80] Between 130 and 157 were built.

There was little difference in design between the J-1 and J-2, save for the FuG 202 Lichtenstein C1 radar fitted to the later. The first C1 had been used in the Dornier Do 17Z-10. Production of the C1 began in full only after the Do 217J production had ceased. FuG 202 Lichtenstein radar continued to be used in Dorniers, although historian Manfred Griehl points out this was only according to the manuals.

Complaints were made by crews about the performance of the Dornier in comparison to other German types. On 12 May 1942 Erhard Milch ordered that Dornier cease all night fighter design. It was decided that the Ju 88 series only (Ju 88C-6) would continue to be developed and serve as a heavy night fighter. Strangely, the order was not passed onto the Dornier design team who continued to produce the N variant.
Posted by Mitch Williamson at 4:08 PM