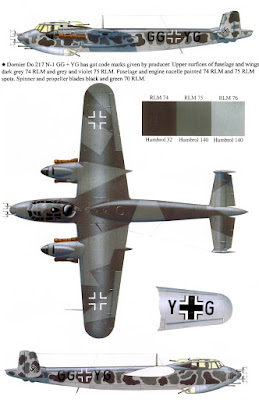 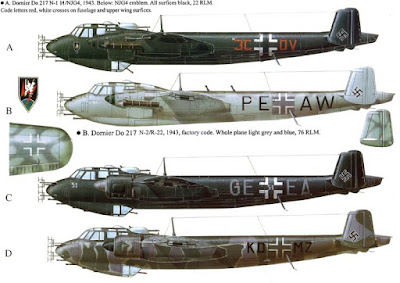 As was the case with every other German night-fighter, the Do 217N was developed as a variant on an existing aircraft. The starting point had been a bomber or reconnaissance aircraft which first flew in 1934. Development had continued via a number of intermediate stages, which had included the Do 17M and P, and in 1940 the Do 17Z night-fighter had been produced in the greatest possible haste more or less by converting the existing model. Since then there had always been one or more night-fighter variants in the Do 17 family, the Do 215 and the Do 217, during the various stages of development. Its external dimensions were:

and they remained unchanged until the Do 217, but the all-up weight of the Do 215B grew from the original figure of approximately 7 tons to virtually 9 tons as a result of demands for increased range, better equipment and more powerful armament. Although the landing wing loading was still below 115 sq m, the aircraft's dimensions were enlarged slightly for the more heavily armed and better equipped Do 217. By now the weight had risen to more than 13 tons.

There seemed to be little point in continuing development of this type of aircraft in view of the enemy's technical developments. Thus the path was clear for a decisive move towards the Dornier Do 335.

Posted by Mitch Williamson at 3:40 PM