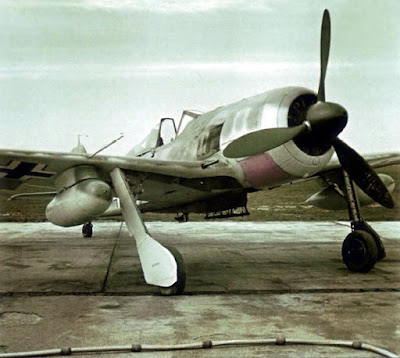 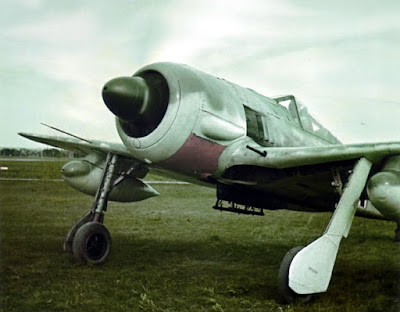 The Fw 190 A-5 was manufactured from November 1942 until August 1943. The U8 conversion was a long-range fighter-bomber (Jabo-Rei). Beneath each wing is a 300-l fuel tank on a so-called “Ju 87 Rack”. The tanks were not jettisonable and seriously reduced the aircraft’s maximum speed, consequently this type of rack was not put into production. Beneath the fuselage is an ETC 501, which could accommodate a bomb or auxiliary fuel tank. When this rack was fitted, it was standard practice to lengthen the mainwheel fairings to at least partly replace the missing wheel well doors.

The MG FF cannon in the outer wings and the fuselage-mounted MG 17 machine-guns were removed, and armament was limited to two MG 151 cannon in the wing roots. Note the unusual red underside of the engine cowling. The photograph was taken in the summer of 1943, however the unit to which the aircraft belonged is not known. It has a factory-applied camouflage scheme of RLM 74/75/76 supplemented by patches of 74/75 on the fuselage sides. Photo by Hauptmann Rolf Schödter III./JG 26’s technical officer

Posted by Mitch Williamson at 5:48 PM