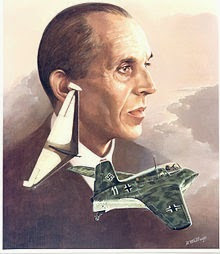 • April 15, 1936 Hans von Ohain is hired by Dr Ernst Heinkel to create a working example of his jet engine.

• Circa February 28, 1937 Von Ohain’s first working jet engine, the HeS 1 is completed and installed in a test rig.

• Early 1938        Design work begins at Heinkel on an aircraft that can be powered by Von Ohain’s new engine. At Junkers, Wagner begins construction of his own experimental turbojet engine.
• Autumn 1938  German aero engine manufacturers Daimler-Benz, BMW, Brandenburgische Motorenwerke (Bramo) and Junkers are encouraged to look at turbojet development by the Reichsluftfahrtministerium (RLM).

• December 1938             Messerschmitt receives a contract to carry out feasibility studies for the design of a single-seat fighter with turbojet propulsion.

• January 2, 1939              Glider designer Alexander Lippisch is transferred from the Deutsche Forschungsanstalt für Segelflug (DFS) to Messerschmitt, after completing the ultimate civilian development of his work on tailless aircraft, Entwurf X or ‘Design 10’, his previous project for the DFS having been the Storch IX or ‘Stork 9’. This was later officially designated the DFS 194 by the RLM. He immediately begins work on modifying the DFS 194 design, originally intended to be driven by a propeller at the rear, to accommodate a Walter R I-203 rocket engine.

• January 4, 1939              Heinkel and Messerschmitt each receive a contract to begin work on the design of single-seat fighter aircraft with turbojet propulsion – ‘Jagdflugzeuge mit Strahltriebwerk’.

• June 7, 1939    The Messerschmitt P.1065 design, intended to be powered by two wing-mounted BMW jet engines, is submitted to the RLM. The RLM asks Messerschmitt to produce a mock-up of the design.

• October 16, 1939          Work on fitting Lippisch’s DFS 194 with a Walter rocket motor is completed and ground tests begin. It is found that making the engine an integral part of the airframe is a fundamentally bad idea – making it difficult and dangerous to service and repair.

• Circa 1940        Messerschmitt’s designers begin work on a parallel project to the P.1065 – the smaller P.1070 – which has a tricycle undercarriage and its engines mounted in its wings.

• Circa spring 1940           The RLM asks Arado to design a bomber/photo reconnaissance aircraft that can be powered by either Junkers or BMW jet engines.

• Winter 1940    Work on the first prototype of the rocket-powered Messerschmitt Me 163, a development of Lippisch’s DFS 194, is completed.

• July 14, 1941   Following the invasion of the Soviet Union, Hitler issues Führer Directive No. 32 (Supplement), restricting the allocation of non-war-essential military equipment development contracts. Work on new jet fighter types for the Luftwaffe comes to a halt. It is anticipated that victory in the East will be swift.

• October 24, 1941          Arado has finally come up with a concrete proposal for the RLM’s bomber/reconnaissance jet requirement – the E.370/IVa. It is examined by the RLM and an initial batch of 50 aircraft are ordered.

• September 1942           Although Me 262 V3 has been wrecked in an accident, its reliable performance convinces the RLM to reinstate the type’s formerly cancelled additional prototypes.
• November 5, 1942        Focke-Wulf produces drawings for a jet-engined Fw 190, using a powerplant of its own design.

• November 18, 1942      The RLM reduces its He 280 prototype order to just six examples plus one unpowered aircraft for high speed testing.

• December 10, 1942      With the tide of battle in the East turning against Germany, and with no imminent victory in sight, Erhard Milch orders into effect “an urgent development and production programme under the code word Vulkan. The programme encompasses jet-propelled aircraft and guided missiles, including associated equipment and the ground organisation necessary to support these activities”. The aircraft given top priority for procurement of equipment are the Me 163, Me 262, He 280, Me 328 and Ar 234.

• January 4, 1943              Focke-Wulf designer Julius Rotta sets out how the company will approach future jet design and suggests an aircraft layout similar to what will eventually be produced as the Heinkel He 162.

• January 22, 1943           At an RLM conference, Willy Messerschmitt proposes a jet-propelled version of the Bf 109, the Bf 109TL – which would bring together the fuselage of the Me 155 high-altitude fighter and the wing and undercarriage of the Me 309, both projected successors to the Bf 109 itself.

• May 25, 1943  Galland convinces Hermann Göring to have Messerschmitt drop its latest proposed Bf 109 replacement, the Me 209, in favour of all-out production of the Me 262.

• August 17, 1943             Me 262 production is delayed when a US bombing raid destroys fuselage construction jigs at Messerschmitt’s Regensburg plant, prompting the firm to move key departments to Oberammergau in the Bavarian Alps.

• January 1944   The first production batches of Me 163B-0 and B-1 airframes are completed but no engines are available.

• March 1, 1944                The Jägerstab (Fighter Staff), a committee of industrialists and RLM officials is established with the goal of reinvigorating Germany’s flagging aviation industry. This effectively ends the RLM’s direct involvement in aircraft production, allowing it to focus on research and development.

• Spring 1944     A requirement is issued by the RLM for a simple, quick and cheap to mass produce interceptor that is easy to fly and can be launched in large numbers to protect key targets from bombing raids, under the designation ‘Verschleissjäger’ or ‘Attrition Fighter’, as in swarms of these machines ‘wearing down’ the enemy’s bombers.

• September 8-10, 1944 A meeting is held at the Messerschmitt facility in Oberammergau where the four firms invited to tender for the ‘1-TL-Jäger’ requirement of July are supposed to present their initial designs for assessment. The Blohm & Voss submission is deferred since it is not yet ready. Focke-Wulf’s design is largely rejected and Junkers is invited to submit designs for the requirement, bringing the number of firms now involved to five.

• September 10, 1944     Just as the ‘1-TL-Jäger’ meeting draws to a close, the RLM invites Arado, Blohm & Voss, Fieseler, Focke-Wulf, Heinkel, Junkers, Messerschmitt and Siebel to tender submissions for a new requirement designated ‘Volksjäger’ or ‘People’s Fighter’. This calls for a lightweight fighter built from existing components and powered by a single BMW 003 jet engine.

• September 14-15, 1944              A meeting is held at the RLM’s offices in Berlin and five of the firms invited to tender for the ‘Volksjäger’ requirement present their designs – Arado, Blohm & Voss, Focke-Wulf, Heinkel and Junkers. Messerschmitt refuses to offer any designs while Fieseler and Siebel are unable to come up with anything suitable in the four days allowed. The Arado, Focke-Wulf and Junkers designs are quickly rejected.

• September 19, 1944     Yet another meeting is held to discuss the ‘Volksjäger’ finalists is held and all the original entries are reviewed – along with new entries from Fieseler, Focke-Wulf, Junkers and Siebel.

• November 28-29, 1944               Submitted designs for the ‘Verschleissjäger’ requirement are reviewed. None of the four finalists are rejected but they are ranked in the following order: Messerschmitt’s rocket-enhanced Me 262, Heinkel’s ‘Julia’, the Junkers/Messerschmitt 8-263 and Bachem’s Natter.

• December 15, 1944      Discussions take place at the RLM in Berlin regarding the five companies’ submissions to the ‘1-TL-Jäger’ requirement. The companies present their updated designs – Junkers presents its EF.128 for the first time – but no agreement can be reached on the system of calculation that will be used to compare their projected performances.

• December 19-20, 1944                During a meeting of the main design and development commission Willy Messerschmitt states that his company will henceforth no longer be involved in the development of Otto engine fighter except developments of the Bf 109.

• December 22, 1944      The He 162 M2 is flown for the first time. At a meeting, the ‘Verschleissjäger’ designs are reviewed again and the Messerschmitt/ Junkers 8-263 is chosen for further development. Development of the rocket-enhanced Me 262 is to continue, work on Junkers’ EF.127 ‘Walli’ is to be suspended and both Bachem’s Natter and Heinkel’s ‘Julia’ are to be cancelled.

• February 27, 1945         Technical specifications for the ‘Schlechtwetter– Tag– und Nachtjäger’ requirement are altered, making the designs submitted so far inadequate. On the same day, the Luftwaffe pilots fly a He 162 for the first time – He 162 M19.

• February 27-28, 1945  Further discussions take place at the RLM in Berlin regarding the five companies’ submissions to the ‘1-TL-Jäger’ requirement. No decision is reached.

• March 20-21, 1945       A final discussion takes place at Focke-Wulf’s Bad Eilsen facility regarding the submissions to the ‘Schlechtwetter– Tag– und Nachtjäger’ requirement. The designs submitted by Dornier and Focke-Wulf are apparently rejected.

• March 22-23, 1945       A final discussion takes place at Focke-Wulf’s Bad Eilsen facility regarding the five companies’ submissions to the ‘1-TL-Jäger’ requirement. Junkers apparently receives a development contract for its EF.128 design.

• May 1, 1945    JG1 ferry pilots try and fail to free the last two He 162s from their construction jigs at Rostock before the Heinkel facility is overrun by Soviet troops.

• May 3, 1945    British forces overrun Blohm & Voss’s headquarters in Hamburg. It is likely that work on all projects ended some time in mid-April.
Posted by Mitch Williamson at 9:18 PM