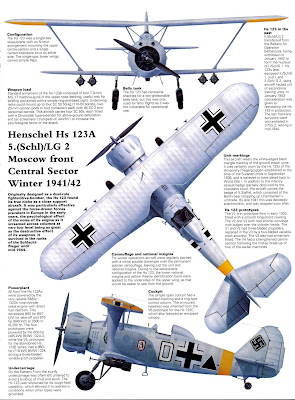 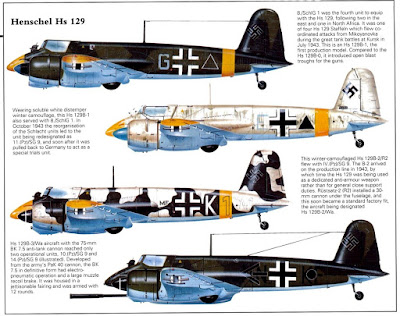 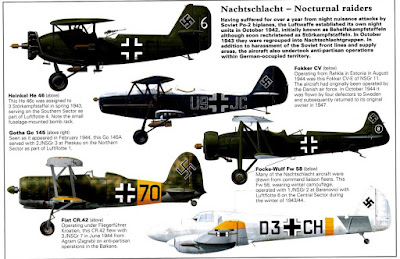 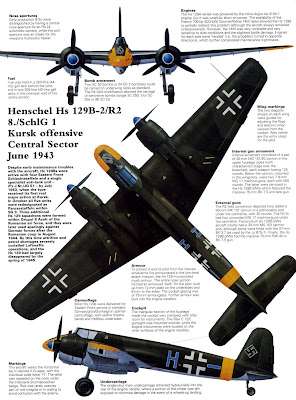 Escort for Dive Bomber Formations (Stukaverbande).
Ju.87 dive bomber units were largely manned by fighter personnel when they were set up. They therefore took on a special character which was always more closely related to the fighter arm than to the bomber arm. Outmoded in performance, slow in level flight and also in dives, inadequately armed both from the front and rear, the Ju.87 soon had to quit the Battle of Britain and the anti-shipping war. When German air superiority in Africa was lost the Ju.87 could not be employed without heavy losses even in the presence of fighter cover. On the Eastern Front, use of the aircraft was possible until the end of the war, with the losses from Russian fighters being less than those from ground defenses. In some respects the Ju.87 was the counterpart of the Il-2 used by the Russians.

The most conspicuous weakness of the Ju.87 formations lay, however, in their impossibly low formation flying speed of about 250 km per hour. The operational altitude of the Stuka in the Battle of Britain was about 16,000 feet and lower. In Russia they flew at about 6500 feet. Pull-out altitudes were set according to targets and ground defenses. The minimum pull-out altitude was about 1900 feet. On the Eastern Front the Stukas almost always went over to ground attack tactics after their bombing dive.

The single basic difference in the conduct of escort for Stukas Gu.87’s) compared to ordinary bombers is the special need for protection during the dive and during the re-assembly after the pull-out.

In practice this was accomplished by a part of the close escort. This was best done by the escort cover arriving at the pull-out altitude shortly before the Stukas and patrolling there. This pull-out altitude must be determined in advance in the field order. In case it is altered, all elements must be notified by R/T. The other part of the close escort dives with the Stukas, but because of greater diving speed this escort must resort to turning to hold position. A special danger exists from the time of the pull-out until the re-closing of the Stuka formation. It is not possible in this period for the fighters to protect each individual Stuka. Therefore it is the Stukas’ responsibility to keep formation at least in Ketten (3s) and to get as quickly as possible into closed formation. When they had to dive through cloud, or when the pull-out altitude was clouded in, this coordination did not work and losses resulted.

Ju.88 Formations.
Influenced by the concepts of pre-war times, German medium bombers like the Ju.88 and Do.217, even the heavy bombers like the He.177, had to be fitted for dive bombing attacks. Greater accuracy was supposed to be obtained by this. The disadvantages of this requirement were, with the exception of dive bombing against shipping, so great that the concepts must be now regarded as false. For the fighter arm, however, it did mean an aggravation of the job of escorting, first because of the diving itself and second because of the weak defensive armament of the bombers. As early as the Battle of Britain, the Ju.88 formations gave up dive bombing and went over to high altitude level bombing. As long as dive attacks were conducted, the fighters flew escort according to the principles laid down. Because of the inferior maneuverability of the Ju.88 compared to the Stuka, the dive and pull-out of the Ju.88 formations were even more spread out and the re-assembly took more time than with the Ju.87’s. The Do.217 and the He.l77 were practically never employed by day on dive bombing missions.

Bär’s Comments on Escort Missions for Stukas.
One important fact for the escort of Stukas is that the Stuka is very slow and vulnerable, therefore, rendezvous with the escort must be carried out with great certainty. In Africa, where during most of the campaign the threat of enemy fighters behind the German lines was not great, the following method of rendezvous proved to be good: For example, the Stukas flew over the fighter field at 6000 feet at 1500 hours. The fighters were ready in their aircraft on cockpit alert (Sitzbereitschaft) at 1455 hours. As soon as the Stukas appeared over the field, the fighters got the order to start. The Stukas flew on to the front and the fighters caught up. In this way, rendezvous was both sure and economical as far as fighter fuel was concerned. This type of rendezvous is, however, only possible where enemy forces are not strong enough to flyover the front. At the target it was important that a portion of the fighter escort dive with the Stukas (or fighter-bombers, or ground attack aircraft) to cover their most vulnerable moment as they pulled out of the dive. Radio communication between the fighters and the bomb-carrying aircraft proved well worth while. Radio silence is extremely important, especially when other formations are sighted. It is easily possible that a false sighting of enemy fighters will take place and the bomb carrying aircraft will jettison their bombs unnecessarily. Only the most experienced pilots and formation leaders should be allowed to announce the approach of enemy aircraft.

For missions of tank-destroying aircraft it is often advisable during the attack for the fighter escort to shoot up A.A. installations in the vicinity, to remove this greatest danger for the tank-destroyers.

Escort for Ground Attack Units (Schlachtverbande or Schlachtfliegerverbande).
In Spain, ground attack missions at low level were flown exclusively without fighter cover. If fighter opposition developed, the He.51 formations were able to defend themselves. The Legion Kondor fighter Staffeln, however, often entered the front area at the same time as the ground attack Staffeln and gave indirect escort by flying fighter sweeps in the general area. For operations against enemy airfields farther to the rear, a common time of arrival over target was given both fighters and ground units. No case is known to Galland, however, where actual immediate fighter cover was furnished for ground attack units in Spain. In the Polish campaign ground attack units with the slow Henschel 123 bi-plane operated completely without fighter escort.

In the French Campaign, in 1940, similarly, no fighter escort was flown for ground attack units. Fighter units were regularly sent in to sweep clear the combat area for the ground attack formations. Only one ground attack (Schlachtflieger) unit existed at this time, III (Schlacht) Lehr Geschwader 2, which was attached to Fliegerkorps VIII (Richthofen’s tactical air force) and was equipped with the Henschel 123 bi-plane. After the campaign in France, this Gruppe re-equipped with the Me. 109 fighter-bomber and was in combat together with Kampfgruppe 210 in the Battle of Britain. The missions which these two Gruppen flew in the Battle of Britain were not ground attack missions, but fighter-bomber missions. They were, of course, flown under fighter cover, because of the strong RAF fighter defense.

The Campaign against Russia was begun in 1941 with the single ground attack Gruppe, II/(Schlacht) Lehr Geschwader 2, which at the time had variously three Staffeln of Me.109’s and one Staffel of Hs.123’s, or two of Me.109s and two of Hs.123’s. In any event, the Gruppe needed no fighter cover, furnishing its own cover with the Me.109s. One other Staffel of the Gruppe was at this time being equipped with the Henschel 129, which was used more and more. Later these Hs.129 Staffeln specialized as tank-destroyers with the MK 101 cannon.

The setting up of two more ground attack (Schlacht) Geschwader in early 1942, with Me.109’s and Me.110’s, brought new demands for fighter cover. In III (Schlacht) Lehr Geschwader 2, fighter cover was still furnished by the Gruppe itself. Even the tank-destroying Hs.129’s, attached to the newly created Schlacht Gruppen, were covered during missions by fighter aircraft, Me.109s and Me.110s.

It frequently occurred that for concentrated offensives twin-engine bombers, Stukas, and ground attack units operated in uninterrupted succession, in the same area, for example, where a break through had occurred. For this period of massed activity, the area concerned was covered by an air umbrella of all fighters available not being used for the immediate escort of the bombers and Stukas.

Later, some Henschel 129 tank-destroyer Staffeln were attached to fighter Geschwaders to provide a striking force with heavy fire power for use against Russian tank breakthroughs. Because of the lack of HS.129’s this experiment was stopped. In addition, in Summer 1943 an operational concentration of all the Hs.129 tank-destroyer units was attempted. The use of the tankdestroyers en masse resulted in several successes. During this period, fighter escort for the Hs. 129’s was furnished by a fighter Gruppe especially subordinated to the tank-destroyers for this purpose. This was one of the few cases in which a sub-ordination of fighters for such cooperation was successful. For this special purpose it was worthwhile.

Starting in 1943 the ground attack units (Schlachtverbande) converted to F.W.190’s. Right after this the Stuka Gruppen began their conversion from Ju.87’s to F.W.190s and became not only nominally but also actually ground attack units (Schlachtgruppen). Fighter cover was not provided for them, however, except in special cases. For the purpose of protecting these ground attack units from enemy fighters, the chief method employed was the sweeping clear of the battle area by regular fighter units. Only the few remaining Stuka units required an actual fighter escort. No further alterations or developments occurred until the end of the war.

Southern Front.
In Africa there were first one and later two ground attack units with F.W.190’s. Operations were only possible with a ratio of escort to escorted aircraft of 1:1. With increasing Allied air superiority in Tunis, Sicily, and Italy their operations became more and more difficult and losses heavier. A single Hs.129 tank-destroyer Staffel which was in the Southern theater could not be used operationally at all and was transferred to the Russian front.

In June 1944 one ground attack unit was used on the invasion front, and it required strong close escort. Allied air superiority soon made the use of ground attack units impossible. No operational order could be carried out on time, since the Allied fighter umbrella hung almost continually over the fighter bases. Assemblies and rendezvous in the air were knocked to pieces or never even allowed to start. At the latest, on the way to the target area the formations of ground attack aircraft and fighter escort were engaged in combat with numerically superior enemy forces. Under such an oppressive enemy air superiority every type of planned mission was brought to a halt. Only in those surprise missions like the attack on Allied airfields on 1st January 1945 could anything be accomplished by the personal initiative of the immediate formation leaders. In conjunction with the air superiority of the Allied fighters and their good fighting spirit and ability, the Allied radar and fighter control organization deserves special mention. They succeeded in grasping every German air operation immediately
Posted by Mitch Williamson at 11:21 PM