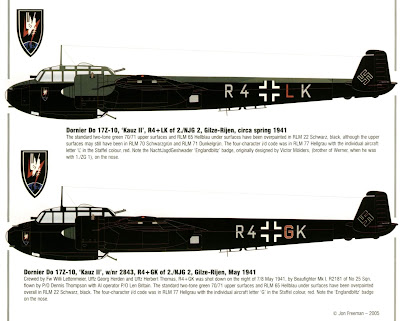 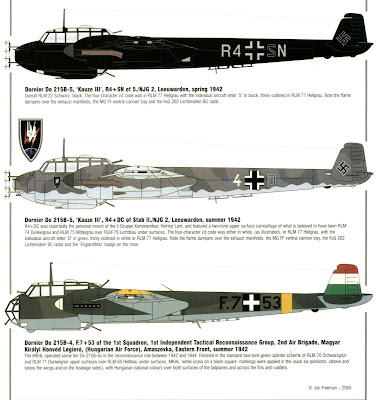 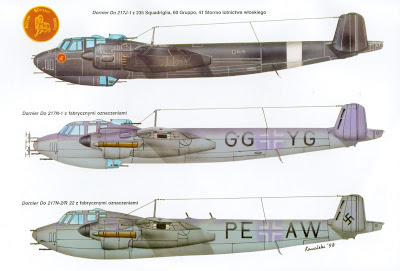 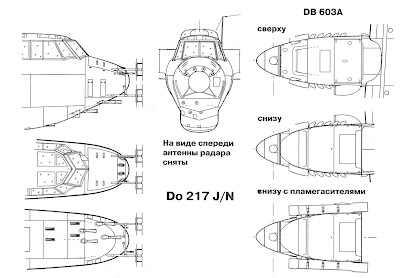 Often over looked during the Battle of Britain is the valiant attempts by the British RAF Bomber Command to counter the German Luftwaffe bombing with its own raids.   Suffering as heavily as the Germans, they switched to nighttime bombing as a way to avoid fighters.   Indeed, it was an accidental night bombing raid by the RAF bombers that saved England from defeat!   The Luftwaffe needed something to stop RAF bombers at night. They chose the Bf-109D, Me-110C, and Do-17Z's. This choice is a strong affirmation of the 17's potential as a nimble and fast fighter (passing over the Ju-88C for some reason), creating arguably the first custom built (rather then simple modification) night fighter!  These 'bombers' now became the test beds and foundation for all future night fighter designs; anything used by "Nachtjäger" squadrons was first tested on a 17Z or 215B-5.   The first 17Z-6 "Kazu" (Screech Owl) conversions ironically used an Ju-88c nose section, but was this was awkward and quickly changed to an original design, and renamed the 17Z-7.   There is a report of a Do-17P also being pressed into this roll. Still not satisfied with the performance, a new design built from experience with the early prototypes was created, resulting in the successful 17Z-10 "Kazu II". These were stripped of all excess weight and all but one defensive MG15, and then armed with 4x MG17 7.92mm machine guns and 2x MG/FF 20mm cannons and a first of its kind "Spanner-Anlage" Infrared searchlight and Detector (modern day FLIR).   The first 2 night fighter kills made by the new "Nachtjäger" force are credited to Do-17Z's shooting down 2 Wellingtons on 23 July 1940 (the day after NJG1's official creation).   After perfecting the designs with the 17Z's, the Luftwaffe then modified at least 20 of the faster 215's toward the end of 1940 (it is believed).   Airborne radar was not available until mid-1941, so the first non-radar equipped 215B-5 "Kazu III" could top 500kph (310mph), faster then most Ju-88's!   The leading night ace who flew 17's and 215's during this time was nicknamed "Dr. Night"; Ludwig Becker tallied 46 kills before he himself was shot down (in a ill planned daylight attack using Bf-110).   A 17Z-10 "Kazu II" was also used in developing airborne radar and the "Schrage Music" weapon system which was soon installed in 215B-5's, but that reduced its top speed to around 485kph.   The Do-17/215-night fighters served nearly two years before replaced by other aircraft types (Me-110, Ju-88c, Do-217, He-219).

The first 2 kills claimed by the Luftwaffe's newly formed Night Fighter squadron (NJG1) was made by Do-17Z-10's over a pair of Wellingtons.   It is important to note that NGJ1 did have Ju-88c's at their disposal, as well as Bf-109 and Bf-110's, so it is intriguing that the Do-17 was chosen as the lead platform for developing nightfighting hardware and tactics. Over time NJG1 continued to convert more Do-17's and then Do-215's, despite the fact its Ju-88c could have just have easily been chosen instead. In the latter half of 1940, the RAF's night bombing was making a mark so it was a priority project to counter this nuisance (note the accidental bombing of Berlin and Hitler's reaction), thus it is reasonable to assume they would use the best equipment to counter it, not "obsolete and surplus" Do-17's, a very interesting and telling fact on the performance of the type!   The first version, the 17Z-6, used the nose of a Ju-88c, but this marriage was not ideal, so a new nose was made, but used the same weapons.   The 17Z-7 was not satisfactory either, so an entirely new nose was made, with nearly double the armament of the 88c, the 17Z-10, and that was the arrangement used in all future versions.   A logical conclusion is that the 17 was far from out classed in 1940, and could still provide good service.

Fitted with the early FuG 202 Lichtenstein airborne radar and a Spanner infra-red searchlight, the third conversion was a Do 215B-5, named Kauz III. This was in use until mid-1942 when the larger, more powerful Do 217J-1 arrived with 4./NJG 1. The prototype of this fighter conversion of the Do 217E-2 bomber few in late-1941 and with a formidable armament of four 20mm and four 7.9mm guns, great hope rested on its arrival in service. Hope turned to despair when the crews experienced the type's poor maneuverability, insufficient power from the BMW 801 engines and that old problem which plagued a number of German designs, a weak undercarriage.

While Ju 88s and Bf 110s made up the bulk of the night-fighter force, Dornier persevered and with the J-1s relegated to training it delivered the Lichtenstein radar-equipped Do 217J-2 for service from early-1943. This proved marginally better but it was still too heavy and with the radar antenna cutting the speed down to less than an RAF Halifax bomber, it had limited success.

Another attempt was made with the Do 217N-1 which few on July 31, 1942. Re-engined with 1,750hp Daimler-Benz DB 603As it entered service late that year and showed much-improved performance. Additional to the nose armament, some aircraft received upward-firing cannon in the centre fuselage which allowed the German pilots to fly under the bomber and attack its unprotected belly, an arrangement also adopted for use in Bf 110s and Ju 88s.

With the new weaponry the Do 217N-2 entered service in spring 1943 but lasted less than a year before withdrawal from use. Production of all versions totalled 364.
Posted by Mitch Williamson at 5:25 PM No comments: